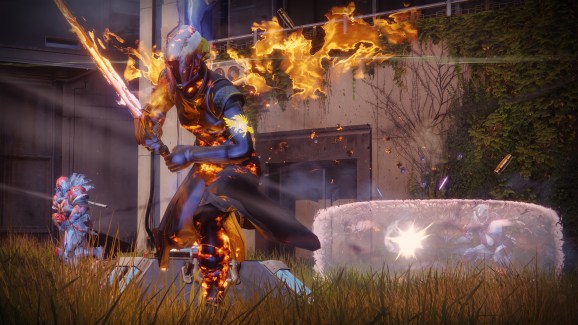 The biggest showdown this fall may not involve Call of Duty or Battlefield. No, this faceoff is between Destiny 2 PC and … Destiny 2 on PlayStation 4 and Xbox One.

Bungie (you know, that little studio known for creating Halo) is conducting a beta test on its highly anticipated online shooter, and GamesBeat PC Gaming editor Jeff Grubb is convinced that it looks, runs, and plays best on a personal computer, not a PS4 or Xbox One. How strong is this opinion? He even wants all of you — and your friends — to sit out the console launch next week and wait for it to hit Blizzard Entertainment’s Battle.net on October 24.

That’s a long time to wait, but he believes Destiny 2 is a special game. Activision built a tremendous amount of hype behind the original’s September 2014 release date, and its lack of stuff to do (among other issues) became a problem for players, and this intensified at the endgame. The first expansion addressed many of its biggest warts, and Activision and Bungie promise that the sequel will launch without those problems.

For PC gaming coverage, send news tips to Jeff Grubb and guest post submissions to Rowan Kaiser. Please be sure to visit our PC Gaming Channel. You can also enter our Intel-sponsored contest for an iBuyPower Snowblind gaming rig here.

P.S. Jeff begs you: Wait for Destiny 2 on PC. See why you should consider his plea.

PREVIEW: The designers of Orwell: Ignorance is Strength are pulling their story about surveillance and fake news straight from the headlines from U.S. President Donald Trump’s attacks on the media. These have put the spotlight on fake news, and Osmotic Studios is turning this reality show into a computer game. The original Orwell: Keeping an Eye […]

Tim Sweeney, the CEO of Epic Games and one of the game industry’s tech savants, has traveled the world to speak about his vision for a world of connected games with massive simulations and realistic digital humans who look and behave like real people. Sweeney gave a talk at the recent Devcom event in Germany. […]

Destiny 2 isn’t really coming out next week. I mean, sure — it’s launching on PlayStation 4 and Xbox One on September 6, but that’s not the real Destiny 2. After playing it on PC, I consider the console versions a cheap imitation of the legitimate article. The problem is that Bungie’s latest sci-fi shooter won’t hit […]

Overwatch’s Deathmatch mode is a great way to practice

“Git gud.” This is often the snarky reply to any Overwatch player who asks another how to get better at Blizzard‘s team-based shooter. But how, exactly, does one get good? Well, like in anything else, you practice. But practicing is hard to do in Overwatch. Enter the new Deathmatch mode, which gives players a place […]

Ever since releasing the original Grand Theft Auto in 1997, Dave Jones has been obsessed with making believable worlds. He worked on more recent online game worlds like the one in All Points Bulletin (APB), and at each point along the way, he ran into huge obstacles on a technological front. Now, he serves as president […]

PlayerUnknown’s Battlegrounds just did the impossible. It had more simultaneous players online through the Steam PC gaming service than Dota 2, according to data-tracking site Steam Spy. This is an incredible achievement because few releases have ever come close to threatening Dota 2’s concurrent player number. And that makes sense because Dota 2 is a […]

How (and why) we ported SHENZHEN SOLITAIRE to MS-DOS

Can two programmers who are accustomed to making games for modern computers with gigabytes of RAM and high-color HD displays port one of their games to MS-DOS? Neither of us had any experience developing on such old hardware, but since working within artificially limited systems is something of a Zachtronics game design specialty, we felt compelled to try! (via Gamasutra)

PCI-SIG which is the organization that designs the PCIe express standard has released a roadmap to the public showing off the blueprints for when the next PCIe standard will be upgraded. (via Dark Side of Gaming)

HP gave its Omen gaming line a big boost before this year’s E3 with the launch of new gaming PCs, peripherals, a GPU accelerator, and a VR backpack. While the company wants to provide devices for all kinds of gamers, its newest launch targets enthusiasts who don’t want to compromise power when choosing a portable device. (via Ars Technica)

PUBG players are farming for $300 skirts by going AFK

Big games like World of Warcraft and Team Fortress 2 helped popularize the practice of idling: logging into a game without playing it in the hope of passively receiving in-game rewards. In these games and others, players would join custom ‘idle servers,’ or use macros to automate their character movement, allowing them to literally and figuratively sidestep getting kicked for being AFK. (via PC Gamer)