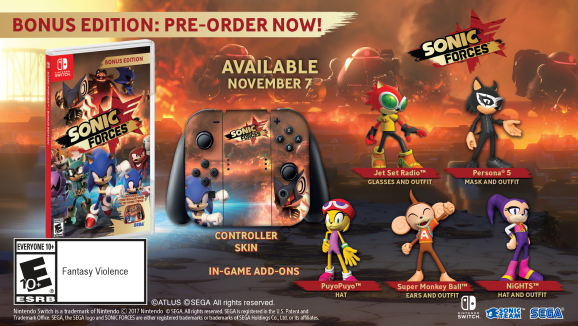 Classic Sega characters and a Persona star make for a nice bonus.

Sega announced today that Sonic Forces is coming out for PlayStation 4, Xbox One, Switch, and PC on November 7. Sega also revealed a special physical version of the game that will cost $40 and come with a controller skin and in-game character costumes based on some of Sega and Atlus‘s most famous stars (including the hero from Persona 5).

Sonic has already had one major release this year, but Sonic Mania wasn’t actually made by the studio — Sonic Team — that usually works on the franchise. While Mania took inspiration from the Blue Blur’s earlier days, Forces is more similar to recent games like Sonic Generations.

Forces could help continue Sonic’s great year … or it could leave us running back to Mania. Either way, Sega is surely looking at the numbers for both games as it plans Sonic’s future.

As with Generations, Forces will switch between levels for a Modern Sonic and a Classic Sonic. The Modern Sonic stages will be faster and feature 3D sections, while the Classic Sonic levels focus more on traditional 2D platforming. Forces also adds a new series of stages for a character that players create. This is the first time an official Sonic game has let fans make their heroes.