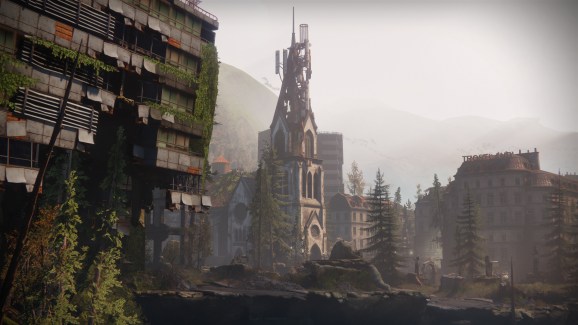 “Endgame” is typically a design element that we associate with massively multiplayer online role-playing games like Guild Wars 2, Star Wars: The Old Republic, and World of Warcraft. Endgame content preoccupies a player when narrative content and traditional methods of tracking player progression like leveling have tapped out. It’s the endgame content in an MMO that keeps players online and paying.

Endgame design has long troubled MMO studios. Some have called it “the worst thing that ever happened to MMOs.” But solutions do exist, one of which is to make sure that everything the player does is fun for its own sake. Endgame content should be worth repeating purely for the skill challenge, as players discover and want to test new weapons and abilities against familiar scenarios.

The original Destiny failed the endgame test. Crucible matches, strikes, weekly nightfall strikes, and raids were all Destiny had to offer players in September 2014, and they weren’t enough to satisfy the hardcore Destiny players that rapidly spent hundreds of hours logging into the game.

Perhaps Bungie expected to plug the endgame gap with activities set on the open-world maps of earth, the moon, Venus, and Mars. The patrol missions and bounties of vanilla Destiny are glorified errands, however. Landing headshots, scoring melee kills, scanning objects, and collecting items could only remain interesting for so long.

The Dark Below expansion added hive invasions. The House of Wolves expansion added Fallen skiff attacks. And The Taken King expansion added Taken infestations across all four of Destiny’s open-world maps. The Prison of Elders, the Court of Oryx, and Archon’s Forge co-op activities also became available over time. A new player today might be overwhelmed with quality choices for player-versus-environment endgame content.

The first Destiny’s open-world public events were erratic, and completing public events was sometimes necessary to finish a quest. Players addressed the problem by creating web-based trackers to try and pin down which public event would spawn on which planet at which time. The trackers weren’t always accurate, and it took a while to travel from planet to planet in Destiny 1. Anyone trying to track down public events spent a lot of time standing around and waiting.

Destiny 2 spares players the need to check an external tracker by displaying the times and locations of public events across all four of the upcoming sequel’s open maps. Destiny 2 players will also be able to fast-travel seamlessly among points of interest on all four worlds. That means players can cycle through all four open maps looking for a public event that’s about to touch down, teleport to somewhere near that location from anywhere else in the game, and then join the public event simply and smoothly.

In fact, chasing public events may become the most efficient way to grind for gear in Destiny 2. It would lead to a frenetic dash from world to world, facing a brutal progression of activities in order to roll some loot dice, and it would be glorious.

In addition to being predictable, public events in Destiny 2 will sometimes feature a new level of mechanics, making it possible for players to face a tougher challenge. Fighting six-legged Fallen Walker tanks is nothing new. Destiny 2 turns this familiar public-event type into something that looks borrowed from a raid.

When it becomes disabled, the Fallen Walker ejects arc charges that deposit into puzzle elements to unlock a second, more brutal version of the public event — where a second Fallen Walker joins the fray. When public events like these heroic versions force Destiny 2 players to cooperate, they become virtual training for the basic puzzle-solving teamwork required to be successful at raids.

The two Lost Sectors we explored in the European Dead Zone were holes in the ground that we jumped into, revealing caves of Fallen or Cabal enemies, which led to extremely close-range duels with powerful boss enemies. Lost Sectors were tough to solo. They are well suited to the casual Destiny 2 player who wants to log in for half an hour and still have something challenging and meaningful to do.

Patrols are the bane of the original Destiny. Players accessed them through glowing beacons embedded in the ground throughout the open maps. Patrols that involved killing enemies or gathering items were simple. They were also excruciatingly boring when presented as the mainstay of the available, open-world content.

Destiny 2 also features patrols. But when they are part of a much larger collection of other things to do, they don’t feel too tedious. That said, we’d much rather do adventures than go on patrol in Destiny 2 because adventures are like a rank-up for patrols.

Adventures feature the same sort of “kill X number of enemies” and “collect Y number of materials” tasks as patrols — but this time set in a narrative context. The adventure usually ends with a boss fight that any passing player can jump into. Several adventure endings in the open world began to feel like familiar spawns after many hours exploring the European Dead Zone, and I would often jump into adventure boss battles to help others out the way I’d been helped myself. So begins the spirit of a community.

Good endgame design is at the heart of Destiny 2

In addition to all the activities discussed above, we also found high-value, powerful targets — who dropped loot chests — wandering around in the middle of other activities. It was possible to be running a patrol, a public event, and be helping someone else with an adventure ending while taking down a high-value target simultaneously. It almost felt like there was too much to do, a complaint that Bungie would have been thrilled to hear when Destiny launched.

Small chunks of Destiny 2 need to be satisfying over weeks and months in order for Destiny 2’s endgame to have a chance at hooking players’ long-term attention. Based on our time spent so far in the European Dead Zone, Destiny 2’s open-world content is engaging, varied, and fun.

The claustrophobia of a Lost Sector versus a huge, explosion-filled adventure, followed by a conflagration of a public event that fades into a lazy patrol, with high-value targets constantly wading through all the other action, could be a short and eventful evening of Destiny 2 for the casual player.

Casual players are not the players that keep an MMO going for the long haul, however. It’s the endgame-focused power players that provide the driving momentum for an MMO and its community. How long will this plethora of open-world choices remain fresh when serious endgame Destiny 1 players like myself will be grinding the game for 18 hours a day?

No one will begin to get an answer before Destiny 2 releases on September 6.