Detsaridis: That’s another one of the differences between VR and other digital implementations. When looked at on a screen, especially on a tablet or a small laptop screen, while it’s certainly possible to run a bunch of animations, having all that stuff happening at once looks like visual noise, even if the animations are small. When you have the entire field of view in front of you — and Catan is on a big table – the pieces get to be larger than life. The “screen” is enormous. You can do cool things like have sheep run around or have water flow or have wheat blowing in the breeze without it looking like you’re peering into the inner workings of a wristwatch.

GamesBeat: Experiment 7’s VR games enable you to customize the room you’re playing in. Is that part of this as well? 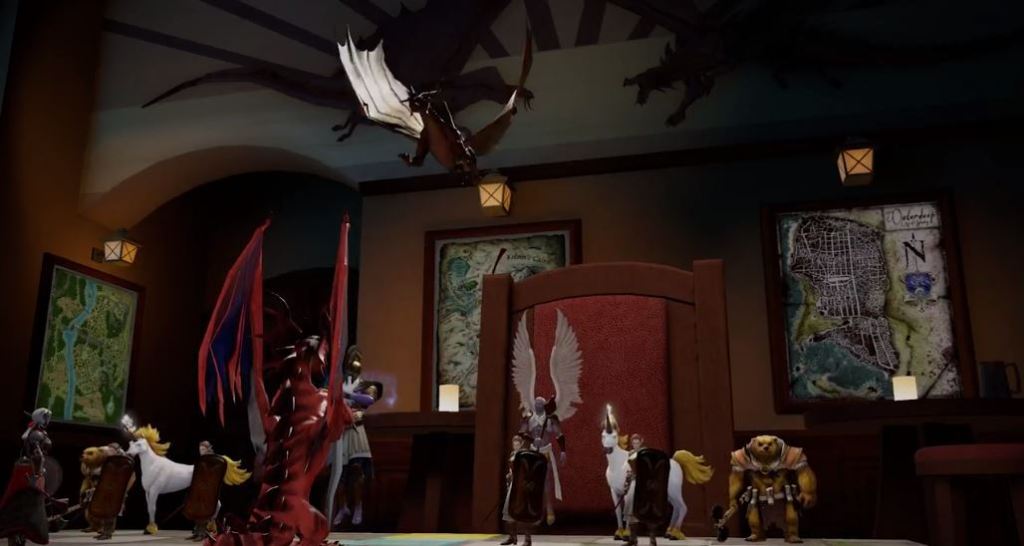 Above: All of Experiment 7’s magic table games have custom game rooms. See the Waterdeep and Icewind Dale maps on the wall?

Zatkin: Absolutely. That is part of our signature.

Detsaridis: We’re also doing something I hope Catan players have really wanted for a while, which is, the place you play the game in—can I say this? I guess I can, I’m saying it.

Detsaridis: That will animate as well. There’s a little sense of, oh, man, that’s Catan out there. We hope to answer a little bit of that. Where is this, actually? What would it look like if I was in a room on this island? Kind of making the theme of Catan, the flavor of it—it’s something that’s always in the background when you’re playing other versions. We’re dunking you in it and giving you the sense of, OK, these are Vikings who have settled on a Mediterranean island. It comes through a lot more when you’re in the landscape.

GamesBeat: Aside from the manipulation of pieces, what’s the most challenging thing about adapting a management board game to VR when it comes to user interface?

Detsaridis: We could talk about this for hours.

Zatkin: There’s a lot of different actions that can be done in Catan. In a lot of cases we’re trying to—it’s not like we’re ever going to remove or modify them, but it’s figuring out how we lump them together in the easiest thing to use. We want to make sure that you’re always playing against your opponents or the AI. You shouldn’t be playing against the game and the game interface. In a lot of cases, VR is so new—the interface is probably the most interesting bit. We don’t have a side of the screen to hang things on. It’s finding new placements that don’t—it’s 3D, so you can obstruct the board if you put things in the wrong area. If you put it too close to the player it feels claustrophobic. If you put it too far away you can’t read it. It’s finding the happy medium spot on a game that supports four players with information per player that you want to know, while making it feel like there’s no interface and this is just your happy spot that you can float and interact with. It’s a combination of the information density, without feeling dense, and getting all the abilities in and putting them in the right spot and making it contextual, while also making it intuitive and flowing. 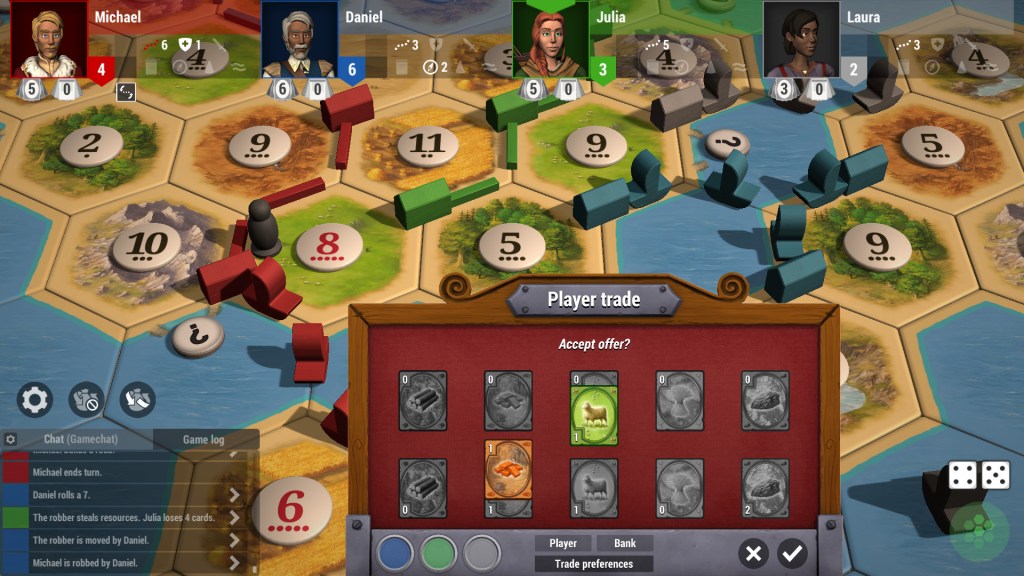 Above: This is what Catan looks like as a digital game on Steam.

Detsaridis: Another thing that we have a cool advantage on here is, having done two games already, two board games, we have a lot of user feedback on, OK, this worked from Magic Table. This worked from Dungeon Chess. Please change this. There are a lot of things that we know—for example, being able to control where some of the interface elements go. I’m left-handed. Some other players are right-handed. Some of the actions that you perform, you’re going to want to do them with the hand you naturally use to move cards around or place objects.

Zatkin: Some players hold their cards to their left side and some players hold them to the right side. Some players put them down. Giving some of that freedom, while keeping people from being dicks. In a 3D area, if I let you hold your cards and put them out over the board, we don’t want you blocking someone else’s view.

GamesBeat: What feedback have you received from people who have visual disabilities, or use their mouths or other interfaces to control board games on the PC and with VR?

Zatkin: We’re starting with some of the obvious things, like addressing color blindness. We’re looking at some of the others, like multiple controllers and input devices and the ability to look and click, all the way up to touch. We’re not requiring people to use a more expansive movement-oriented paradigm when we can also, while running that, simultaneously run gaze and click button ones, which interface a lot better with more disabled folks in our community, and just different body challenges people have. For some things that affect the hardware itself—we’re software developers. We can’t go and affect the physical hardware profiles. We rely more on our platform partners to address some of those issues, which we can then leverage to get more access into the community. But we’ve been designing the whole thing with a lot of that in mind. Wherever possible, we’re making multiple choices, even though it costs us more development time, to address as many of these as we can.

Detsaridis: As long as you have the capacity to indicate a selection, the only other thing you need to be able to do is to move the gaze. That is, on the hardware side, controlled by accelerometers and six degrees of freedom. But to the extent that anyone—we know that VR is often used by disabled persons. That’s kind of a key part of rehab as well. One of our engineers has worked on this in the past. We’re particularly aware of trying to make sure that, so long as you can fulfill the base requirements either through your own body or through additional hardware, being able to select something and move the point of view, then we’ve got you covered.

Zatkin: We’ve thought about it a lot. 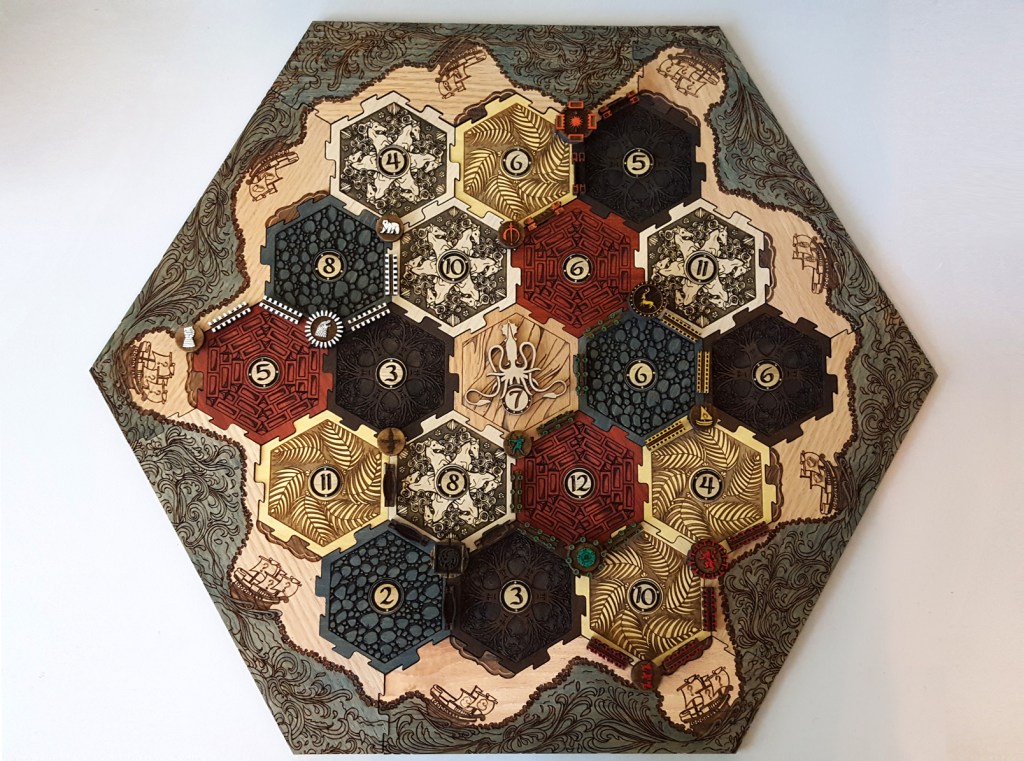 Above: Carlotta4th has created a way to add Game of Thrones to Catan.

GamesBeat: Every board game has a custom market. People make their own things for it. Will there be any sort of modding capabilities?

Detsaridis: You know, that is a really good idea.

Detsaridis: We’ve done it ourselves, of course. In fact we have a couple of skins for the tiles that we’re going to try to launch with, if you like the classic skins or the look from the Xbox 360. But as far as allowing users to do it themselves, that’s pretty cool. We haven’t really thought about it. But we’ll put it in the backlog.

Zatkin: I haven’t seen it in a VR game yet, but that doesn’t mean it couldn’t be done. It’s funny, because we pass those around the office all the time. Look at this cool board someone built for Catan. The latest one was a Game of Thrones one.

Detsaridis: Yeah, which we assume someone saw before making Game of Thrones Catan. …