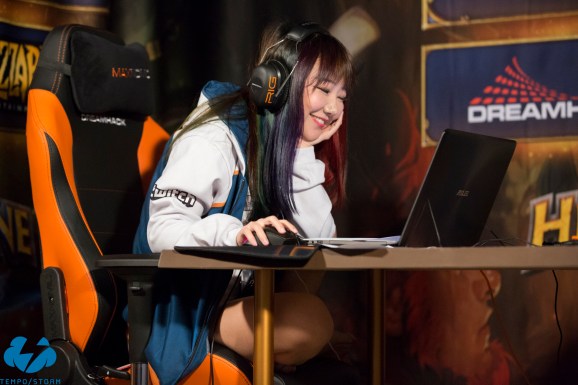 Eliose competes for Tempo Storm during the Hearthstone tournament at DreamHack Atlanta.

The esports industry is one of the fastest growing segments in sports and entertainment, on pace to generate as much as $5 billion in revenue by 2020 — and advertisers obviously want in. One of the primary reasons that esports has such tremendous growth potential? The involvement of women. Brands need to be aware that the industry is seeing more and more women enter not only as spectators, but also as players, infrastructure builders, game designers, and more.

This growth of women in gaming can be seen across multiple areas, including game developers, collegiate players, professional athletes, and mobile competitors. The International Game Developers Association found a significant jump in the number of female game developers between 2009 and 2014, with the amount doubling to 22 percent.

Earlier this year, Stephens College in Columbia, Missouri became the first all-female school to announce a varsity esports program supported by scholarships. More women than ever are moving to the professional level, such as the all-female Counter Strike: Global Offensive Team Dignitas squad. I’ve also directly witnessed the rise of women in esports. Today, over half of the 12 million registered gamers on the Skillz platform are women.

A study this year also found that women lead men in mobile gaming engagement, as they’re more likely to register and spend within mobile games. This makes women the ideal, preferred consumers in what is now the largest digital gaming market in the world. Women also now comprise about a third of the U.S. esports audience, and are projected to account for half of viewer growth over the next 12 months. And according to one study, more women than men self-identify as being involved in esports.

Clearly, data shows that women are a significant demographic in gaming and esports. For these industries to continue to thrive in the future, female participation will be crucial. So, the fact that women have to prove themselves worthy to be part of the gaming world is not only contradictory — it’s a detriment to business.

Yet women are disregarded

As a woman who has been a gamer her entire life, and as the head of engineering at the world’s leading mobile esports provider, one thing about the gaming industry has been an ongoing disappointment to me: the industry’s systematic disregard and discrimination toward the female demographic that has proven essential for its continued growth and success.

Sadly gaming and esports are widely considered “male industries,” a characterization that disenfranchises the women in the field, as well as the millions of female esports fans around the world. Perhaps the most serious consequence of this characterization is that it permits, and sometimes even encourages, the mistreatment of women in gaming. It’s something we’ve seen time and again from online communities, live-stream viewers, and even professional esports athletes.

Unfortunately, examples of this behavior are continuing to emerge. The infamous #GamerGate in 2014 saw anonymous online attackers threaten developer Zoe Quinn and many others with violent and sexist threats. This had a chilling effect on women and other marginalized people across the entire game industry.

Meanwhile, one study last year found that comments on female Twitch channels are characterized by objectification from viewers about the streamer’s physical appearance and relationships, while male Twitch channels mostly see comments about the game being played. Earlier this year, two professional Overwatch athletes solicited female esports fans – some of them underage – for photos and private meetups.

This attitude toward female gamers isn’t just an abstract concept happening to a select few. I have also noticed a difference in how I’m treated by fellow competitors when I’m playing online. A lot of games provide few, if any, female avatars, so sometimes I just use my favorite avatar regardless of how it relates to my gender. Due to this, fellow players usually just assume I’m male, and are surprised if they discover that I’m actually a woman. It just makes me wonder why my gender comes up at all. We’re playing a game: gender shouldn’t affect that.

But it does. Inappropriate behavior, sexually-charged comments, and hostility regarding the perceived inferiority of women’s gaming skills work to push women toward the margins of gaming. However, this marginalization seems rather counterintuitive in an industry that’s increasingly thriving, due in large part to female consumers.

As the VP of Engineering at Skillz, I feel extremely fortunate to be developing a product that offers everyone, regardless of gender, background, or skill level, a chance to compete in mobile esports. However, a broader shift in thinking is needed across the entire industry.

If you’re still not convinced by the data, take it from someone who’s witnessing the democratization of esports and the rise of female gamers firsthand. For the esports industry to reach its true potential, the continued participation of women will be critical. Isn’t it about time for the industry to truly support and encourage women, whose involvement will make or break modern esports?

Miriam Aguirre is the Vice President of Engineering at Skillz, the worldwide leader in mobile eSports, which was recently named the fastest-growing company in America by Inc. Magazine.