Exore: The Rising caught my attention not for being a role-playing game. I get pitched on several a day, so ideas needs to stand out. And Exore’s did with its the factions. My mind went straight to Planescape, the 1990s Dungeons & Dragons setting in which factions played a major role in the how the multiverse worked.

I adored those factions. And while Exore’s low-fantasy RPG isn’t Planescape, the difference choices players might make in a realm where a group of factions pulls the strings intrigues me.

The Tiny Shark Interactive studio is raising money on Kickstarter for Exore. Its world, Eogaan (pronounced ee-oh-gahn), doesn’t have archmages and dragons. Instead, its inhabitants are more mechanically inclined than most fantasy folk, tinkering with their weapons and armor and creating devices to help them get ahead. Your choices affect how you deal with the four factions, and exploration is important to achieving your goals.

I talked to creative lead Vishal Ranga on Exore and Tiny Shark, a predominantly Indian firm with offices in London and India, about how all of this works. This is an edited transcript of our interview. 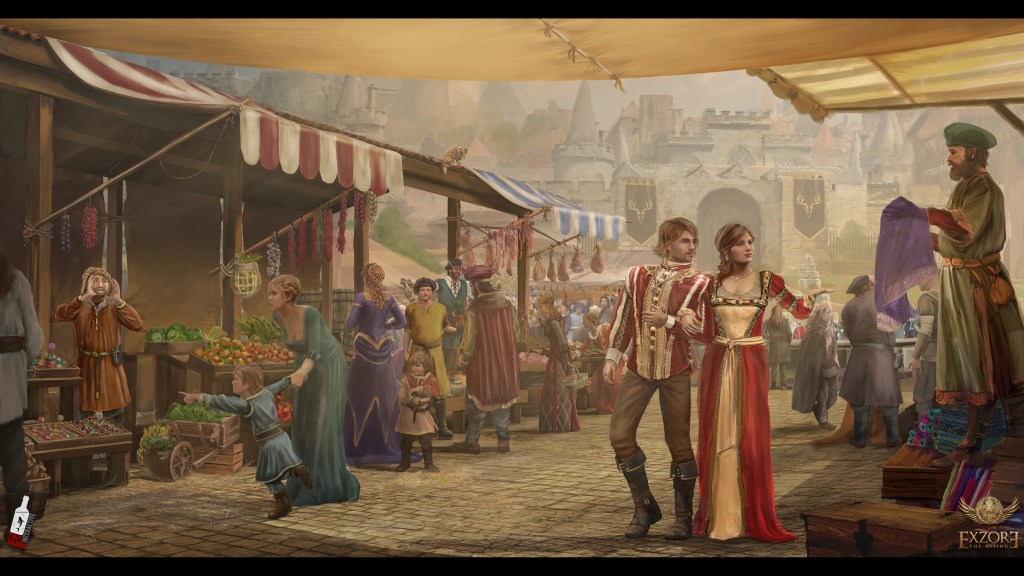 Above: One of Exore’s factions deals with royalty.

GamesBeat: Exore is a medieval RPG, but it’s not high fantasy. Why did you choose that world to tell the story?

Ranga: I’m the creative lead for the game. This is basically my story. Medieval is my kind of fantasy. I’ve done lots of research in the medieval style. We formed a team, and most of the team members are really into medieval stuff. We thought this would be a good setting for an RPG. We wanted to do something exciting, do something really different, so we’d include a kind of medieval tech, some kind of technology in medieval times, just to make the game a little different from others. It’s definitely not steampunk. It’s all mechanical.

GamesBeat: What made for that choice? Was someone on the team particularly interested in metalsmithing and the like, or did you just see that as a way to make your game different?

Ranga: Actually, both did. The main thing was, we wanted to make an RPG that’s not a typical RPG, where you have magic monsters and everything like that. But at the same time, if we make something without any fantasy elements at all, it just becomes a kind of medieval simulator. So just to add some fantasy element, we wanted to introduce this kind of medieval gadget thing, like a medieval Batman.

GamesBeat: Is this your studio’s first game?

Ranga: Yes, this is the first game as a studio, but our team members have been involved in quite a few games before. I’ve been involved in a lot of Ubisoft’s playtesting. I tested on Watch Dogs. I was involved in making The Division. One of the guys worked on preproduction for Watch Dogs 2. I used to work in the UK.

GamesBeat: How large is your team at this point? Is it just the people on the page?

GamesBeat: You called yourself the Dungeon Master on the team page. Was that just a joke, or do you play Dungeons & Dragons?

Ranga: I’m the game designer, so I just called myself the Dungeon Master. We don’t have our own paper RPG game within the team, though. It’s just a fancy way of providing our designations. Just for fun. It still suits what we’re doing, though. I’m the creative lead, so Dungeon Master works. A 3D modeler might be  a Polygon Punisher.

GamesBeat: Is that something you’ve been writing about yourself in the past, or did you make it just for this?

Ranga: We have this faction system. The world is split into four factions. The whole idea of the world getting split into four, and each faction behaving differently with the player—all those things have been in my mind for quite a few years now. Ever since I graduated from university, I’ve been thinking about making a world that’s very reactive to the player. Something that gives the player lots and lots of choices. That’s one of the main things in my design. An RPG should give a lot of choices to the player. The best way the whole team thought of as far as doing justice to that theme of choice is by splitting the world into many factions and making them react to every single thing you so in the game.

GamesBeat: When it comes to those four factions, you have one that represents the royalty, and one that lives in swamps?

GamesBeat: You have the highlanders, but they seem to be not so much hill people as the folks who like to work with metal.

Ranga: Right. You know all the clichés – highlanders are very tough. But we wanted to make something like—they’re very chilled out, but they’re naturally strong, so they make their living from blacksmithing. 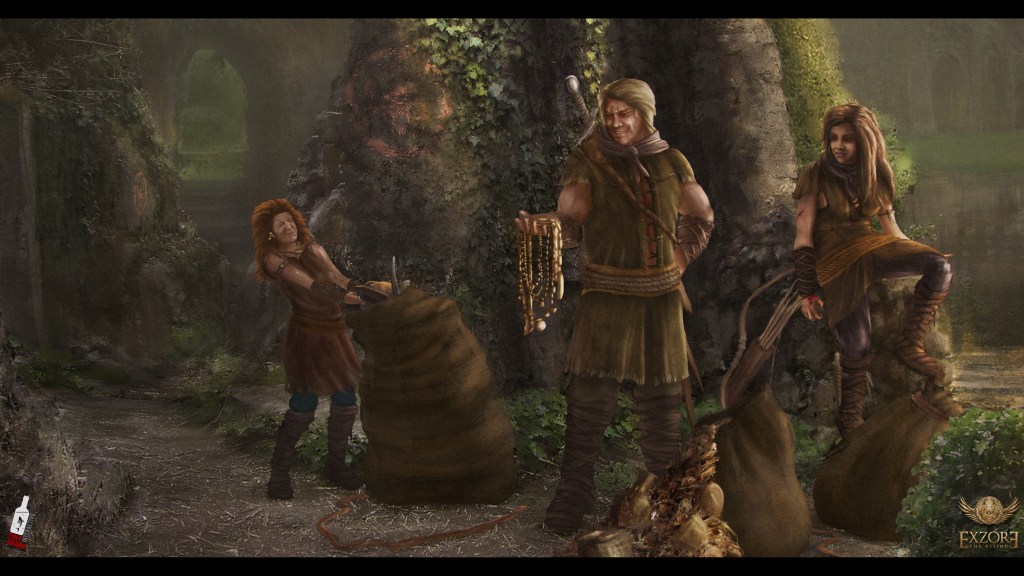 Above: Plunder … or is it thievery?

GamesBeat: And then you have the thieves and bastards.

GamesBeat: It reminds me a little of the faction system you get from second edition Dungeons & Dragons with Planescape, which was built around factions jockeying for the planes. Why just these four factions and their belief systems? Does each one play off each other? Are there ideas you wanted to explore?

Ranga: The way we chose the number of factions was mostly for the design part, to be clear, when it comes to making missions and balancing the game. We have a lore, a backstory for each faction. Each faction is, in some way or the other, connected to the others. Before the game starts, there’s a routine kind of thing, a state of the factions, and then once you start the game and the player begins to interact with the factions, that can change completely. You may not be trying to change things, but everything you do ends up changing the state of the factions. To start, the highlanders and the city people have a truce between them. The city people and the swamp people are pretty—they’re not on such good terms with each other, because the royalists tried to work on these excavations looking for treasure, all these ancient chests and so on. Since they keep going for these many excavations, in the minds of the swamp people that means they don’t mean well. The bandits are basically just outlaws. No one among any of the other three factions likes them. They thrive by savaging and spoiling settlements everywhere.

GamesBeat: The main character was betrayed. Was that at war, or something like that?

Ranga: Yes. I would say it’s during a war, yeah. I shouldn’t—it spoils a few things if I explain this a lot, at the beginning of the game. I can just say that he’s betrayed by one of his own men. It’s technically during a way, while they try to fall back. The person who betrays him is the scout. He trusts the scout and follows him in a trap and he gets betrayed. That’s the opening of the game.

GamesBeat: The main character is trying to regain his honor, but he ends up with the bandits. Are you using underhanded ways to get your honor back, or are you exploring honorable ways of being dastardly?

Ranga: Before the game starts, the main character belongs to the royalist faction. He’s basically a king’s guard, in the first line of defense for the king. The king gets captured, basically. He wants to regain his honor. Since the king is captured, the entire kingdom is taken over by the other side. Now the kingdom belongs to the other king. One of the main storylines follows his journey toward winning back the kingdom for the king, the rightful king.

GamesBeat: Why did you choose Kickstarter over another funding platform?

Ranga: We’re being funded by a private investor as well, but it’s to cover extra costs for contractors, voice actors, packaging, distribution, and other things. We thought that if we used all the money for these things, we’d have to reduce the game’s scale, and we don’t want to do that. We want to make a really polished game, with all that packaging and distribution taken care of. So just to support us in making the game bigger and better, we approached Kickstarter. That too, in a way—first we approached our investor for extra funding. He’s very new to the game industry. He said that if we could raise a certain amount on Kickstarter, it would give him some confidence and actually invest more than we’d originally ask. To secure investment on his side, and to add some additional features and make the game bigger and better in quality, we’re going for Kickstarter.

GamesBeat: How intimidating is it to make an RPG of this scope, given that Tiny Shark hasn’t made a game together before?

Ranga: It’s not that we haven’t made games before. We do take some creative risks. Instead of making a full-on character creation system, we already have a pre-made character. That’s one risk we’re taking. Another thing is, when we designed the crafting system, we could go deeper and deeper and make it more like—we could make it more complex, but we’re making it less complex. By taking these kinds of little creative risks, we plan to finish the game with the experience and the resources we have. 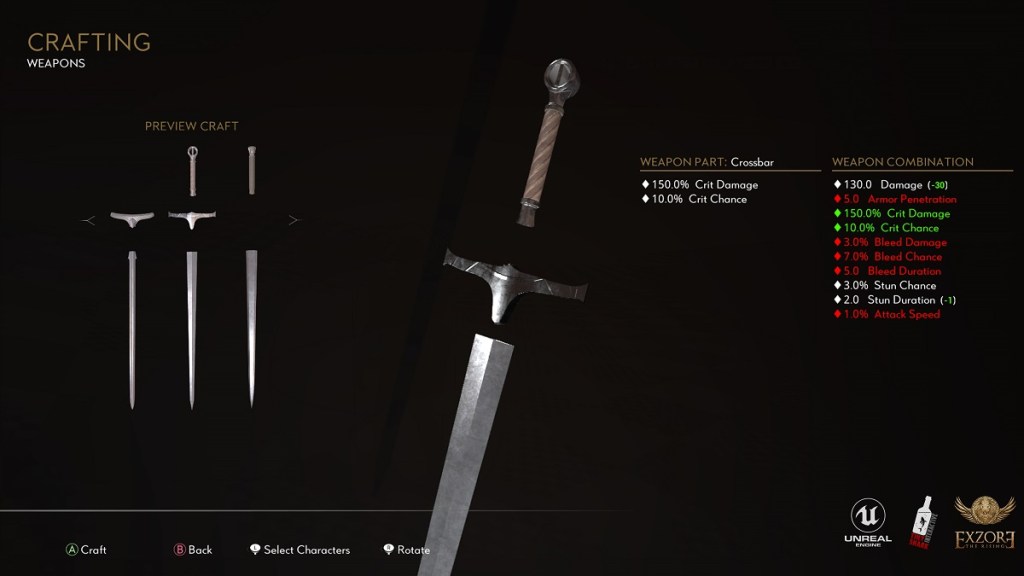 Above: Crafting is crucial to Exore, down to the hilts and guards of your swords.

GamesBeat: When it comes to crafting, you had the example of the sword, changing hilts and changing guards. Is that all about cosmetics, or does it make the weapon a different weapon?

Ranga: It makes the weapon better. If you look at the video, you can see the stats change on the item side. You should be able to see some other changes happen. It definitely affects the stats of the weapon.

GamesBeat: And you can do that with shields and armor as well?

Ranga: We don’t have shields in the game. We just have weapons and armor. As far as weapons we have one-handed swords and two-handed weapons – hammers and axes. You can craft everything, armor or weapons.