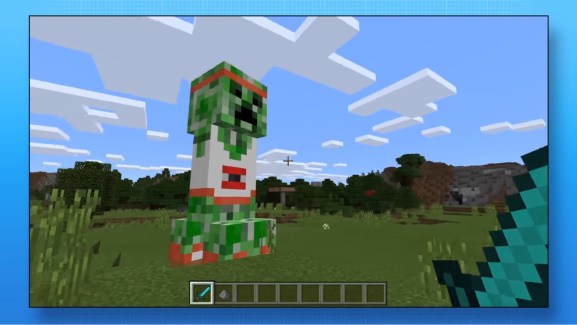 A custom-made creeper add-on in Minecraft.

Since acquiring Minecraft in 2014, Microsoft has worked to turn the beloved brick-building phenomenon into its own platform, and those efforts have led to the company paying out $1 million in earnings to community members who are creating and selling digital items in the Minecraft Marketplace. Microsoft launched the program during this past E3 (the Electronic Entertainment Expo trade and fan event in Los Angeles) in June — although I won’t let anyone forget that I predicted this was coming back at E3 2016.

The Minecraft Marketplace is part of a shift that enables Microsoft to plan the long-term future of what is likely its most popular and important gaming property. While Minecraft continues to sell well on smartphones, consoles, and PC, Microsoft likely doesn’t want to wait for those sales to fizzle so it can make a sequel. Instead, it has found a way to expand the game’s content while also generating an ongoing revenue source from its massive audience of players. This will fund regular updates, which will benefit both players who use and ignore the Marketplace.

It’s still early for the Minecraft Marketplace, but $1 million in payments is impressive only a couple of months after it debuted. That number only includes the money that went to the community creators and not the cut that goes to Microsoft or the 30 percent that goes to Google, Apple, or (eventually) Nintendo for the add-ons bought in Minecraft on Android, iOS, or Switch. Microsoft has not disclosed how much it takes, but it says the “majority” goes to creators.

At the same time, $1 million over a two-month period is less than half of what the more mature community-driven Roblox platform generates. It’s on pace to pay out $30 million to its player creators in 2017, which is closer to $5 million over a similar two-month period. Roblox is a web and mobile game that enables players to create their own modes and minigames, and then the rest of the community can spend money on those activities. The Roblox company then shares revenue with its community developers.

Microsoft and Roblox aren’t the only examples of a publisher bringing its community into a development ecosystem with the promise of revenue sharing. Bethesda has started doing that with mods for Fallout 4 as part of its Bethesda Creation Club program. Valve has done this in the past with its Steam Marketplace, which enables community members to sell hats and other cosmetic items for Team Fortress 2 and Dota 2. Back in January 2015, Valve revealed that it had paid out a total of $57 million to its community, but the program has fallen apart recently as Valve reduced how much money creators would get per item. It’s also difficult to determine how much that number breaks down to over a two-month period for a direct comparison to Microsoft and Mojang’s attempt at something similar.

If Minecraft Marketplace can continue to grow and bring in more customers and creators, it could turn into the engine that ensures the game never has to come to an end. And that is exactly what Microsoft and its biggest fans want.