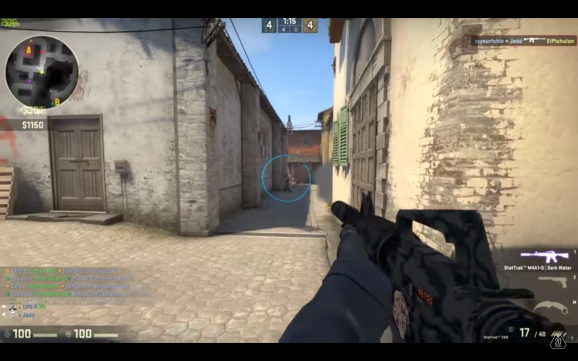 Eleague is adding some high-tech features for its CS:GO Premier 2017 tournament, which kicks off at 7 p.m. Pacific on Friday. Sixteen teams will face off on the battlefield of Valve’s Counter-Strike: Global Offensive, vying for a prize pool of $1 million. Thanks to partnerships with Tobii, Sliver.tv, and Dojo Madness, fans will get more analysis — and will be able to watch in virtual reality.

Many of the new features are directed toward helping viewers get a better understanding of exactly what’s going on in a match.

“A lot of the time in esports today, analysts or fans ask only ‘Who won?’” said Robert Occhialini, Turner Sports’ vice president of esports product and technology, in a conference call. “There isn’t a lot of ‘Why did they win?’ We see this as the beginning of getting into the ‘why’ teams won.”

As part of the analytical efforts, Eleague partnered with Tobii, which specializes in eye-tracking technology. Its sensor is attached to a computer monitor and tracks where the player is looking. Eleague plans to use this to supplement commentary, and viewers will be able to see a graphical overlay that shows where players are directing their attention. Occhialini says that though the tech will be tracking the players’ moves, it’s noninvasive and won’t distract them from their gameplay.

“It’s also important people understand that the player does not see the gaze track live on his or her screen while playing,” said Occhialini in an email. “The gaze-tracking is applied via a third computer and used for video-on-demand applications, including situations where it can offer our commentators more to work with when doing pre- and post-match studio analysis.”

Eleague is also teaming up with Dojo Madness, an esports big data startup. Its Shadow.gg platform is essentially a dashboard that tracks player performance alongside a visualization of the level that includes heat maps. Aside from CS:GO, it’s also available for other popular esports games League of Legends and Dota 2.

To cap it off, it’s partnering with Sliver.tv, which raised $9.8 million last month for its tech that takes 2D PC games and turns them into 360-degree VR streams that can be viewed on the web as well as using a VR headset. It’s currently available for all headsets except for PlayStation VR. Sliver.tv is also partnered with the DreamHack festival and ESL, the largest esports organization.

Turner Broadcasting and talent agency WME/IMG originally formed Eleague purely for CS:GO, but it’s since branched out. It hosted the Overwatch Open in late 2016 and the Street Fighter V Invitational earlier this year, and this fall, it’ll be hosting the Injustice 2 World Championship finals in partnership with Warner Bros. Interactive Entertainment. Occhialini says that right now, they’re only planning to integrate these technologies into Eleague CS:GO Premier.

“We’re always looking to leverage the tech that makes the most sense for our product in the service of our fans,” said Occhialini. “At this time, our focus is on the Eleague CS:GO Premier 2017, but the way we see it, innovation never stops.”