Magic: The Gathering fans have watched as first Hearthstone, then Hex, then Shadowverse, then Eternal, then The Elder Scrolls: Legends, and then Gwent all reinvigorated the digital card game sector, a market that research firm SuperData estimates will hit $1.4 billion this year.

But their wait will soon end as the game that invented the collectible card battler in 1993 prepares to enter the Arena.

Today, Wizards of the Coast revealed Magic: The Gathering — Arena, its answer to Hearthstone and a league of competitors. It’s a free-to-play card games, and interested players can sign up now for its future closed beta test. It runs on the Unity engine, and while Wizards has said it’s debuting on just PC, this game engine choice could herald a jump to mobile platforms in the future. Arena will hit with 279 cards from the Ixalan set and offer Constructed play, with plans for adding more cards and formats, like drafts, and the spectator mode in the future.

Arena is a milestone for Wizards. It’s the first game from its in-house Digital Games Studio, which it announced in January. The publisher of Magic and Dungeons & Dragons, Wizards didn’t release any information on pricing for card packs, prebuilt decks, and such for Arena, though Magic vice president of global brand strategy Elaine Chase did say that they hope to bring new cards to Arena as soon as they can when new sets hit retail for the tabletop game, if not the same day-and-date.

I asked if a set of cards hit on a Thursday, would these appear Friday in Arena, and she said, “Close to that, if not that. We haven’t figured out exact timing. But that’s the goal.”

Of course, this isn’t the first Magic digital card game. Heck, as Magic’s vice president of global brand strategy Elaine Chase noted, the first was Magic Online in 2002. But players never dug it the way folks have jumped into Hearthstone or Shadowverse.

In a way, Magic Online is Wizards’ mulligan.

“What we’re doing with Magic Arena, we’re taking the real gameplay rules of Magic, which is what Magic Online has, but we’ll focus, at least at the start, on our front list play, our current Standard and Draft formats,” Chase said. “We’ll make it in a beautiful interface and quick play style that really matches the way people play games today.”

The plan will be to start with a smaller constructed offering and then expand until you will be able to play all the modes you might find at your friends’ table or local game stores’ Friday Night Magic events.

“One of the beautiful things about Magic is that there are literally hundreds of ways to play. There are all kinds of different formats and house rules and things like that. For Arena, we’ll focus on Standard play and that front list draft experience first,” Chase said. “You asked a bit earlier about the difference between what Magic Arena offers and what Magic Online offers. Magic Online, since it’s been around for so long, offers a huge catalog of cards that goes all the way back to the beginning, and a wider range of formats than what we’ll be focusing on for Magic Arena up front.”

I found Chase’s use of front list here confusing, so I asked what she meant.

“When I say front list draft, it just means that when we go for a wider launch, whenever it’s ready and we’ve baked this thing enough and it’s ready to go, we’ll have all the card sets in that current Standard environment,” Chase said. “We’ll be able to run drafts starting with those sets and sets going forward. One nice thing is that Arena will be on the same kind of release cadence as the tabletop game, so people will be able to integrate their play between what they play in tabletop and what they play in Magic Arena.” 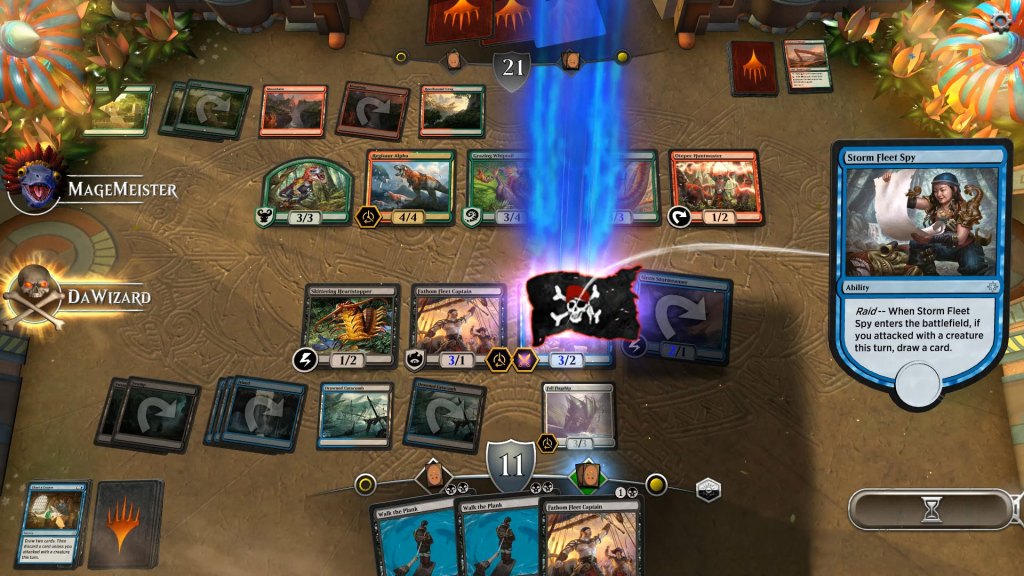 My favorite way to play card games is draft. I would play Hearthstone’s Arena almost daily until the recent “synergies” hit, and I dive into The Elder Scrolls Legends draft mode several times a week. But again, this is something that started with Magic: The Gathering.

Over the years of listening to Garrett Weinzierl and Willie “Dills” Gregory talk about Magic’s Sealed draft mode (where you open packs of cards and then build a deck) on The Angry Chicken podcast, I just had to ask Chase if this would be coming to Arena sometime down the line.

“There’ll be draft and sealed also,” she confirmed.

Hearthstone and other digital card games lack a sealed draft option. Tempo Storm, an esports organization that has a roster of Hearthstone players, does offer a tool to help make sealed draft happen in Blizzard’s game.

I love playing board games such as Talisman and Lords of Waterdeep in the digital realm, and my biggest takeaway is that designing an intuitive user interface must be one of the greatest challenges developers face when bringing products from the tabletop to our PCs and smartphones. Magic’s mana system uses cards called lands, and to activate them, you “tap” them and show they’ve been used on the table by rotating them. Other lands have different effects. For other mechanics, players typically use dice as counters and put them on cards. I asked Chase how hard it is to capture such systems in an easy-to-use-and-understand UI.

“We’re still working through all the elements of what that game scene looks like. Right now, that is our priority. Because you nailed exactly what the issue is. There’s lots of information you need to pack into a small space. You have to make sure it’s readable, that you can see everything, but make sure it’s engaging and fun to watch and play and be there. That’s the area we’re working on right now, a lot,” Chase said.

She first addressed how Wizards’ in-house designers are handling lands.

“We’ve tried a lot of cool innovative things with lands. The issue with Magic is that we have so many special lands that you can’t just have a mana gauge. It’s not just, I have something for blue mana or red mana. I have all kinds of lands that do all kinds of special thing. You need to have more fine control over all aspects of your strategy — lands and everything else included in Magic. That’s honestly one of our biggest challenges,” Chase said. “Between getting the game scene right, making sure it’s quick and intuitive and gives you the information you need, and making sure we have the right game rules engine, which we’ve completely rebuilt, separate from our previous games’ rules engine, to handle all the complex interactions we have. That’s the challenge of bringing a game as strategic and awesome as Magic to life.”