And since Arena is going to be in a digital space, I wondered if this gave the designers come creative space in which to use something other than dice to show counters.

“It frees us up a lot, to be in the digital space,” Chase said. “At the end of the day, once you’re in the digital space, a card no longer has to be exactly rectangular. It can be lots of things. When effects happen, you can change text or power and toughness on cards the way you can’t with real paper cards. With Arena, we’re taking the awesome gameplay of Magic and optimizing that gameplay for a digital delivery system.”

I specified an example from my recent game of Magic with a friend. I had a ramp deck, and I could turn lands into elementals. But there was no card for that. We just put a counter on the lands. But digital could mean an interaction that transforms cards in this manner into something cool and awesome, right?

“It’ll look cool and awesome, yes. [Laughs] One of the things that’s most awesome about being able to do Arena is that the cards aren’t locked into their shape. They’re not locked into what they do. Once you get your hands on the game itself or watch the stream, you’ll see that when creatures attack, when they have effects and things, they actually burst up out of the frame and do things. They start attacking each other,” Chase said. “We’re going away from this idea of it just being a flat, static, 2D kind of experience, into something that’s way more engaging and interactive and really awesome to look at.”

I just had to ask Chase about her favorite card effect. 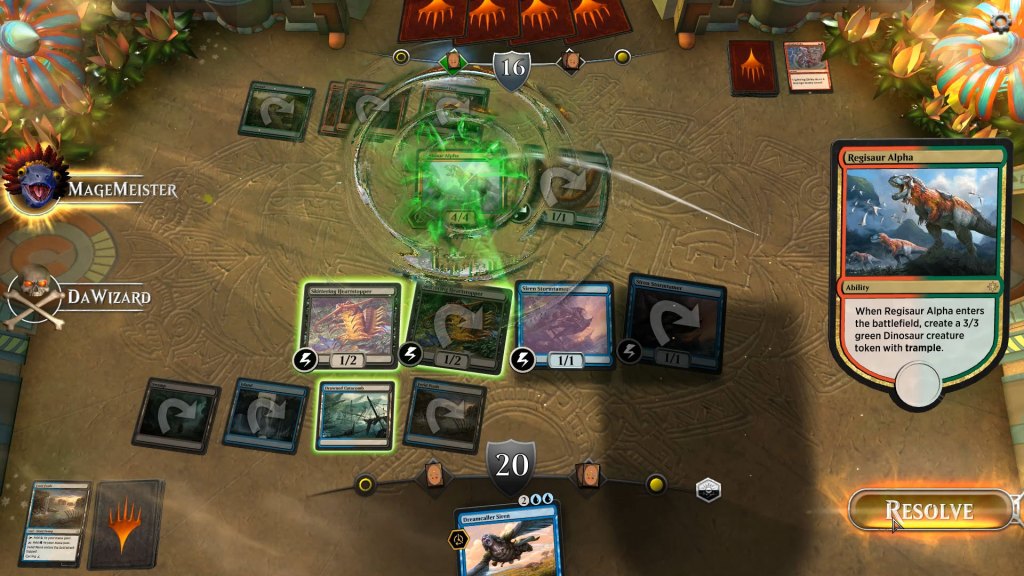 “I’d say probably the favorite card effect is — there’s this huge dinosaur, because our Ixalan set that comes out next — what you’ll see when we first start showing the gameplay is focused on Ixalan cards. Dinosaurs are a huge tribe in Ixalan. There’s a huge dinosaur that pops out of the card and goes ‘Raaaaaaar! It’s really awesome.”

In addition to adapting basic mechanics like lands, Chase noted how to work with other, more esoteric effects, like the Energy system that the recent Kaladesh set introduced.

“Honestly, what we’re looking at that’s tough is — the Kaladesh set had a bunch of different kinds of mechanics that had a different mana system. There was Energy in there. Trying to figure out ways to present not just mana — which, as we talked about earlier, is a thing we need to make sure we get right and present the right way — but then now we’re adding Energy in there and having other aspects together. The beauty of the card game is you just need to print it on the card and players can work it out on the table. Once you start getting those effects that work together, it really compounds the complexity.”

All in a name

The name “Arena” has history with Magic — it’s not just the moniker for draft modes in Hearthstone and Legends. Chase explains.

“Magic actually used ‘Arena’ first way back when in our store program. That was our first store-level program, before Friday Night Magic even existed. That first gathering group we had was the Arena program in stores,” she said.

It meshes with Wizards’ goals as well to make Arena an experience that people enjoy playing and watching.

Streaming is going to be a key component in Wizards’ strategy for Arena. We’ve already seen this with the Arena gameplay that Magic broadcaster Gaby Spartz and Jason “Amaz” Chan (a noted Hearthstone streamer) showed off on Twitch today. Magic already has plenty of experience with streaming thanks to the Magic Pro Tour and its Grand Prix events.

“Today, Magic streaming is really focused on that tabletop competitive side. What’s going to happen once we have Magic Arena in the mix, though, there will be a lot more streaming of people playing day-to-day games,” Chase said. “That’s not really possible with tabletop, unless you’re trying to set up a camera over your table. It’s just not super-convenient. It’s not necessarily engaging to watch, because you can’t see what the cards do. But Magic Arena is really being built with that idea of streaming and spectating built into it.”

Hearthstone grew in part thanks to a dedicated community of streamers on Twitch, and many of these have significant experience with Magic: The Gathering (such as Brian Kibler, a Hall of Famer who now broadcasts many Hearthstone events for Blizzard). If Arena gains traction with this group, it could find itself becoming a serious competitor to Blizzard’s dominance.

After all, Magic has grown alongside the internet itself, Chase points out.

“[Streaming has] always been important to us. When you put our timing in context, Magic really grew up right alongside the internet. It launched in 1993. The first set of newsgroups that were up were people coming in and talking about Magic. We were really — when you think about the technology development, the internet and internet communities, Magic was right there growing up along with that. For us, that community aspect of Magic really is the anchor of everything we offer,” Chase said.

“Yes, we are the best strategy game ever created, I’ll stand by that, but the thing that makes Magic special isn’t just that it’s a great game. It’s that we have this whole community that ranges from the people you hang out with at home, or at your store down the street, or who you play with competitively when you want to try to go down that route. Or the people you talk with online, whether it’s just reading strategy articles or talking on social media with folks. It really is a global community that brings people together, no matter where you are.” 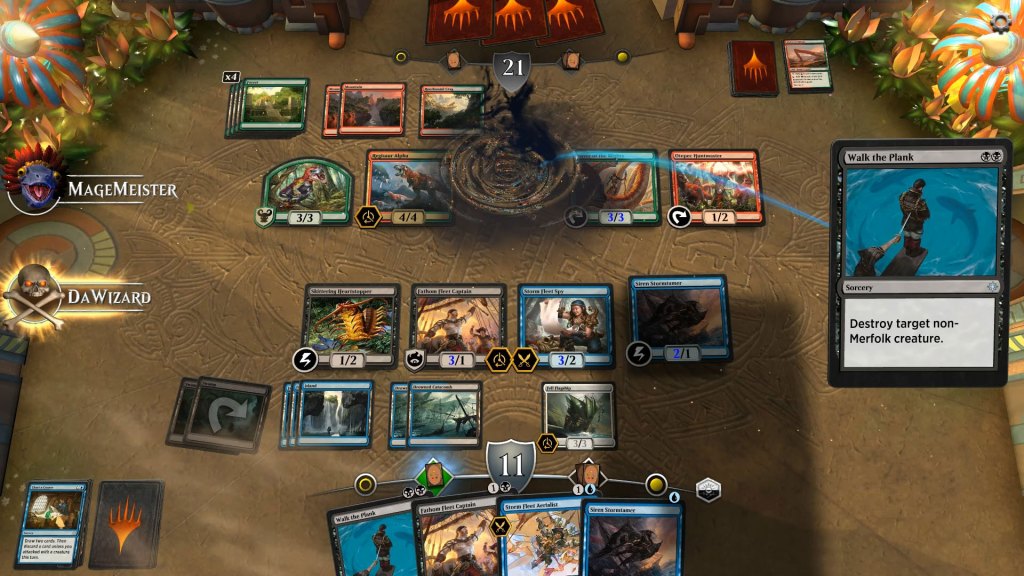 Above: Will Arena cause other card games to “walk the plank”?

Magic debuted in 1993 and changed the gaming world — something that, as a Dungeons & Dragons player, I resented back then. It went online in 2002, but it was never a success. Hearthstone then changed the digital world in 2014, and now is the dominant game in a $1.4 billion market segment.

But why did Wizards of the Coast choose now for Magic: The Gathering to get a proper digital companion?

“Magic is the king of trading card games. We were the first one, and in my mind we’re still by far the best one. Given how popular CCGs have become in the digital space over the last couple of years, we’ve taken a look at what our offering is in that environment, and we’ve said, ‘We can come in and deliver Magic the way it’s meant to be for all of today’s newer CCG gamers. They can come in and have a piece of the best game that’s out there.'”

We’ll see how Hearthstone, The Elder Scrolls: Legends, Shadowverse, and the rest react once Magic: The Gathering — Arena hits its closed beta test. And if I have room for one more card game in my life.

Update, 1:17 p.m.: We changed frontless to front list, as both the writer and their transcriber heard it as frontless.