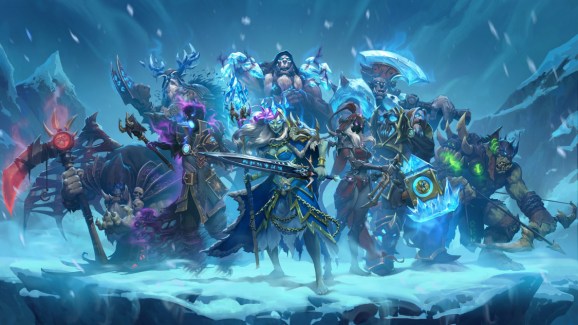 Hearthstone's heroes look a little scarier when they're dead.

Blizzard Entertainment revealed major changes (aka nerfs) to five of Hearthstone’s most popular cards yesterday. Fans were calling for and expecting it to weaken some of Druid’s card. That class has become a powerhouse in Hearthstone since the Knights of the Frozen Throne expansion launched last month. Those nerfs came, but Blizzard surprised by also altering three of the Hearthstone’s oldest, strongest cards.

While much of the community revels in the Druid nerfs, some are meeting the other changes with more skepticism. Take Fiery War Axe, which has been a powerful weapon that’s been a cornerstone of the Warrior class and its identity since Hearthstone launched in 2014. Now, its inclusion in almost every Warrior itself might be a good reason to nerf it. Seeing the same card over and over makes Hearthstone more boring. But meme-making fans have an issue with the way that Blizzard has phrased its reasoning for the Fiery War Axe nerf.

Above: Look at that mana number! It’s different!

“Fiery War Axe has been a powerful Warrior weapon since the launch of Hearthstone,” Blizzard described on its site post detailing the nerfs. “Already great tempo for its cost, Fiery War Axe is well complemented by Pirates and cards that synergize with weapons. Raising its mana cost by 1 will slow down the Warrior’s tempo and lower the overall power level of the card.

But it’s a later part that has drawn ire.

“The other option we considered for Fiery War Axe was to lower its attack to 2, but that change didn’t feel intuitive enough,” Blizzard continued. “Generally, changing the mana cost of a card is less disruptive, because you can always see the mana cost of cards in your hand.”

Some Hearthstone fans are reading this as “people would be confused if we changed a card too much, but the mana number is big and prominent, so they’re more likely to understand it.” This has resulted in some anger and comedy, notably on Reddit.

Other are making fun of the idea that the mana number is somehow easier to see than the health or attack values just because it’s at the top of the card. Just look at this fan’s joke idea for a Tavern Brawl. Others are playing along and pretending to be as dumb as they think Blizzard sees them.

Again, it’s up to debate (and people are doing plenty of it) over if these nerfs are good are not. Popular streamers like Day9 think that the Fiery War Axe change is a good one. Another popular streamer, Kripparrian, is more skeptical. We won’t know for sure until the go live later this month. But Blizzard has used this excuse, of being afraid of confusing players by changing cards, before. And most of the complaining is coming from the reasoning behind the nerf than the actual nerf itself. While the weapon is the focus of most of the memes and criticism, fans are criticizing a couple of the other nerfs — specifically for Hex and Spreading Plague — that just increase the mana cost of the cards by one. They think it’s uncreative and a symptom of Blizzard underestimating its audience.

Blizzard doesn’t think it’s audience is dumb. And despite the joking, most fans also believe this. But there has long been resentment from many of the game’s regular players that more casual fans are holding Hearthstone back. They believe it’s why we don’t see more complicated cards. They also believe that Blizzard’s insistence on keeping the mobile and PC versions of the game at parity prevents them from implementing features, like a built-in deck-tracker.

Hearthstone director Ben Brode provided GamesBeat with a comment (Updated 9:16 a.m.: Ben Brode added a new introduction to his statement after we’ve published our story. We went ahead and added it, the new first paragraph of the quote, in):

I always love to read discussion about Hearthstone, and there’s been a lot of healthy back and forth about the pros and cons of this particular change and the timing of it.

However, some of what I read in the community response seems to be a core misunderstanding that we are nerfing cards because we think players are confused by them (and therefore we think players are stupid). I want to be super-clear — these cards are being nerfed for power level reasons, or because we are curating the set of evergreen cards to help Standard feel fresh and more fun with our yearly standard rotation. The language about certain changes being more disruptive than others was related to why we decided to make one change over another, once we’d already decided to make a change.

I, like a lot of players, have memorized every Hearthstone card. If I show you a picture of Arcanite Reaper, I bet you don’t have to read the card to know that it’s a 5/2 weapon. Art becomes a shortcut to game mechanics.  When we change the underlying game mechanics without changing the art, players who don’t read their cards every time they play a game won’t notice that one of the words on the cards has changed.

I want to make this clear — we don’t think players are too stupid to read their cards. We think players have the capacity to memorize thousands of cards’ text and recognize them by art alone. Nobody double-checks Arcanite Reaper to make sure it’s still a 5/2 weapon each time they cast it. That’s nuts. That’s why it’s less disruptive to change mana cost than Attack, Health, or card text. The card is literally not castable or highlighted green any more, and that makes it obvious that a change has been made to players who have every card memorized.

That’s a fair point. While the most hardcore of Hearthstone fans are checking news sources and will be aware of any nerfs before they happen, a large number of players won’t know about any card changes until they are in the game.

A few Hearthstone fans are calling out the hypocrisy of others on r/hearthstone. As this post notes, Hearthstone players have wanted more frequent nerfs. Fans have criticized Blizzard for being slow to make card changes. And when it does, the studio still comes under criticism.