Mercedes-Benz has announced a new navigation feature is coming to its cars next year, one that’s designed to help drivers find their way to very precise points on the planet that are difficult to find through conventional directions.

While many of the places you’ll ever want to visit are easy to find through a quick keyword or postal-code search on Google Maps, there are plenty of points on Earth that aren’t quite so simple to describe when it comes to giving directions. That cool beach hut you hired for the week? That temporary bivouac you set up while on a hill-walking holiday? A decaying shipwreck? Or what about the many expansive countries that don’t have a reliable addressing system or up-to-date maps with every town, street, and house accounted for?

This is one problem that London-based What3words has been tackling over the past four years, having developed a global addressing system that uses just three words to describe very precise locations.

Available in 14 languages, the company’s platform divides the entire globe into 57 trillion 3 meter x 3 meter squares, assigning each square a random three-word address — these words could represent a buoy in the Atlantic Ocean or a shack in the middle of the Gobi desert. Through its mobile app, you can drag the little pin across the map and you’re given the three word address for a place — for example, “departed.rumbled.awaiting” is the address of this random point in the Gobi desert. 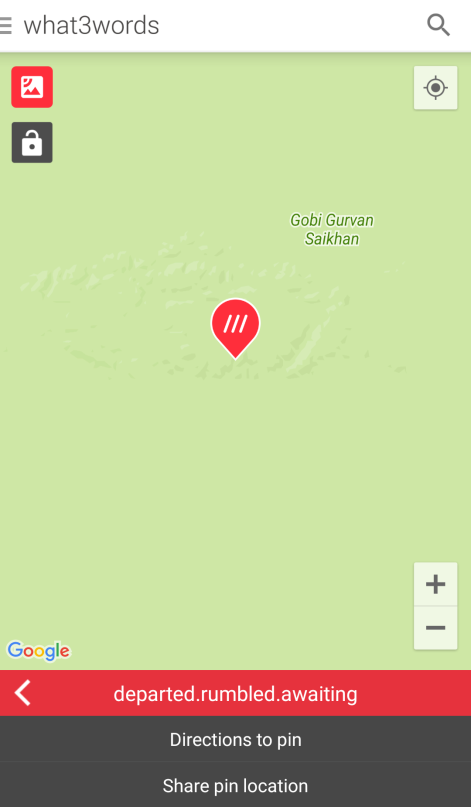 Away from its website and consumer-focused mobile app, What3words has been partnering with a range of businesses to improve their transport and logistics operations. The latest is Daimler-owned Mercedes-Benz, which has inked a deal with What3words to integrate its quirky address system into its next-gen infotainment system that’s due out next year.

While What3words has partnered with other automotive companies in the past, this represents the first time its technology will be integrated into the car itself. And you’ll be able to control it through voice commands too.

Before looking at potential use cases here, it’s perhaps worth outlining how this isn’t designed to work. What3words does assign three words to traditional addresses, points-of-interest, and anywhere that can have GPS coordinates, but that’s not really how the system is best used — after all, why would you go to the trouble of finding three words for the Eiffel Tower or your buddy’s flat in downtown Boston when you can just use traditional search terms in your GPS navigation system?

The idea here, really, is that event organizers, travel guide producers, or anyone with a need to convey a very precise location can do so with What3words, and then a Mercedes-Benz driver simply has to read out the words in their car and they’ll be taken to that fantastic sea view, desert beer festival, or wherever else that’s hard to find.

Three-word addresses, ultimately, are easier to remember than GPS coordinates or descriptive routes.

“Our approach regarding HMI (human-machine interfaces) is entirely focused on giving our customers the best, the easiest, and the most comfortable experience,” explained Sajjad Khan, vice president of digital vehicle and mobility at Daimler. “Three-word addresses are very simple to use, meaning drivers can give their car any precise destination and know they’re navigating to the correct location, every time.”

Another potential way that What3words could be used in consumer-focused automotive navigation systems is to help circumvent confusing or similar-sounding addresses.

“Traditional street addresses just were not built for voice input,” added What3words CEO and cofounder Chris Sheldrick. “15 Ammanford Road and 50 Ammanford Road are hard for a voice system to distinguish between, and many house names and road names aren’t unique. There are 14 different Church Roads in London, and 632 Juarez streets in Mexico City. Street addresses also use thousands of non-dictionary words, the pronunciation of which can be near impossible to guess. The town of Godmanchester is actually pronounced ‘Gumster’.”

What3words has raised more than $13 million in funding since its inception, including a $8.5 million series B round last year that was spearheaded by logistics giant Aramex. That was a major win for What3words, as Aramex adopted What3words within its ecommerce fulfillment operations across Asia, Africa, and the Middle East. Other interesting tie-ups include Mongolia’s national postal delivery service, which adopted What3words in lieu of a consistent addressing system of its own.