PCs aren’t dead yet. Just ask Ron Coughlin, head of HP‘s computer business. The Palo Alto, California company’s PC business has growth at about 11 percent  in revenues, year to date. It has become the No. 1 PC company again, as of a couple of quarters.

Coughlin believes HP is taking share from its Windows PC rivals as well as from Apple. And it is expanding in games with its Omen series of desktops and laptops. The company has also moved into virtual reality. It created its own Windows-based VR headset in an attempt to take VR to a larger market.

HP also teamed up with the Venture Reality Fund to invest money into VR and augmented reality startups. And it created a backpack that allows you to wear a laptop on your back that is connected to a VR headset, so you can move around in a VR space without tripping over the wires. I sat down with Coughlin for a conversation about the growth of games, VR, and the core PC business. 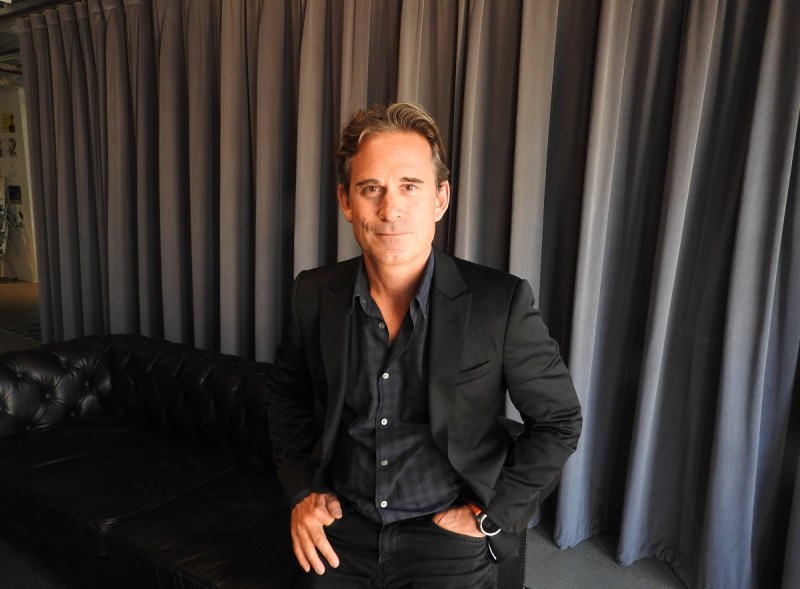 Above: Ron Coughlin is president of HP’s personal systems business.

VentureBeat: What are the trends in your PC business?

Ron Coughlin: We’re coming into this conversation with a lot of momentum. There’s been lots of talk about the PC industry. HP has had three quarters in a row of double-digit growth. Last quarter we grew 12 percent. We’re very proud of that. I don’t think many people would have forecast that.

We took number one two quarters ago in overall PC. We extended that lead this past quarter. Not only are we taking share from Windows competitors, but for the first time in years we’re taking share from Apple in the premium category. We’re also building in gaming. Our gaming business, from a standing start, has reached significant scale.

VB: How did this happen?

Coughlin: A lot of the success we’ve had we attribute to insights. We spent a lot of time mining insights, mining customer needs, and we combine that with our technology and engineering to create products. As we go forward, we ground ourselves in several insights. The first is about one life. A person is a person, whether they walk into their work place or walk in to a Starbucks. They don’t want a brick. They want the same type of devices with the same types of experiences. We’re working hard to create those experiences.

The third is around context. There’s lots of work in context, but one area we’re going to pull away from the pack on is context within the workplace. We’ll know if your hard drive’s about to fail. Rather than IT having to fix it, we’ll come in and fix it before IT has to. We’ll know if you’re running on one-fifth of your battery life and hurting efficiency. We’ll come in and address that.

Last, relevant to that, is services. This market is tipping to services, whether it’s PCs, retail POS, or even VR. The market is shifting to a service model. It happened to our print business 10 years ago. It’s happening to all different types of segments. A great example, I was with the Kering CEO the other day in France. He said, “If I had known I could have taken my PC business to as-a-service, I would have shifted to that model immediately, because I’ve taken the rest of my business there, and it frees up my IT resources.”

Coughlin: As we go forward, we translate that into three buckets of strategy. One is core. That’s where we do things like reinvent the PC — things like 360s, things like detachables, things like gaming. We’re doing a lot of work there. One of the best examples is in the commercial space. We started with innovation based on insights, that people are using their devices a lot for conference calling. Building a device that wasn’t just a great computer, but—rather than having to carry an external puck, let’s build something with a speaker that delivers the full audio you expect for spoken word. Something with keys that are designed to allow you to mute and hang up and answer Skype calls.

The second innovation in the commercial space is around security. This device is the Elitebook 1040, which has a built-in privacy screen, along with security like SureStart and SureClick that deliver a high level of protection as the customer is wandering around the internet.

The third innovation that happened was Spectre, where we focused on building a super high quality premium device with better materials, great touch pad experience, really high battery life. These three separate innovations that we perfected separately then became part of one device we launched at CES, the Elitebook X360. What’s amazing about this device is it does everything the other three do, but it does it in a great integrated package. 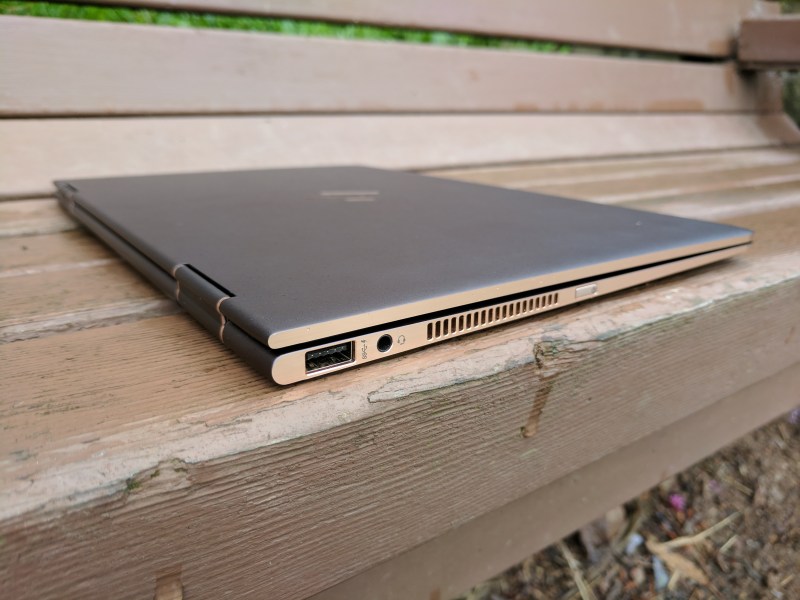 Above: The HP Spectre computer at rest.

We’ve all been on a plane where you look over the row and you’re reading someone’s slides about the wholesale price of beer. Whether we admit it or not, we’ve done it. You see that enough, you think, “I can’t ever travel without a privacy screen.” 3M had a great business in stick-on or slide-on screens. The idea here was to build it in. Here I’m using a machine with a regular screen. I press one button, and if I look straight on, it’s perfect. Any more than 35 degrees off center, I’m private.

The other thing we have is built-in pen support. We know people use PCs to create as well as to consume. We want to up the ante on creation. We’re building pen into almost every one of our devices as a key part of the strategy.

In our future area, we’re focused on two areas. One is 3D scanning. We announced Sprout three years ago. We’re refocusing Sprout on commercial and 3D scanning, primarily. We’re taking that same technology and rolling out and deploying now in 10 stores with a company called Superfeet, scanning feet. You think about what needs to be customized, shoes are a great example. We’re creating custom insoles on our way to custom shoes, printed on HP’s 3D printer, Multijet Fusion. This is our blended reality vision coming to life.

VB: Tells us about VR.

Coughlin: The other big initiative in our future area is VR. We started this journey probably a year and a half ago, announcing a partnership with HTC on the Vive. We provided the compute for their device. We were one of two partners with them. We made the right bet, because they ended up doing pretty well there. We followed that about six months later with an announcement on a VR backpack. When we announced that, focused against consumer gaming, my workstations team—their phones rang off the hook with folks in the theme park industry, auto industry, manufacturing, design. “Can we apply that to our businesses?” We’ve embarked on that and just announced a partnership with Microsoft as well.

What’s interesting in the VR space is how complicated it can be for customers to set up VR. Our strategy initially was to build devices that had the parts, whether it’s the K-series Intel processors or Nvidia GPUs, that were built in. But also we spent a lot of time to make sure that when you set up the machine the first time, it worked well in VR. We saw customers saying that when they plugged in the HTC headset, sometimes the VR experience showed up on the console, and the console showed up in the headset. We’re building software to detect what’s showing up where, which is an important part of making sure the customer has a great experience.