VB: And it’s consumers driving that, as opposed to enterprise?

Coughlin: That’s wholly consumer. Where we are with enterprise is, we’re engaged with probably 20 different commercial customers, whether it’s design or showroom and so on. What’s interesting about this is, we’re not going to be a commodity player here. We met with someone from a luxury carmaker, at our workstation team in Fort Collins. I said, “Are you using VR in your design process?” He said, “Well, I have VR. It’s sitting in the corner.” Why is it sitting in the corner? Because nobody provided him with a solution that takes the hardware, takes the software, customizes it for how he uses it, and ideally provides it with service. That’s the opportunity and the mission we’re on.

What I love about this product is it’s going to drive sockets. It can leverage a lot of the applications that are already in the Windows ecosystem. It brings the price point down. It gets developers excited. It’ll mean more content, drive more sockets, and the whole thing starts to spin up. As this launches for holiday, we’re right at the edge of that big jump. 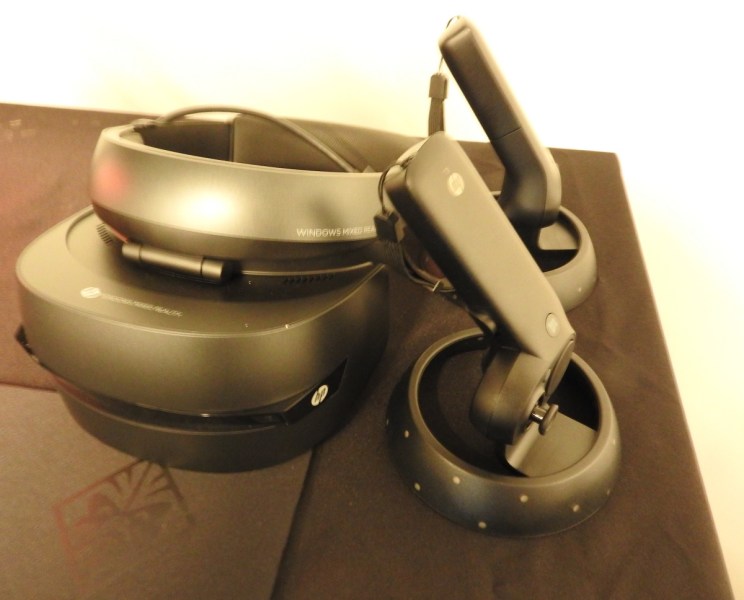 Above: HP’s Windows VR headset with its touch controls.

VB: With the backpacks, are you started to see some of that demand come in from theme parks?

Coughlin: That’s one of the customers that is engaged, yes.

VB: As far as how high-end to aim the headset, where did you guys settle on that as far as what kind of PC is required to drive it?

Coughlin: When you look at the higher framerate, more GPU-intensive solutions, that’s the case where HTC and Oculus are going to drive a super high-end Omen-class PC. If you look at Microsoft’s approach with this headset, they’ve done a lot to make it not put a huge load on the GPU. The ability to make it work on more PCs in the current installed base is a core part of that strategy.

You’ll see different kinds of applications being developed. The ones that were initially more high-performance, you’ll see in the classic Windows with HTC. The applications that are less compute-intensive, those things will lean more toward the Microsoft solution.

VB: Is there a different description for the gaming consumer that trails behind the highest-end hardcore? I think of the hardcore gamers as the ones that are going to build their own PCs no matter what.

Coughlin: Let’s take Christmas as a microcosm. You’ll have a bunch of folks who buy VR as an experience for their kids. I have VR in my basement. I’ve probably had 50 kids come through my basement. The favorite one is doing the roller coaster. It’s hilarious, because people are just sitting in your basement and they’re frightened. You’re going to have that passive experience. Then you’re going to have, as content comes in, the harder-core gamers taking advantage of that. For those gamers, they’ll need more compute power.

There’s a slide we use a lot to talk about gaming. It says there are three primary sub-segments in gaming: mainstream, performance, and enthusiasts. What’s interesting is you look at the mix of OEM versus DIY. On some level, when you see the DIY number go up, especially in performance and enthusiast, that’s where we see the opportunity. You shouldn’t have to know how to build a PC to be an enthusiast gamer. We want to democratize that space. You can buy a PC from HP and get the benefits that made someone else build their own in a PC that’s tested and built and backed by a warranty. When we sell a PC with a K-series processor and you overclock it, not a problem. It’s under our warranty.

VB: I suppose you didn’t want to have people carry a huge weight on their backs, but what did you figure out as far as what they could handle with the backpack?

Coughlin: That’s super interesting. That’s where the human factors team is spending a lot of time. Not just on the weight of the device itself, but where the heat comes out. That was a very big deal. Where the straps fell mattered a lot. We moved the batteries around a lot. The design is clearly different from what you saw in the concept a year ago. There’s a gap right here so air can flow between you and the computer. You’re not feeling the heat right against your back. The air needs to flow out away from you, especially when the thing’s running at full performance. 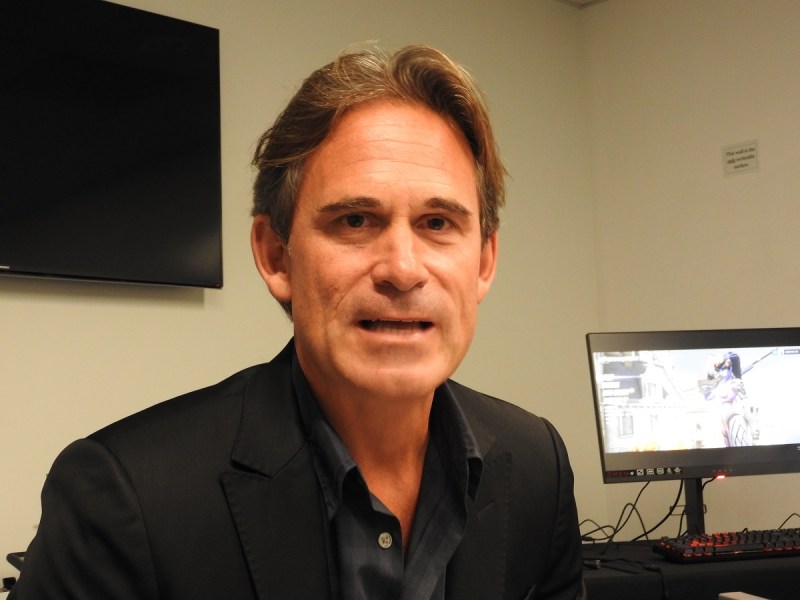 Above: Ron Coughlin runs HP’s PC businesss, which is growing in 2017.

VB: Is there a cover for this? I wonder if someone could come up behind me and grab it. Is that for heating reasons?

Coughlin: It clips in right here. You have to pull these tabs to get it off. The reason that wouldn’t work, though, is this thing is running at super high performance. These vents bring cool air in from the back and shoot the hot air out the sides. If you covered that, or put that in a real backpack, you’d have an oven in the backpack. The machine would automatically clock itself down. If you want the full performance, you have to keep it cool.

VB: VR is hard to figure out right now. The VCs are putting money into esports startups. Those are happening almost every week or two. That’s what was happening with VR a year ago. There seems to be a shift in attitude — “It’s slowed down, it’s not taking off as fast, so we’d better stop piling money into VR startups.” There seems to be this worry that a lot of the VR startups are going fail right now, and when you start seeing them fail, people draw a conclusion about the state of the market. But if there are 500 startups and 50 survive, that’s normal. I don’t think it’s going the way of 3D glasses. It might be another generation of hardware away.

Coughlin: I think it’s been focused on consumer so far, when the sweet spot is actually — you think about Google Glass. The theory was everyone would want this thing, and that’s not going to happen. But there are two sweet spots. There’s a gaming sweet spot, because immersion in gaming is better for a sub-segment of that, and there is a sweet spot in commercial markets.

Let’s take a company in Atlanta that does military training. I happen to live just south of Camp Pendleton, the Marine Corps base. You see these cement structures. How many cement structures can they build, and how many Marines can they get near there? But in Atlanta you’ll go there and see a warehouse four times the size of this and folks will seem to be walking through a big empty space. What they’re seeing, though, is they’re in the desert. There are Humvees around them and helicopters flying over them. They’re in a real environment.

Say you’re a Frito-Lay salesperson. How many Safeways are going to let you reset their shelves? But that business lives or dies on how that shelf is set. If I can do a virtual shelf set with VR, I’m able to train, and keep my sales force trained, every day. That’s where the magic is going to be on this.

One indicator to look at is, how many gaming physics engines have been bought by commercial VR companies? They’re making those acquisitions because they need that tech to build those experiences. In the gaming space, Unity and Unreal are becoming incredibly powerful and highly valued companies because they’re used by game developers to make the physics work in VR. They’re making a lot of investment in the VR part of their engines. 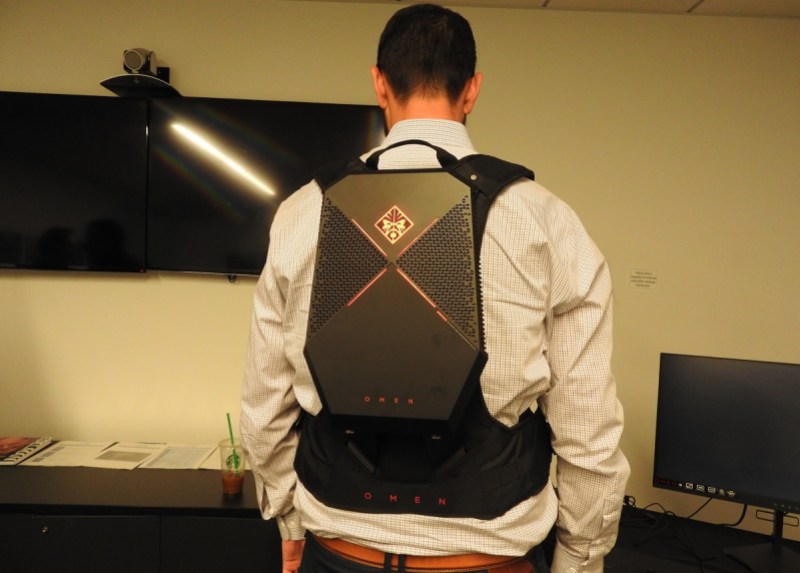 Above: A computer in a backpack. That’s the new HP.

VB: Is there a year you think we can call the year of VR, then, where the adoption curve gets much better?

Coughlin: Right now they’re saying it’s roughly a $7 billion market, and the prediction it goes over $20 billion roughly around 2020. I’d call 2020, roughly, where we would think it starts hitting some scale.

VB: So it makes sense to prepare now.

Coughlin: That’s what we’re doing. I have the world’s best, arguably, compute teams in my workstation team in Fort Collins. They’re working with 20 customers on how we create VR experiences for the vertical needs. Whether that’s moviemakers, theme parks, and so on, the fruit of that labor — those development cycles tend to be 18-24 months in that business. Consumer PC is probably six months to a year. The heavy-duty stuff, vertical orientation, tends to be 18-24. You think about that, the fruit of all that labor will start coming in around 2020.

PC grew 12 percent. We retook number one. But at its foundation is innovation coming back. You talked about labs. We have such a legacy of innovation at our company, and it’s innovation driving the success we’re having. Whether it’s innovation like 360 service, which is business model innovation, or VR, which is long term, we’re reinventing this company and it’s driving results. It’s an exciting place to be.