Over the summer, the video game industry may lose out a bit to theme parks and museums, movies, and device-free summer camps, but video games still captured 6 percent amount of dollars spent by 13-to-16-year-olds, the teen demographic discussed here. This figure is the games themselves, and excludes spending for platforms such as Twitch, where 10 million daily active users spend nearly two hours a day watching video game play.

That teens are spending money on video games is perhaps no surprise. We track this data at my company, Current, to know how much teens are spending, and where those dollars are going. Current makes a debit card and companion app for teens (and their parents). The app, available on iOS and Android, allows teens and parents to automate allowance and track spending. The data on summer spending on video games is aggregated from a pool of several thousand teen Current customers. 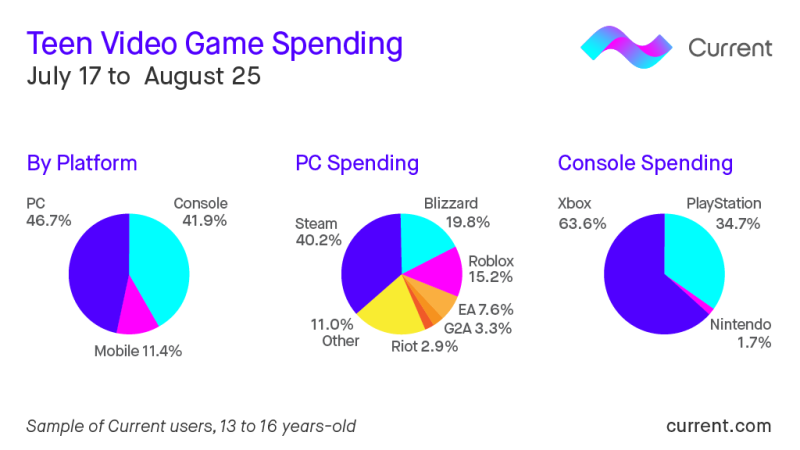 Above: Summer video game spending by teens, per Current

PC led console in share of spend, especially among girls

PC gaming accounted for 46.7 percent of teen spending on video games, console spending 41.9 percent, and mobile 11.4 percent. That ratio of market share by platform among teens is in contrast with estimates for the total gaming population which show share closer to 50 percent for mobile, 40 percent PC, and 10 percent console.

The big swing in mobile game spending from the general population to teenagers may be an eye-opener for adults who see kids on their phones all day long. Whatever the combination of video, music, Snapchat, Instagram, Kik, ooVoo and other smartphone activity, the percentage of teen spending on mobile gaming over the summer was a fraction of what was spent by adults. While the U.S. population may migrate to mobile gaming as they get older, judging from the content on the screens of the average commuter, teens are still spending predominantly on PC and console gaming.

There are many reasons PC gaming continues to outpace console gaming, each one worth its own analysis. One statistic that stands out among Current customers is the gender split. Girls account for 30 percent of PC spending and only 8 percent console spending.

Steam accounted for more than one-third of spending on PC gaming. The average transaction on Steam was $8.78, suggesting that many of the purchases were games on sale, add-ons and in-game items. Blizzard appeared second on our list, capturing 17.8 percent of teen spending. While the average Blizzard transaction was $12.38, 40 percent of transactions were for $1.99, suggesting summer gaming involved quite a few Hearthstone arena runs and Overwatch loot crates.

Minecraft has long been considered a gateway to PC gaming, but among Current customers if looks like Roblox may be the gateway to spending money on PC gaming. Roblox captured 13.7 percent of teen spending on PC games this summer, more than publishing giants Electronic Arts and Riot combined. Of course, some spend on EA and other publishers is going to be hidden in our Steam numbers, but not in volumes that would threaten Roblox spot in the top five.

Games marketplace G2A captured 3 percent of spending over the summer. While that represents only one-tenth of what is spent on Steam, G2As performance is something we plan to keep an eye on.

Purchases for Microsoft Xbox dominated console spending, with 63.6 percent of spending compared to 34.7 percent for Sony PlayStation, and 1.7 percent for Nintendo. The average transaction on the PlayStation was 43 percent higher at $15.97 compared to $11.19 on the Xbox. As is typical, few major games are launched over the summer. EA’s Madden 18 started off the fall season of new game releases on August 25, but most major titles will be dropping over the next four months. New offerings in franchises including PES, FIFA, Call of Duty, Battlefront, Forza, Grand Turismo, Need for Speed, Assassin’s Creed, Destiny and Lego will likely increase the total spend on console, and may impact the average transaction when compared to the Summer period. Even Nintendo should get a boost with new Super Mario and Pokémon releases for the Switch.

Perhaps heartening to parents, over the summer teens spent 10 percent of their money on entertainment that took them out of the house — including parks, museums, movie theaters, and retail recreation like laser tag and trampoline parks. With the summer behind us, and a slate of game launches on the horizon, we would not be surprised to see those numbers dip and video game spending rise once again.

Stuart Sopp is the founder and CEO of Current, a New York-based financial technology start-up.