Sledgehammer Games and Activision revealed a story trailer for Call of Duty: WWII, the next installment in the military shooter series that takes players back to World War II. The story reveals the quest that drives the particular squad of the U.S. Army’s 1st Infantry Division during the Second World War.

This story is an important part of Call of Duty, as it helps determine whether or not fans will keep coming back every year to play the title. Sledgehammer founders Michael Condrey and Glen Schofield said at our recent GamesBeat Summit 2017 event that they want to make this Call of Duty memorable with a deep story that gives players a sense of gravity and drama of the Second World War. If the story is compelling, it could drive sales and keep Call of Duty hot during the holiday season.

Call of Duty: WWII debuts on November 3 on the PlayStation 4, Xbox one, and Microsoft Windows. In the single-player campaign revealed today, you’ll play as soldiers in a squad in the U.S. Army’s 1st Infantry Division, known as The Big Red One or The Fighting First. The division saw a lot of action throughout the war, starting in North Africa in Tunisia. It moved on to Sicily, Normandy, Aachen, and the Ardennes, the site of the Battle of the Bulge. 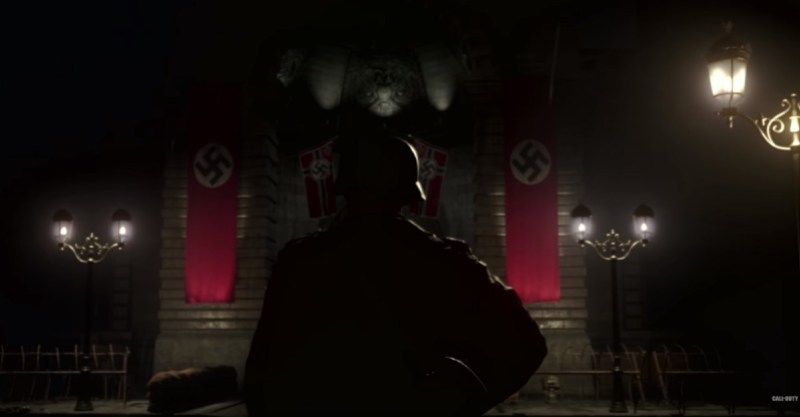 Above: A scene from Call of Duty: WWII.

The trailer starts with an American soldier named Daniels chasing a German soldier and taking him captive. He has to decide if he will kill the prisoner, as another American urges him not to do so. In the larger war, the American army prepares to break out of Normandy and conquer the rest of France after the D-Day invasion. The soldiers discover the horrors of war, “where nothing prepared us for this.”

The trailer cuts to a bunch of captive American soldiers, with a Nazi officer picking out the Jews among them and putting them on trains, apparently for concentration camps. Then the trailer shows American soldiers arguing among themselves about how to get their comrades back, either by going rogue and going after their men or following orders. It looks like the story will show the player the conflict between following orders in order to win the war, or pursuing personal rescue missions to bring back their captured friends. There’s a lot of action in the trailer, but not as many answers as we would like, of course.

Among the scenes is a soldier approaching a Nazi with big swastika flags. That’s notable because there is a lot of debate about whether the game should display hate symbols or stay true to history. It’s all part of a greater gravity that San Mateo, California-based Sledgehammer, is trying to bring back to Call of Duty. Last year’s Call of Duty: Infinite Warfare also made a big investment in story, with a long single-player campaign about comradeship and sacrifice. But sales of Infinite Warfare trailed behind those of past versions, and Activision acknowledged that it stayed in the science fiction realm too long.

Condrey and Schofield at Sledgehammer told me in an earlier interview that Call of Duty: WWII is an attempt to take the series back to “boots on the ground” combat, and to bring a serious historical and dramatic focus back.