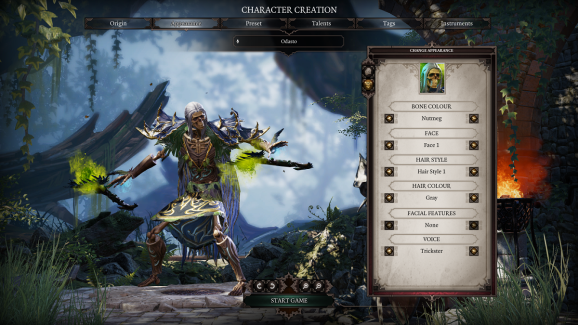 That's a handsome skeleton. You can play undead in Divinity: Original Sin 2.

We’ve seen Bluehole Studio crow about its number of people playing 2017’s biggest gaming phenomenon, PlayerUnknown’s Battlegrounds, on Steam. But over the weekend, Divinity: Original Sin 2 made some unexpected noise when it comes to how many people are playing it on Valve’s PC platform.

Larian Studios confirmed to GamesBeat today that when its new release, Divinity: Original Sin 2, hit 85,493 concurrent players Sunday on Steam, it set what it claims is a new record for any traditional role-playing game on the platform. GamesBeat has asked Valve to confirm if this is correct, and the company says it’s looking into this. A Larian spokesperson also confirmed that this number is higher than the original, Divinity: Original Sin, ever reached on Steam.

Valve says it can’t confirm concurrent number. And in a tweet, Larian said the source for this record was PCGamesN, a media site.

To be accurate – the source of that is here: https://t.co/GsaqXQ1PpO

Divinity: Original Sin 2 released September 14 for PC, and according to Larian, it has racked up over 500,000 sales. But this doesn’t mean 500,000 since Thursday. This includes the copies from Kickstarter backers (it had 42,713, but this doesn’t mean that every one of those got a copy), those who bought it since its September 2016 Steam Early Access launch (Valve’s program for people to buy games before they debut so that studios can make money and add player feedback during development), and buyers after release.

Divinity: Original Sin 2 is a turn-based top-down role-playing game. You build a party of characters, starting off as prisoners shackled with magic-inhibiting collars, as you seek (early on, anyway, as I’m only 15 hours in) a way off an island full of your captors, monsters, and other nasty surprises. Like Original Sin, you can use elements and other substances to your advantage — cast electric spells at those standing in water and they’ll suffer a penalty for being shocked. If you use fire arrows or grenades on a poison cloud, you can create an explosion as well turning foes into humanoid torches.

Disclosure: GamesBeat once interviewed a writer of Divinity: Original Sin 2 for an editorial position. Our coverage remains objective.

Update, 3:59 p.m. Pacific: Included response from Valve and a tweet from Larian.