I’ve been a fan of the Marvel vs. Capcom series since my Dreamcast days. You can always find more technical or methodical fighting games, but Marvel vs. Capcom is a display of dazzling chaos. Multiple characters take up the screen at any time, and 100-hit combos are part of the package. It also helps that I’m a fan of both brands. I also count crossovers as one of my guilty pleasures (I probably watched The Jetsons Meet the Flintstones a few too many times as a kid).

Marvel vs. Capcom: Infinite, which comes out on September 18 for PlayStation 4, Xbox One, and PC, is the new entry in the series. I got to play the PlayStation 4 version (on my PlayStation 4 Pro) for my review. If you’ve been listening to the fighting game community (or even the larger gaming community), you’ve probably noticed some skepticism around this new installment. The character models look a bit janky and lifeless, and Capcom is focusing on heroes and villains from Disney’s Marvel Cinematic Universe. This means no Wolverine, Deadpool, and a bunch of other iconic heroes.

I shared those concerns. But Infinite’s corny-but-fun campaign mode and solid fighting action try to make up for those shortcomings. 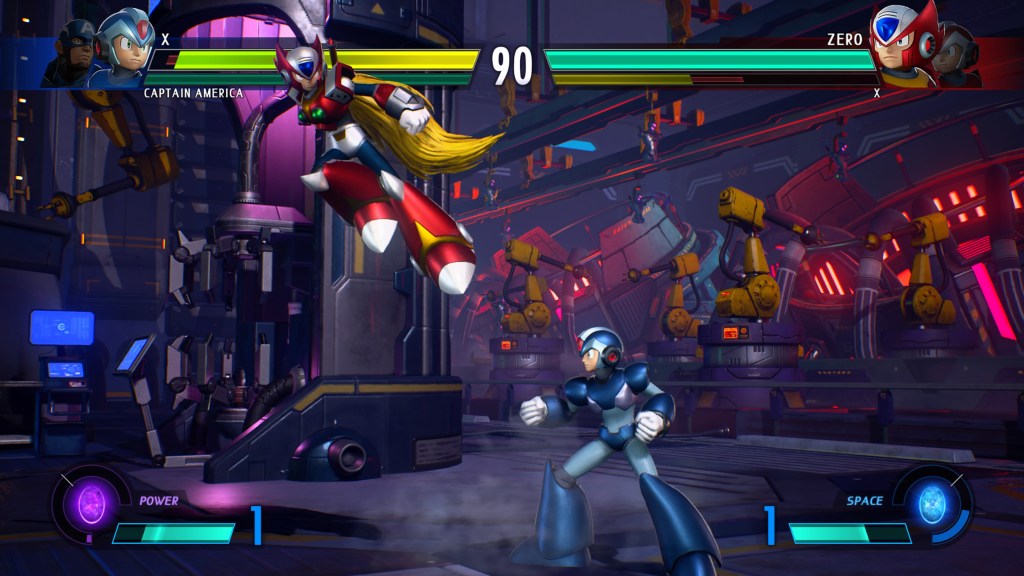 Above: You can tell I have to stand still to push the Capture button.

Marvel vs. Capcom has always stood out with its quick action. Infinite slows things down just a bit. You have two characters on your team instead of three for the first time since the original Marvel vs. Capcom. You also can’t call in allies to deliver assist attacks.

But the fighting is still fast. If you want to win, you need to string together large combos that can go all over the place — the air, the ground — and even extend as you swap in a new character. Pulling off a huge combo still feels great.

The action is also a bit more friendly to newcomers. Every character can pull off a basic combo by continually pushing the light punch button. It’s not as easy as it sounds, since you have to learn to mix in new moves or cancel the combo into super attacks if you want to optimize your damage. But it does mean that it’s easier for even a novice player to punish you if you miss an attack or aren’t blocking properly.

The mechanics are mostly similar to past Marvel vs. Capcom games, but the Infinity Stones stand out as the most significant addition. These are the same gems that you’ve been watching Thor and Iron Man fret over on the big screen for the past decade. You can choose from six of them, and each one represents a different kind of power.

Before a fight, you pick your team’s Infinity Stone, and you can activate its ability with the press of a button. The Power Stone, for example, knocks enemies back. The Time Stone will teleport you forward a short distance. Using these abilities also helps charge up a new meter. When it’s at least half full, you can activate an Infinity Surge. You’ll then have some special benefits until that meter depletes. The Space Stone will trap the enemy player in a transparent cube, while the Mind Stone will help you quickly refill your Super meter. 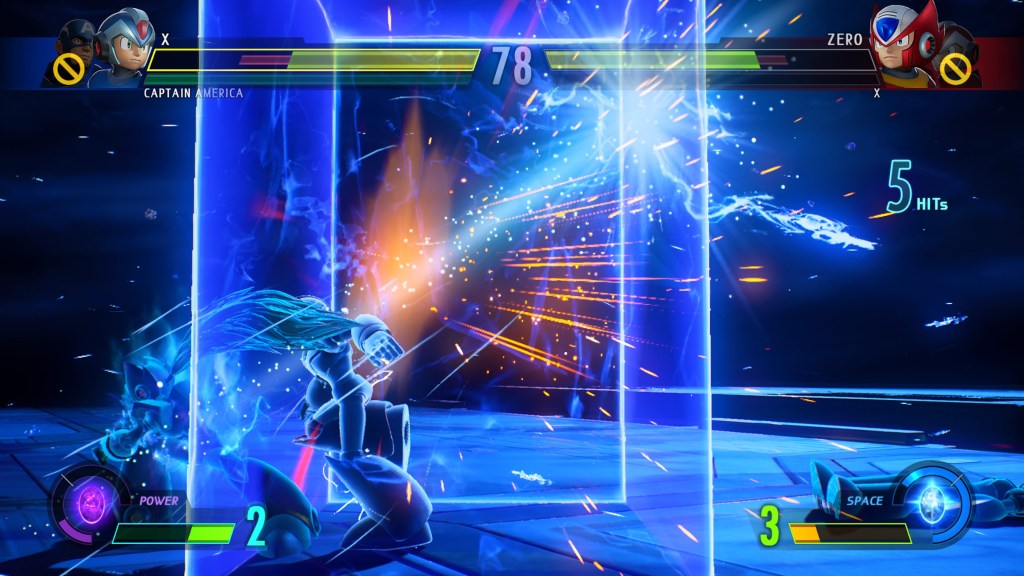 Above: Stuck in the Space Stone place.

The addition of a single-player campaign is my favorite thing in Infinite. Before now, the games never bothered to justify why these two universes were suddenly together. After all, the whole series started because Capcom could easily bring in sprites from a bunch of different games (including Street Fighter Alpha and its 2D X-Men fighter).

But Infinite’s story mode actually gives us some plot. It’s ridiculous. It’s corny. It doesn’t make a lot of sense. But it’s fun. It’s nice to see these characters interact with each other in ways outside of fighting. I got a few geeky chills seeing Mega Man X and Captain America standing side-by-side. Dead Rising’s Frank West and Spider-Man get to share a humorous moment. Arthur from Ghosts & Goblins and Thor have more chemistry than they have any right to.

The story revolves around Sigma (the bad guy from Mega Man X) and Ultron (one of The Avenger’s chief villains) teaming up and combining the Marvel and Capcom universes. And they literally combine them. You’re not just fighting in Asgard, you’re fighting in an Asgard that’s been combined with the opening highway level from Mega Man X. These crossover stages are just as novel as seeing Hulk smash Ryu.

The campaign is also a great way to become familiar with the game’s mechanics and most of its roster. After spending the four hours or so it’ll take to beat it, you’ll have a decent idea of what fighters you like. 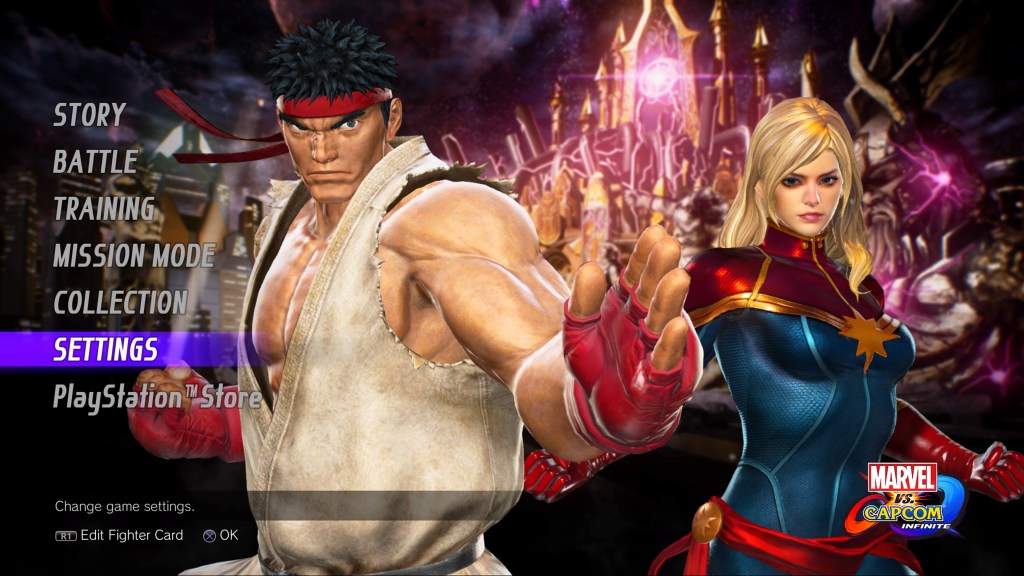 Above: Not much going on here.

First, I want to say that Marvel vs. Capcom: Infinite is not an ugly game. But it’s not especially pretty. It doesn’t do anything to stand out visually, but it looks fine. The character models that look stiff and dead in the eyes when you’re staring at screenshots or promotional stills look much better in action, especially since the fighting always ran at a smooth 60 fps for me. But it is a safe, even boring art direction for a game with such a colorful and wacky concept.

The presentation problems go beyond the art, though. The menus are boring. Just look at the main menu above. It’s hard to imagine how it could be visually less interesting.

And while I enjoyed the campaign, it’s hard to not compare it with the slick Injustice 2‘s story mode, which featured incredible facial animations and seamless transitions from cutscenes to fights. An onslaught of loading screens make the pacing in Infinite much less eloquent. If Injustice 2 feels like a movie, Marvel vs. Capcom: Infinite feels like a cheap Saturday morning cartoon show. Not that cheap Saturday morning cartoon shows are necessarily bad (I certainly watched plenty of them). 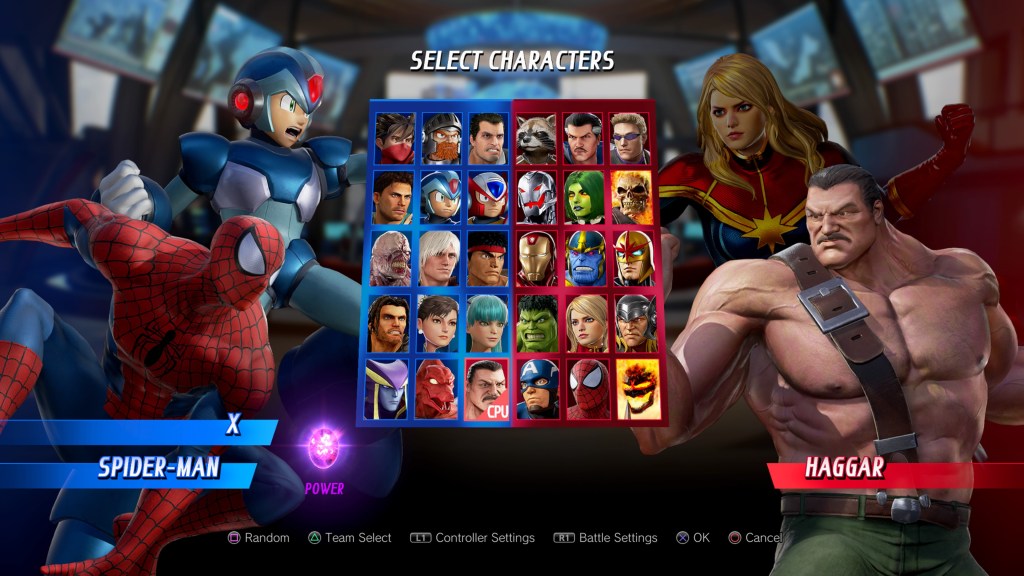 Above: Not a huge roster.

The smaller character selection means that some notable fighters are sitting this game out, and you can really feel their absence. It sucks to not be able to play as Wolverine, Doctor Doom, or Deadpool, especially when you know movie politics are likely the reason why.

But the roster is also missing a lot of great Capcom characters from past games. You won’t find Amaterasu from Okami or Viewtiful Joe here. And I’d like to raise a loud objection over the lack of any Ace Attorney characters.

To be fair, the brand new fighters in Infinite are pretty cool. It’s nice to see Captain Marvel and Mega Man X finally make it in one of these games. But Infinite is only launching with five characters that are new to the series. Another six are coming as downloadable content, which stings when the roster size is already so comparably small to past entries in the series. And you’ll have to spend real money to get them. Infinite doesn’t have any in-game currency. 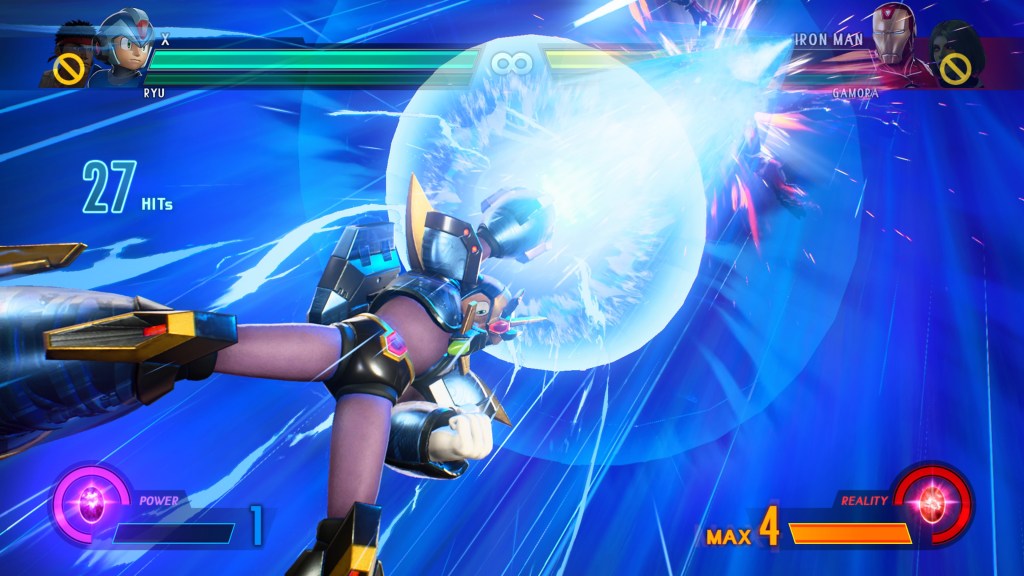 Above: The game can still look cool.

I know a lot of people are worried about Marvel vs. Capcom: Infinite. Well, a lot of your fears are justified. The roster is lacking. The game doesn’t look great (it certainly can’t compete with Injustice 2 in the presentation department).

But Infinite is still a lot of fun. It’ll take fighting game experts with more proficiency than me to figure out if it has any life in the tournament scene, but I expect its fast-paced action and new Infinity Stone mechanic will attract some pros. And if you aren’t planning on winning any major tournaments soon and just want to see Rocket Racoon and Dante from Devil May Cry share jokes and guns, then you’ll find plenty of entertainment in the campaign.

It’s not as big and beautiful as I want it to be, but Marvel vs. Capcom: Infinite still has plenty to offer.

Marvel vs. Capcom: Infinite comes out for PlayStation 4, Xbox One, and PC on September 19. The publisher provided us with code for this review.