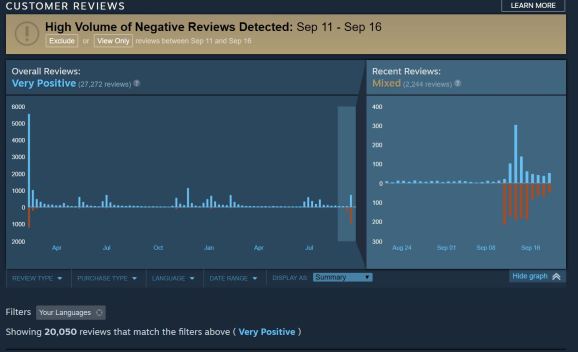 The customer review is a relatively young form of criticism, but consumers have already unlocked some of its creative power with memorable and hilarious Amazon reviews. Of course, the internet has turned these into weapons against creators they don’t like or are upset with. The practice is so common among gaming fans that it has a name: “review bombing.” Steam, the popular PC game distribution service, is often the home for the angry mobs that want to punish a game or its studio with negative reviews, and now platform owner Valve is addressing the issue by showing more data about the user reviews — although developers are publicly doubting that this will lead to better understanding among potential customers.

To get more data as a customer on Steam, you can now click through to the user-reviews section on a game like Campo Santo’s Firewatch to see a chart that visualizes the number of positive and negative user reviews since it debuted. Valve claims this data will help customers spot review bombs that they can investigate themselves. Those customers can then decide if they agree or disagree with the mob based on that information. As an example of this, Firewatch’s Steam store page also has a warning notification that reads, “High volume of negative reviews detected: September 11-September 16.”

These changes come alongside Valve publically acknowledging that it wants to do something about review bombing. In a blog post, Steam engineer Alden Kroll explained why this practice is so disruptive to how the service normally operates.

“We’ve been planning some changes to user reviews for a while now, and we thought it’d be useful to give you some insight into our thinking on review bombing, which is one of the problems we’re tackling,” wrote Kroll. “On the one hand, the players doing the bombing are fulfilling the goal of user reviews – they’re voicing their opinion as to why other people shouldn’t buy the game. But one thing we’ve noticed is that the issue players are concerned about can often be outside the game itself. It might be that they’re unhappy with something the developer has said online, or about choices the developer has made in the Steam version of their game relative to other platforms, or simply that they don’t like the developer’s political convictions.”

Kroll explained that those issues aren’t “very relevant” to determining the potential value of a game for other consumers, so Valve explored a number of options about how to address review bombing. The company considered options like removing review scores, temporarily locking reviews during abnormal activity, and more. In the end, Valve decided to give people more data.

“We decided not to change the ways that players can review games, and instead focused on how potential purchasers can explore the review data,” wrote Kroll. “Starting today, each game page now contains a histogram of the positive-to-negative ratio of reviews over the entire lifetime of the game, and by clicking on any part of the histogram you’re able to read a sample of the reviews from that time period. As a potential purchaser, it’s easy to spot temporary distortions in the reviews, to investigate why that distortion occurred, and decide for yourself whether it’s something you care about. This approach has the advantage of never preventing anyone from submitting a review, but does require slightly more effort on the part of potential purchasers.”

But does that put too much onus on the customer? Consider Firewatch: To do anything with the information on its page, you’d have to Google the game. Doing that will reveal that a horde of furious gamers showed up to Firewatch’s Steam page to review-bomb it because one of the game’s creators filed a copyright claim on YouTube superstar PewDiePie’s videos featuring Firewatch. Campo Santo cofounder Sean Vanaman made that decision in response to PewDiePie using a racist slur twice during a live stream. OK, that’s great, but doesn’t all that work defeat the purpose of embedded customer reviews? Some people won’t want to do that research, and seeing “mixed” or “High volume of negative reviews detected” is enough to look for another game that doesn’t have so much drama surrounding it.

Some developers are echoing those feelings on social media.

After looking at it in-store, it feels even worse. Putting up a big yellow banner saying “CHECK OUT THIS REVIEW BOMB!” isn’t positive. pic.twitter.com/iESqUTC4xa

Seems like a copout, putting the onus onto the new customer to figure out if the mob are angrily spamming or not.

It’s a novel solution (especially for live service games), but i have no faith that most consumers will do the digging to see past the bombs

This reaction isn’t crazy. The human brain almost always favors the path of least resistance. A Stanford study found that state governments in the U.S. could increase participation in organ-donation programs by changing the signup procedure from opt-in to opt-out. People didn’t care to really think about their feelings about donating their organs if it meant changing a pre-selected option. And I’m betting that the average Steam shopper doesn’t want to have to go figure out how they feel about a review bomb.

Some game creators also noted that the histographs could backfire and encourage more review bombing. That’s because the chart presents the positive-vs-negative reviews almost like a head-to-head competition. Check out the image of the recent reviews for Firewatch. You can go day by day to figure out which side is “winning the war.” If you are already mad at the studio and you know that your “team” is losing, that might convince you to go submit your own review.

Not entirely sure about how “give review bombs more exposure, a permanent record, and gamify it with a graph they can min/max” fixes things.

This change only just went through, but the next developer to get review bombed can let Valve know if more information about negative reviews help insulate against any sales repercussions. The first impression here is that this extra data probably won’t get to the people who could use it to make smart purchasing decisions and instead could fuel online flame wars that dredge up review bombs in the first place.