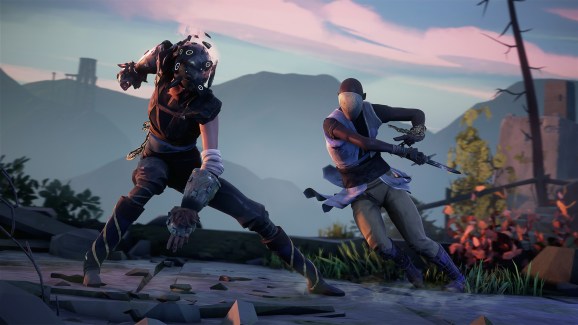 Absolver is getting a sizeable patch.

The Sloclap studio is pushing out an update to Absolver that will make changes to every aspect of the online melee adventure. This patch is available now, and it also includes six masks that tie into other games from publisher Devovler Digital. This comes as the game has already found success with more than 250,000 copies sold since launching August 29 on PC and console. That makes it one of Devolver’s fastest-selling games ever.

“Due to the success of Absolver and the hype for the upcoming Ruiner, we are now only publishing games with masks in them,” a Devolver spokesperson told GamesBeat.

In Absolver, you play as a martial-arts combatant in a Dark Souls-style world that mixes together a narrative adventure with online battles. Your character wears a mask and can master a variety of moves in multiple fighting disciplines. You can collect new masks by playing the game, and now that includes face accessories inspired by Hotline Miami, Enter the Gungeon, Mother Russia Bleeds, The Talos Principle, Shadow Warrior 2, and Ruiner.

You can see what each of those look like in the video below:

As for the changes, the highlight here is the work Sloclap has done to improve the connectivity for players on both PC and PlayStation 4. During launch week, players across all platforms encountered server errors that kept them offline for days at a time. The new patch should resolve most of those errors going forward, so people who gave up trying the online multiplayer campaign could give it another go starting now.

Other improvements include performance optimization, bug fixes, and most stability. Sloclap has also changed how certain abilities, attacks, and defensive moves work. You can get the full patch notes on Steam.