Augmented reality is one of the most talked-about features of the iOS 11 launch. When Apple unveiled its ARKit, it told developers it wanted to make iOS the “the largest AR platform in the world.”

Studios have published apps and games that are testing out new features and playing with the new tech, but as with virtual reality, developers will face the challenge of designing user interfaces and mechanics to fully utilize AR in an intuitive way.

Our roundup yesterday highlighted a few of the titles that are coming out, and here are a few more that are tackling the UI challenge in different ways. 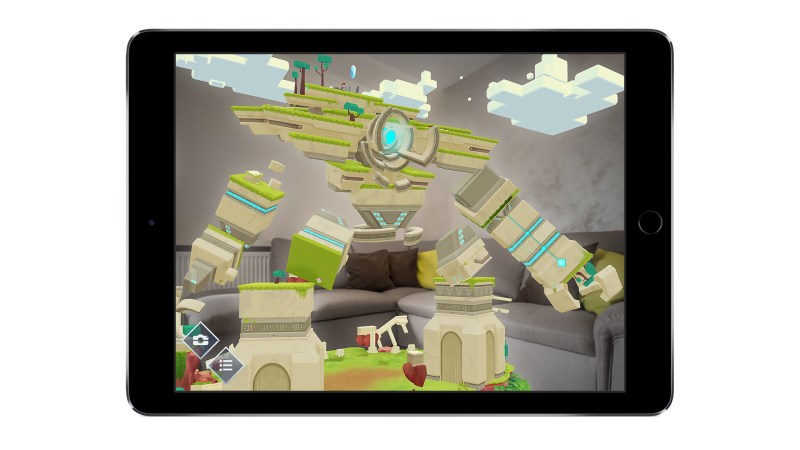 ARise features a tiny adventurer who explores a floating island and fairy tale ruins in your living room. It’s a kind of puzzle-platformer that hinges on you moving around and viewing the game from different perspectives to piece together parts of the world, like broken bridges, so that the little hero can continue on to retrieve magical artifacts. It’s out now, with three levels to explore and more coming later as free updates.

It’s the latest game from Climax Studios, which developed titles like the psychological horror Silent Hill: Shattered Memories along with the VR storybook adventure Lola and the Giant. CEO Simon Gardner says that part of the appeal of designing a game in AR is the accessibility factor.

“It’s fun to mix make-believe with the real world and it can be funny. However, remember one of the great things about ARKit is that it does lock the content — whether that be games or furniture apps — in the real world and so this allows for new game play to be implemented and new control systems to be used,” said Gardner in an email. “Our own game ARise has mostly managed to dispense with controls and so might be more accessible to people who find complex game controls difficult or annoying.”

Though ARise eschews the typical onscreen controls, moving around to interact with it is intuitive. Gardner says that it’s possible that this might cause some friction; after all, some players may not want to move around that much. But he views this as a potential strength of this kind of gameplay, adding in a social element.

“It’s also possible to play with someone else looking over your shoulder and giving help,” said Gardner. “It can be a little odd watching somebody play as they twist about looking for a puzzle solution, but it is interesting! If players really don’t want to circle the islands looking for clues we have put in a small ‘cheat’ that allows you to rotate those islands with a finger swipe. Probably makes it a little less embarrassing in the queue at the coffee shop.” 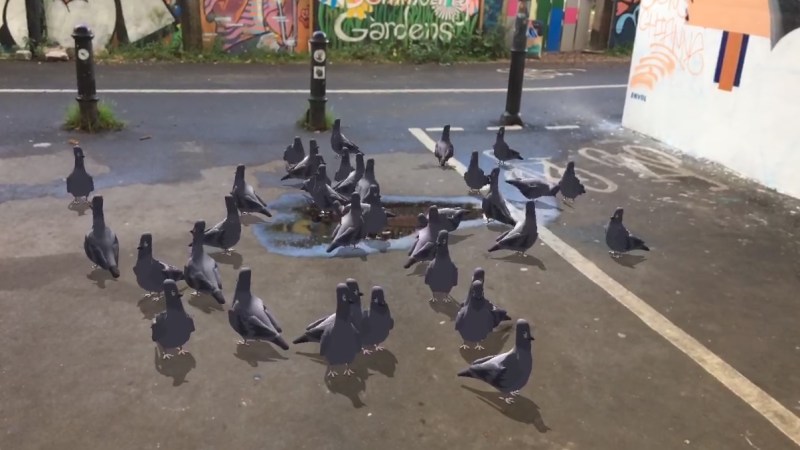 For some reason, video games love to do wacky things with pigeons, and Pigeon Panic is the latest game to answer the trash doves’ siren call. The premise is simple: You point your phone at the floor to dump a bunch of food and attract a horde of virtual pigeons. And then you have 20 seconds to run (in real life) through the pigeons and rack up points for each one you scare away.

“We were looking for inspiration to create our next internal project and got super excited by the prospect of working with AR,” said Shoard. “Up until now, the tech has always been on our radar, but integrating with iOS, a platform we’re very familiar with, and the prospect of a huge AR userbase overnight suddenly made it worthwhile to us.”

“We basically spent around two weeks trying to come up with a mechanic that would only work in AR, with a suitably silly subject to feel like it represented our team!” said Shoard. “We were sitting outside a coffee shop surrounded by pigeons, and it was one of those ‘wouldn’t it be cool if …’ moments, that actually turned into something!”

He credits Jennifer Ogbebor, Combo’s 17-year-old intern, with a good deal of the personality as well as the concept art. It’s a colorful, tongue-in-cheek game from a studio that splits its time working on personal experiments alongside for-hire work with other companies.

Combo submitted Pigeon Panic to the Apple App Store last night, so hopefully it will be available for download soon. I tried out the beta, and it was amusing — especially since I tried it in my apartment and the pigeons decided to roost in my kitchen sink. Combo does recommend that you play outside (where, I’m assuming, you’re still encouraged to harass virtual pigeons instead of actual birds).

It’s nothing fancy, but it’s all in good fun. You could argue that these kinds of goofy, simple games are sort of the fart apps of mobile AR, but its absurdity might just be enough to make you take out your phone and show a friend.

“Right now we just have a high score, but we’re planning on creating a global leaderboard and running total of all the pigeons scared across the world a little later — when we’re polished off some of the gameplay and difficulty levels,” said Shoard. Rac7‘s Splitter Critters is a papercraft puzzle game where you slice up the world and move around the sections to get tiny creatures back to their spaceships. It released earlier this year on iOS and Android, but yesterday it rolled out new AR features with the iOS 11 update.

“We’ve always thought of Splitter Critters as this little paper world that you cut into pieces, so in our heads it’s always been a somewhat physical environment,” said Jesse Ringrose, Rac7’s cofounder. “Once ARKit was announced we started playing around with ideas, and turning Splitter Critters into a diorama that you can plop down onto your desk — or hang from your ceiling — was a natural fit. Once we built a box around the game we started coming up with brand new game mechanics to take advantage of perspective, and that’s where the magic really started to happen.”

Splitter Critters first emerged from a three-day game jam with the theme around shapeshifting. The story is loose — all you know is there are a bunch of aliens and you’re shepherding them into spacecraft. Rather, Rac7 built the game up around the mechanics.

Ringrose says that crafting the new AR mode for Splitter Critters involved anticipating different user interactions since players can now move their phones around and look at the game from different angles. The AR mode features the world appearing inside a box that drops down from the ceiling, and putting the game in another virtual object gives it a sense of physical presence.

“One of the biggest ‘aha’ moments for us was figuring out how to make the camera feel better when you bump into objects,” said Ringrose. “This only works when the box is hanging in mid-air, but if you try to move through a solid wall of the box, it will push away and generate haptic feedback. The subtle feeling of ‘I’ve bumped into something in AR space’ feels like magic, and we’re looking to incorporate even more of that into our AR version.”

Though the current AR mode adds a nifty new way of viewing Splitter Critters, it’s still essentially the same game except now the papercraft aesthetic is more noticeable. You can lean in and see the different layers of the environment. Ringrose says that they’re working on a big update right now that will add more to the game.