Nvidia said today it is taking preorders for a $180 Shield TV set-top box with 16 gigabytes of memory. That’s about $20 off the previous price, and it shows the company is trying to remain competitive.

The move is a response to Apple’s announcement of a 4K Apple TV set-top box. Apple’s 32GB version goes for $180, and the 64GB version will cost $199. Apple TV 4K preorders start on September 15, and the devices ship on September 22.

Nvidia said the Android-based Shield TV offers a competitive price for those in the market for a streaming media player, both now and for the holidays — especially when compared to other devices on the market.

The Shield has movies, TV shows, and music, and it allows you to take things you’ve purchased on Google Play or compatible Android TV apps and stream them to your living room TV at 4K HDR resolution.

The Shield TV with game controller and remote is available for $200, and a Shield Pro with 500GB of storage sells for $300. Nvidia said preorders will ship on October 18. Nvidia’s comparison chart to other set-top boxes is below. 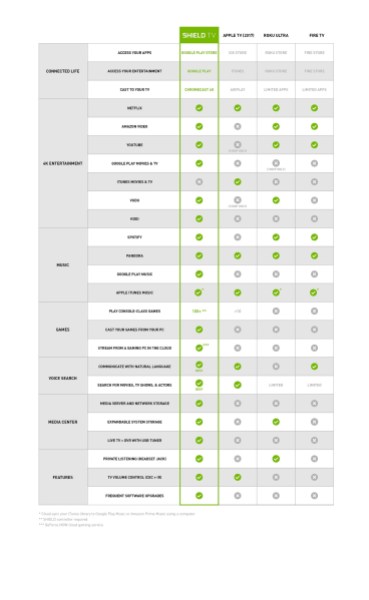