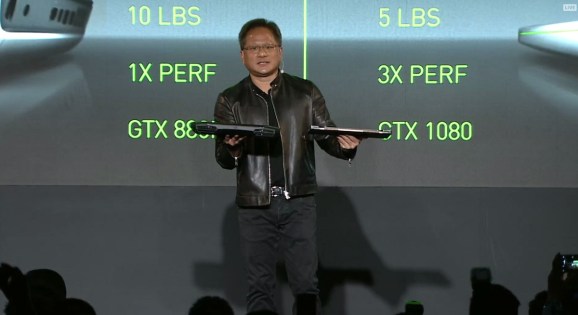 Jen-Hsun Huang, CEO of Nvidia, shows the difference between an older gaming laptop and one with Nvidia Max-Q.

Nvidia’s GPUs are continuing to fly off the manufacturing line and into the hands of consumers and cryptocurrency miners. Mizuho Financial Group analyst Vijay Rakesh is checking in with Asian equipment manufacturers who buy cards from Nvidia this week, and he reports that the company’s GPU shipments for the summer quarter could end up 30-to-50 percent ahead of what the company predicted. People looking to build GPU farms to “mine” Bitcoin-like digital currencies are one of the big reasons for those sales, but a shortage of DRAM (dynamic RAM) video memory is also limiting availability.

And all of this could end in you paying more for Nvidia’s chips.

In its communications with its investors and industry analysts, Nvidia has not hyped up the potential for cryptocurrency to fuel its sales. But if demand remains high even as GPU prices are increasing, then cryptocurrency is impossible to ignore as a major factor. Is demand still high, though? Absolutely.

“The OEMs also noted zero inventory of GPUs in the channel,” wrote Rakesh.

Demand isn’t the only consideration when it comes to price, though.

Industry intelligence firm IC Insights published a report about the DRAM market, which provides the speedy video memory that GPUs rely on. IC is forecasting a 40 percent increase in the price-per-bit for DRAM. That would represent the largest increase ever.

A big problem here is that the three remaining DRAM manufacturers — Samsung, SK Hynix, and Micron — have an adversarial relationship with Nvidia, AMD, and other companies that purchase the memory.  IC described how DRAM producers are sitting back and enjoying putting pressure on its customers.

“Just one year ago, DRAM buyers took full advantage of the oversupply portion of the cycle and negotiated the lowest price possible with the DRAM manufacturers, regardless of whether the DRAM suppliers lost money on the deal,” reads the IC Insights report. “Now, with tight capacity in the market, DRAM suppliers are getting their ‘payback’ and charging whatever the market will bear, regardless of whether the price increases hurt the users’ electronic-system sales or causes them to lose money.”

Samsung, SK Hynix, and Micron are all bringing in record profits right now, so all three seem reluctant to start a price war, and that could make prices prohibitively high and push down demand. But relief could come as Hynix has announced that it will increase its DRAM production capacity soon. If that shakes Samsung and Micron into reacting, then prices could stabilize and return to 2016 levels. Otherwise, expect the increased pricing for OEMs to filter down to retail soon.

All of this should affect AMD’s Radeon cards as well. Cryptocurrency miners tend to prefer the more efficient Radeons, and DRAM shortages are already causing AMD’s OEM partners to have to delay their versions of the company’s new Vega cards, according to rumor.