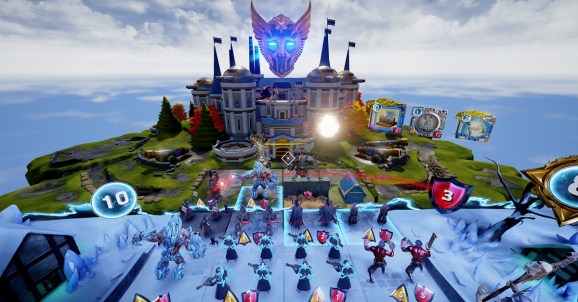 Collectible card game Dragon Front from High Voltage Software was one of the first games to offer VR cross-play support from Gear VR headsets to the Oculus Rift, so that players wearing the mobile VR headset could play against people wearing Rift. Now the company’s deal as an Oculus Studios exclusive has moved it into an interesting position — leading cross-play support to traditional 2D monitors through Facebook’s Gameroom.

The title’s arrival on the Facebook Gameroom PC store continues a multiyear trend we’ve noted of the social media giant integrating its 2014 acquisition of VR startup Oculus more deeply into its larger efforts. This is an important trend to note partially because many Rift and Gear VR owners are concerned how their personal information could be used by Facebook’s ad-driven business. In fact, it may figure into some buying decisions in choosing HTC Vive over the Facebook headset. Facebook has, for example, pushed logging into its service as the primary way of identifying yourself on its platform.

I asked High Voltage whether the title would be coming to mobile platforms like Apple’s iOS or Google’s Play Store, or if it might come to Steam and the HTC Vive. A spokesperson responded “while we continue our partnership with Oculus and Facebook we plan to focus on releasing new content and improving support for our three current platforms: Desktop PC via Facebook Gameroom, Gear VR, and Rift.” That response doesn’t sound promising for support beyond Facebook’s stores, but doesn’t rule it out either.

The cross-play support is surely a nice addition to the title as it continues to widen the player base for the game, which can drive competition in its community. The title being a turn-based card game also means it’s the perfect fit for cross-play support, as it should mean players on each platform shouldn’t have an advantage over the others.