The three Android-based winners emerged from a list of 10 audience favorites and a total of 20 finalists from hundreds of entries. They showed it’s still possible to make innovative, fun, and hilarious games with tiny development teams. 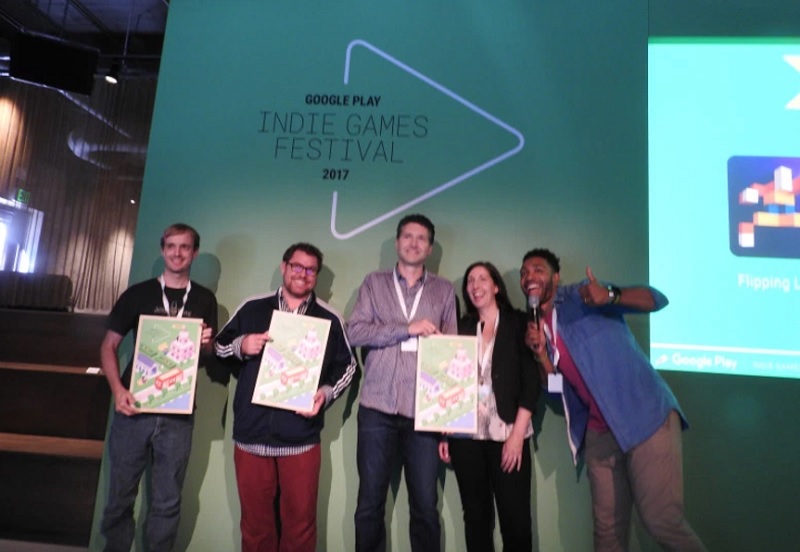 Above: The winners of the 2017 Google Play Independent Game Festival awards.

I was one of the judges. Other judges included Jamil Moledina, the games strategic lead at Google; Sarah Thomson, the business development lead for indie games at Google Play; Alex the Gamerette, a YouTube creator and senior editor at Futurism; and Lina Chen, the CEO of the Nix Hydra studio. The festival was held at Spin in San Francisco, and it drew hundreds of people. J.D. Witherspoon of “runJDrun” on YouTube was the emcee of the event. We judged the titles based on innovation, fun, design, and technical excellence. 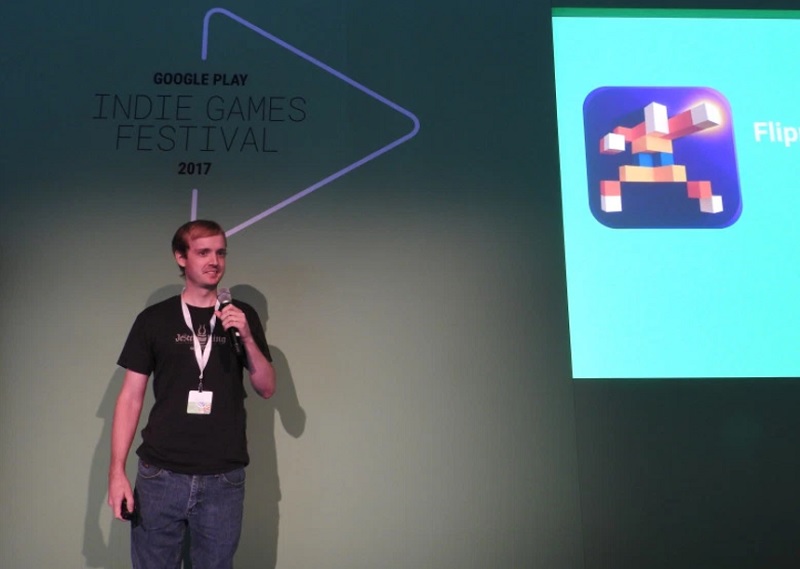 Above: Matt Meyer is co-creator of Flipping Legend at Noodlecake Studios.

Flipping Legend has been in the works for about two years. Matt Meyer of Austin, Texas, and Thomas Whetnall of London are the sole developers at The Hiding Spot. Whetnall handles the art, and Meyer came up with the design. You flip diagonally across a checkerboard. You have to avoid stakes and pits and other traps, and you can take out monsters by attacking them with a move. The character can also jump backward one square if you get into trouble. 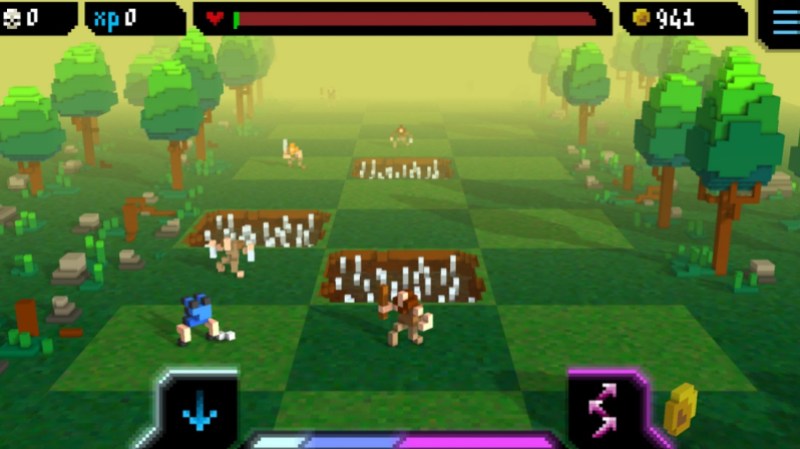 But you can only do that a limited number of times. A special move will help you clear out a bunch of enemies at once. You can play blocky characters built with an 8-bit art style: a ninja, an archer, or a wizard. You can control the character with your thumbs. You tap the screen with your left thumb to make the character move right, or with your right thumb to make it move left. It’s simple and fast. It’s been out on Android for a couple of months.

“It’s in the vein of other infinite runners, but I wanted to do something that was more puzzle-like,” Meyer said, in an interview with GamesBeat. 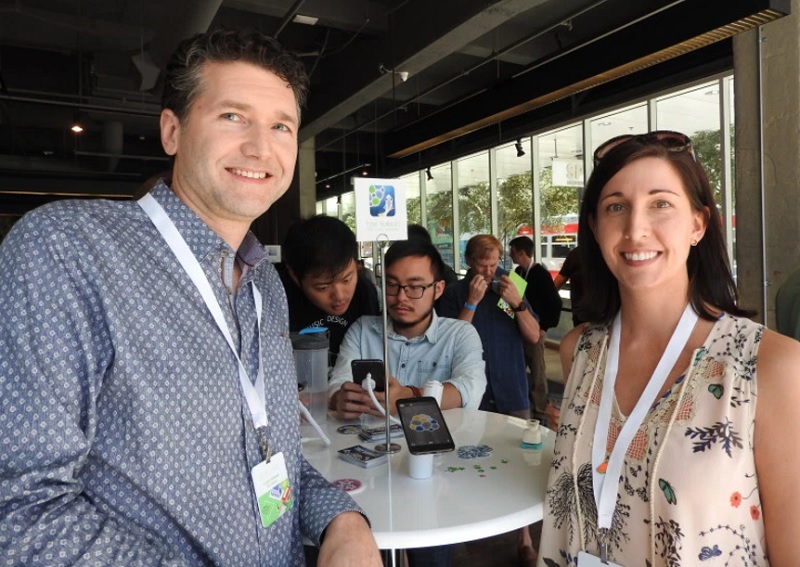 Stuart Denman and his wife, Paulette, of Pine Street Codeworks have been working on the Tiny Bubbles game for a few years, but he has been thinking about it for a very long time. Denman, a 25-year game veteran in Seattle, was inspired by his grandfather, Cyril Sterling Smith, who was a physicist and wrote research papers on the nature of soap bubbles. Denman recalls reading those papers about 25 years ago, and he buried them in the back of his mind. His game realistically models the physics of soap bubbles, which are mathematically tough to create.

You try to match four same-color bubbles in a row, like in a match-3 game. But you can do things like snip the side of a wall and pop a bubble, so that two colors bleed into one and form a new color. 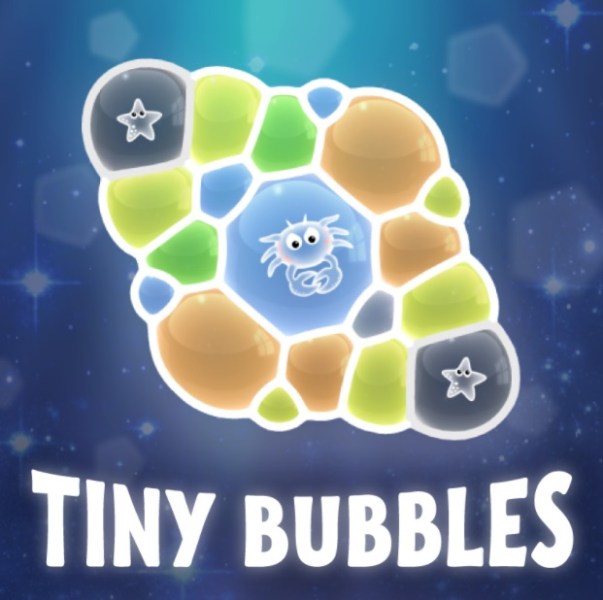 Above: Tiny Bubbles is a match-4 game based on soap bubbles.

“You wouldn’t believe how many hits you get when you search for bubble games in the app store,” Denman said. “But we wanted to create bubbles that behaved in a realistic way and led to new gameplay.”

Other developers include James Hutt and Kristopher Larson. Tiny Bubbles already has more than 168 levels, and Denman said the Unity-based game could go into soft launch in about a month. Denman is targeting Google Play, iOS, Windows, and the Mac. Denman 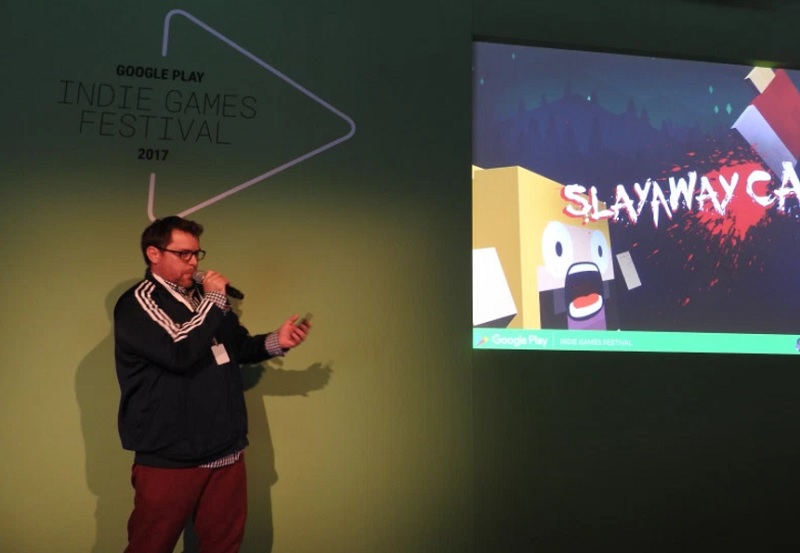 Above: Nathan Schmold is one of the makers of Slayaway Camp.

Of the winners, Slayaway Camp was by far the funniest. The puzzle game sprang form the minds of Jason Kapalka, cofounder of PopCap Games; Ido Yehieli (of Berlin), and Nate Schmold, developer of Cosmochoria. They’ve been working on it for two years at Blue Wizard Digital in Vancouver.

Slayaway Camp features a cute 8-bit art style where blocky summer campers are slain by a serial killer, also in the form of an 8-bit block character. The contrast between the cartoon art style and the bloody gameplay is what makes it so crazy. Schmold gave a funny presentation in a stilted voice.

It’s based on a Sokoban-style block puzzle, where you can slide characters sideways or up and down. You control the serial killer, and when your character catches another on the board, you kill that hapless victim. You can do clever moves, like killing one victim who is standing next to another. You can then scare that victim into running into a fire. It took the team of three about two years to make. The game is already out on Steam, and

“It’s a horror movie homage,” Schmold said in an interview. “We worked out the art style to be paradoxical, with these cute little guys getting savagely murdered. We played that up.”

In addition to the top three, the other seven audience favorites were Age of Rivals; Beast Brawlers; Covens; Crashy Cars (one of my favorites); Jigsaw Story; Loteria; and Splitter Critters.

And other games that made it into the top 20 included Dokudo, Maruta Escape, No Stranger, Space Tunnel, Star Vikings, Topsoil, Brave Hand, Gladiator Rising, Storm Wars, and 7 Pin Pool.

I was impressed with most of the games and the dedication that the indie developers showed in making their games over a couple of years with small teams and shoestring budgets.

The winners will get promotion on the Google Play store; promotion on Android developer and Google Play channels; premium placement in the dedicated Indie Corner collection in the Americas and European Google Play store for one month; a Google Pixel XL 32GB device; a Daydream View device; $20,000 credit on Google Cloud, and passes to Google events.