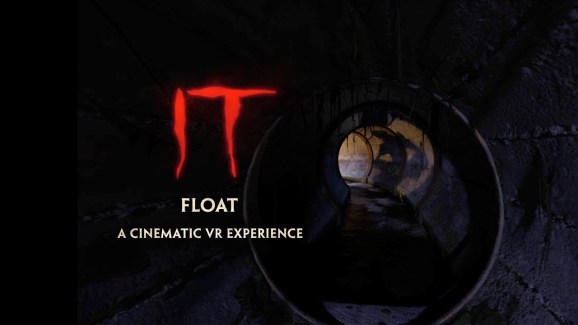 It: FLOAT, the VR experience

As a filmmaker and movie aficionado, watching viewers delight in VR entertainment as enthusiastically as they do hit movies is rewarding, which makes it an honor to create virtual reality experiences for beloved movie franchises. But creating VR that will pass muster with passionate fans of a blockbuster franchise is not an easy undertaking.

In order to succeed with VR projects for the major studios, creators have to understand some critical rules of the game. Being associated with a revered movie franchise doesn’t guarantee the success of these experiences. Hard work goes into crafting gripping virtual reality experiences that best represent the films that inspired them and attract even more fans to the box office. It also helps to have forward thinking creative executives at the studio that are willing to take risks on this emerging technology.

Working on virtual reality experiences for hit movies, such as Warner Bros. It: FLOAT, Annabelle: Creation VR-Bee’s Room and The Conjuring 2 — Experience Enfield VR and upcoming 20th Century Fox’s The Greatest Showman, I’ve taken away a few keys to success with my studio clients and, ultimately, with fans.

First, VR studios must create experiences that pass the test of discriminating fans, borderline obsessed with character and storyline. Where the goal of VR for major film franchises is to bring lasting fans on board, the opposite could result if viewers aren’t pleased. Storytelling is paramount and often overlooked but it’s the most important thing to consider when conceptualizing these experiences. VR experiences for films — often released before the films, thus acting as previews — can conceivably impact the commercial success of the motion picture. An experience must be in careful sync with key plot points and franchise story arcs to win over audiences. At their best, large franchise experiences give users the thrill of having the chance to “become” or “meet” their favorite movie heroes and villains or step into pulse-pounding action.

Achieving a balance of proper experience length, content, and suspense makes for a successful film studio VR project. VR Experiences that do a really interesting job of horror in the VR space include Guy Shermaldine’s Webby Award-winning Catatonic experience influenced many of us in VR filmmaking. It was clear that Guy was very clever about how to present it. The activation is great as they have these nurses standing next to wheelchairs waiting for you to put on the headset. They place the headset on you and there you are in a wheelchair, but now in a mental institute — a perfect example of how VR experiences can and should be treated as events beyond just putting on a headset.

Here They Lie, a game created by Tangentlmen for PSVR, also works really well. It has this great monochromatic look to it and is almost devoid of jump scares. It’s all ambiance, and to me is one of the most visceral experiences in the space. It speaks to how effective the medium can be at tapping into real human emotions and how we experience fear.

A second key to success VR creators must understand is the need to live up to the high production values attained by top-tier studio films. A creator’s job is to get people invested in the characters and be absorbed by the world of the film and become lifelong fans. Towards that end, it’s been helpful for us to spend time on set during production for the films. There, we have the unique opportunity to study each filmmaker’s vision, as well as see them direct actors from the film and get to the heart of their performance. As a result, we better understand what the filmmakers are developing with these characters and how to include their cinematography techniques in the creative for each VR experience.

Filmmakers can also provide insight on such details as setting, consistent lighting, and even the effects of believable sound in VR — achieved through spatial audio. Sound is a factor not to be overlooked when you’re looking to maximize the impact of an experience. VR is changing so fast, after all, that every project brings new tool sets. We may use new cameras or DIY rigs, for example, and we depend on the assistance of film engineers and cinematographers to shoot successfully.

Keeping these critical components in mind, my team and I typically come up with a viable story line first. Creating a complete story-driven experience is always our first priority. Then, we turn to the expertise of our creative partners working in film to come to the studio and contribute to the process of shooting, post production and valuable plot insight.

Be creative with VR

Lastly, VR creators producing experiences for major films must find new ways to use this evolving medium. Creators must raise the technical bar every time an experience is created, in order to keep a young, tech-savvy audiences engaged and — quite literally — thrilled. Not only must the experience be free of technical glitches, but it must also add something to the movie’s narrative in a way that warrants the use of VR technology. Experiences where VR is perceived by audiences as an afterthought to the film, or a tacked-on gimmick to hop on the latest trend, often come under attack.

Innovation occurs when you assemble a talented crew of artists that are as passionate about the medium and the project as you are. VR has given many young, talented artists in production, post and VFX the opportunity to cultivate their talents without the hierarchy that comes in other disciplines. At SunnyBoy we are constantly experimenting and learning new things. It’s exciting for all of us to be involved in the creation of a new art form and we appreciate how rare it is to have this opportunity to truly discover something before the rules have been written.

We are also believers in the community and taking in what others in the VR space are setting out to accomplish. VR experimentation is constant, and just like any other art form, creators have to study the work of leading contemporaries. On the flip side, VR is in such a nascent stage right now that nearly anything goes, as long as it’s creative and insightful. It’s not as critical to be ahead of the trends, but to be a part of writing the language for this new medium. The way to do that is to consume content and isolate what works and what is unique for your own practice. Every time I watch new experiences — while they may not work as whole — I always find an aspect or quality that I haven’t seen before and store that away for the next project.

Using these three keys to success, our experiences have represented their movie franchises well and left fans excited by another story being added to their favorite film’s universe.

Craig S. Phillips is a creative director and co-owner of SunnyBoy Entertainment, a full-service creative studio specializing in a new era of entertainment.