Pinball arcades are pretty scarce these days, but Zen Studios‘ Pinball FX3 gives you a whole pinball arcade in a single app for the consoles and the PC.

The game is available as a free download, with one free table called Sorcerer’s Lair. If you want to play more tables, you can buy them at prices ranging from $5 for two games to $10 for full packs. Today, the company is launching its brand new tables based on classic Universal Studios movies such as Back to the Future. All told, 68 pinball tables are available for Pinball FX3.

Starting today, you can play Pinball FX3 on Windows, PlayStation 4, or the Xbox One. It is a sequel to the Pinball FX2, which debuted in 2010. Pinball FX debuted in 2007 as one of the original games-as-service, where you can get the basic app for free and then pay for the tables that you play. The previous title, Pinball FX2, has been selling steadily for more than seven years. 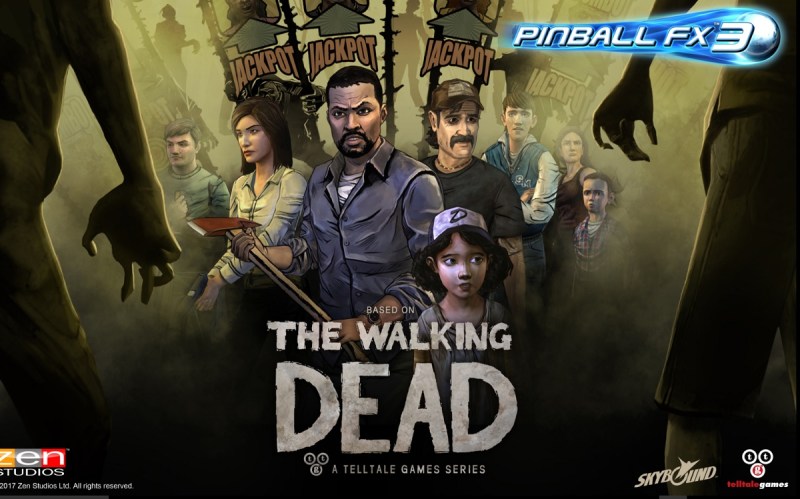 Above: Zen’s pinball version of The Walking Dead.

If you bought games on the previous platforms in the past, you can play those games on Pinball FX3 as well.

“We are keeping those purchases intact, and we have updated the tables with real-time lighting and dynamic shadows,” said Mel Kirk, vice president of marketing and public relations at Zen Studios, in an interview with GamesBeat. “We touched them up and are giving them to our community. We want them to come with us to the next generation.”

The Pinball FX series has been good for Zen Studios, which is based near Yosemite, California, and in Budapest, Hungary. It has more than 80 employees and four development teams now.

The Universal Classics Pinball pack features tables for E.T, Jaws and Back to the Future. Those tables will also release on the Zen Pinball platform on mobile and the Mac. Kirk said he has played all 68 pinball tables.