Bethesda’s Wolfenstein II: The New Colossus is a shooter that everyone will like when it debuts on October 27. It has a strong and funny story. It has some difficult foes who are heavily armed and armored. But you can steal their heavy weapons and use them to kill the Nazis.

I played another big chunk of The New Colossus recently at a Bethesda preview event. And of course it has both great action and some outstanding cut scenes as the hero B.J. Blazkowicz fights his way into New Orleans in Nazi-controlled America.  (See our earlier interview with the creative director here).

The game is a sequel to the 2014 game, Wolfenstein: The New Order, which depicted the world of Europe in an alternate history where the Nazis won World War II. By 1961, they can crushed all opposition and had taken over America as well. The sequel — which arrives on October 27 on the Xbox One, PlayStation 4, and Windows — is set in the U.S., where “Nazification” is replacing and corrupting American culture. 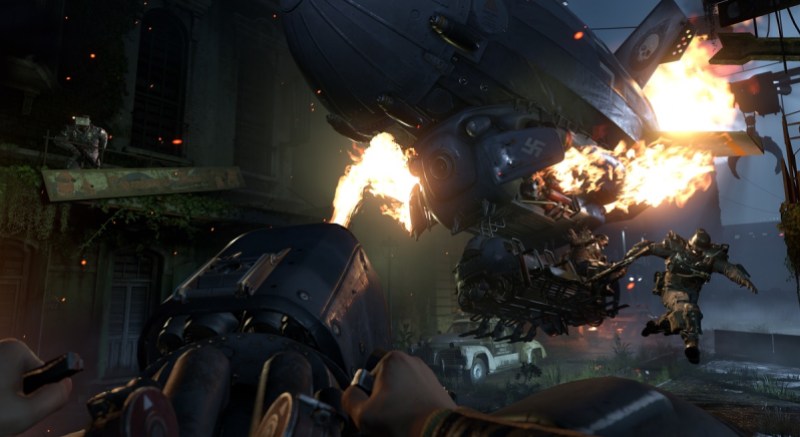 Above: Flamethrowers come in handy.

During previous events, I played the beginning of the game and another event where I played a level set in Roswell, New Mexico, where the Nazis had a secret facility. I had an especially hard time getting through the firefight the last time. But this new battle in New Orleans, where the Nazis have encircled the trouble-making resisters, was a different experience.

Blazkowicz, the hero of the original Wolfenstein, awakens from a coma and tries to lead a new American Revolution against the Nazi overlords. At the beginning, he and his cohorts are underdogs, and they were easy prey for the heavily armored Nazis. But in this level, Blazkowicz is getting back into the swing of things. There’s a funny sex scene (yes, it’s mature rated) in the cinematic. And Grace Walker, one of the leaders of the resistance, dispatches Blazkowicz to New Orleans, where he infiltrates the city by being shot in a torpedo from a submarine.

Blazkowicz fights his way to a rebel leader named Horton. Then he sets out to take back the streets of New Orleans. The Nazi Supersoldaten oppressors have been purging the quarantined city, killing indiscriminately, and New Orleans is just a burned-out ruin.

Since I played through the predecessor game, I knew that Wolfenstein II would be a tough slog. But so far, it’s all about making sure you don’t bring a knife to a gun fight. If you’ve got the right weapon, the armor on the masked Nazi soldiers will melt away. And that was the case in New Orleans, where the ambient noise is gunfire and screams.

Above: Turning the tables on the Nazis in Wolfenstein II: The New Colossus.

Blazkowicz had some new abilities. Ram Shackles allows him to smash his way through walls. A Constrictor Harness allows him to squeeze into tiny crevices and surprise the enemy. And the Battle Walker allows him to walk on mechanical stilts and get above the fray.

At the outset, I had to survive a firefight with a bunch of armored soldiers with machine guns, and then take on a Panzerhund, a huge mechanical wolf-like beast that was like a walking tank. I managed to survive that battle by moving indoors and peeking out to take pot shots at the Panzerhund. It was difficult fighting, but I only had to play it a couple of times to get through it. I got a hold of a Sturmgewehr, a high-caliber automatic rifle used by the Nazi’s elite soldiers. It was sweet.

But I had even more fun with the Lasergewehr, a heavy laser weapon that was dropped by a dead Nazi super soldier. It fires one shot and essentially melts the enemies into bloody messes. It was very satisfying. I also enjoyed picking up a Dieselgewehr, which fires explosive shots. And the flamethrower came in handy in taking out a big Panzerhund. But the most fun I had was hacking a Panzerhund and then riding it into battle, firing flaming shots at the Nazis who fled my onslaught. I can’t tell you how satisfying it was to use the heavy weapons against the Nazis, after they spent so much time using them against me.

Here’s the first half hour of the New Orleans level.

And this video shows what happens when you take over the mechanical monster, the Panzerhund, and turn it against the Nazis.