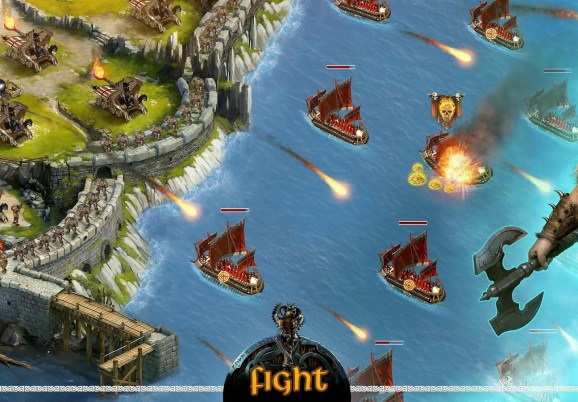 Plarium specializes in massively multiplayer online games such as Soldiers Inc. and Throne: Kingdom at War, which mainly focus on strategic gameplay. The mobile and social games publisher announced today that it’s acquired Rumble Entertainment (also known as Rumble Games), a studio that focuses on fantasy role-playing games such as Alliance: Heroes of the Spire and KingsRoad.

“In many ways this acquisition was a natural extension for us, because our focus has been on creating web and mobile games with strategy and RPG gameplay elements for a hardcore gaming audience, which is comparable to Rumble’s target audience,” said Plarium’s chief marketing officer and cofounder Gabi Shalel in an email. “Rumble Games titles have similar themes but are more focused on action/RPG components. Ultimately, Rumble can help us expand into the RPG market.”

Plarium first started making games on the web, but it now focuses on mobile. Shalel says that it noticed an absence of strategy RPG games, which is a genre that the team is passionate about, and so they decided to remedy that. It mainly develops strategy games with some puzzlers. Its most-downloaded title is Family Zoo: The Story, a match-3 that launched in June and was downloaded around 800,000 times last month, according to market analyst Sensor Tower. At the No. 2 spot is the MMO strategy game Vikings: War of Clans, which was downloaded 500,000 times last month despite launching in 2015. Vikings earned an estimated $3 million in revenue in August alone.

Most of Plarium’s titles, like Vikings, are MMOs and feature a social component. Across mobile, social, and web, its games reach an audience of over 250 million.

“When we started Plarium, it was right at the time that social gaming was just getting popular,” said Shalel. “When the market was shifting toward mobile, we began creating mobile adaptations of some of our popular social games, like Stormfall: Age of War, and developing new ones like Vikings: War of Clans.”

In addition to developing its own original titles, it’s created mobile games based on movie franchises such as Terminator Genisys. The key in all their titles, Shalel says, is the multiplayer component. Plarium wants to enable players to team up in alliances to replicate the feel of preparing for a big battle.

“In fact, certain clans have been together for years now and have actually met in person from around the globe,” said Shalel. “Being able to facilitate authentic clans isn’t just about making sure multiplayer components inside the game are good, but also encouraging communication outside the game on forums. It’s these elements, and our loyal fanbase, that helped us build what we have today.”

Shalel says that they’re working on some new projects right now, but nothing he could talk about just yet. Rumble Games will continue developing its own titles, complementing Plarium’s roster of strategy games with RPGs.