Dystopia has never looked as good as it does in Ruiner, a fast-paced cyberpunk top-down shooter that debuted Tuesday for PC, Xbox One, and PlayStation 4. It’s the debut from indie studio Reikon Games. Devolver Digital, who’s no stranger to masked protagonists with a penchant for violence, is the publisher of this Polish project.

At the start, you know nothing about the nameless, faceless main character. He communicates only with his digital mask, which displays neon threats and the occasional requisite Chinese characters. Reikon studded Ruiner with these kinds of cyberpunk tropes — biomechanical implants, digital interfaces, rampant hackers, nefarious organizations, and a vaguely Asia-inspired metropolitan setting — but its style sets it apart. It’s got a graphic novel aesthetic that’s awash in saturated colors, and as you traverse nightmarish factories and underground lairs, your screen occasionally glitches in and out.

Game director Jakub Styliński credits creative director Benedykt Szneider with the overall look and feel. He says that a lot of the visual inspiration came from Japanese animation, such as Akira, Serial Experiments Lain, and Ghost in the Shell, as well as Hideo Kojima’s Metal Gear Solid series.

“Other than that, we wanted to go for cyberpunk, but not necessarily with all the rain and the darkness that it usually looks like,” said Styliński in a phone call with GamesBeat. “The city and most of the locations are pretty brutal and maybe depressing, but we weren’t going into the whole ‘night all the time, raining all the time’ vibe. We wanted to make it a little bit different.” 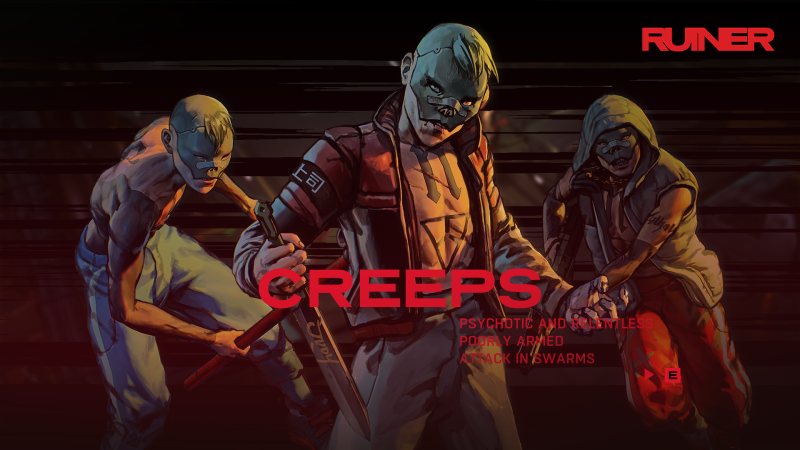 While it’s true that Ruiner is dark and dystopian, it also features tongue-in-cheek humor. You see this in little side quests, such as when you have to hack cats — yes, you get to crack the code of little fluffy kitties — because they’re using telepathy to spy on the city. And when minibosses appear, they always take the time to toss out cheesy one-liners before getting ready to smash your face in. And smash your face in they will, because the gameplay is resolutely punishing.

Styliński says that the team wanted to create a game that they wanted to play, which apparently means brutal battles with high body counts.

“We know there’s a niche of players that also want to be able to challenge themselves by playing a game,” said Styliński. “It’s punishing, but we also give you the ability to re-spawn pretty much immediately. There’s no cost to dying. We also give players the ability to change their skills all the time. We feel it might be punishing, but we give players quite a few tools to solve some situations.”

Those tools include electroshock bombs, hacking into nearby enemies, a dash that can slow time down to a crawl, and an energy shield that can repel bullets.

And guns — lots of them.

Aside from the combat, the main story of Ruiner revolves around trying to rescue your brother from a corporation called Heaven. The protagonist is a blank canvas who’s basically at the behest of a hacker who is simply called Her. She directs him from location to location, where he fights hordes of killer maniacs and cyborg assassins, but the end goal isn’t entirely clear. You’re not even sure if you should trust Her, but you really have no choice. Occasionally, you can select whether you want to nod or crack your knuckles when you’re in a conversation, but that has no bearing on the outcome of the situation.

“It’s a small joke inside the team,” said Styliński. “Many games have those options in the dialogue, but they don’t really mean anything. Whatever choice you make, you go to the same place. We went all the way and you can only usually nod or shrug, and you have no choice at all.”

The indie scene in Poland 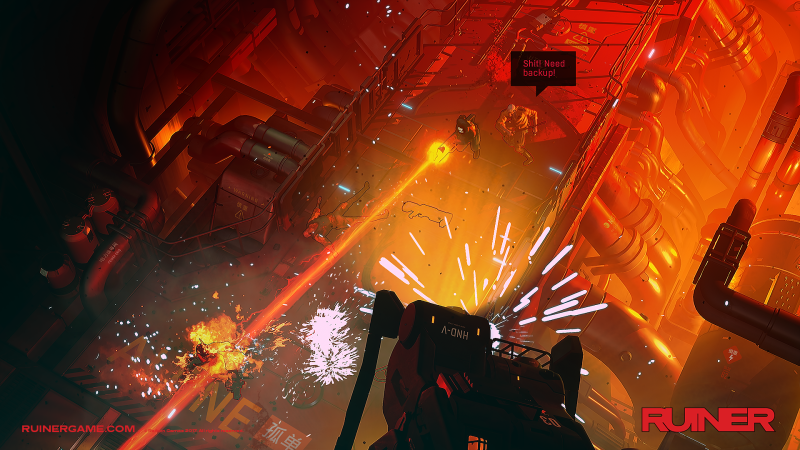 Reikon is based in Warsaw, and it’s part of a cadre of developers in Poland who are quietly creating quality games, even though the country isn’t receiving as much attention as its Scandinavian neighbors. Its team has previously worked on titles such as the Witcher series, Dead Island, and Dying Light. Styliński says that the indie development community in Poland is still quite scattered, and though they interfaced with some of their peers at other studios, they were mostly on their own.

“We have some contacts and we get some support from different developers, but to be honest, we’re kind of — not completely — but a little bit isolated most of the time. We’re very much on our own,” said Styliński. “We’re in the capital of Poland, in the very center of the city, but it’s like we’re on a small island.”

Styliński says that opportunities are scarce for developers to meet one another, and many indie studios can’t afford to travel to the U.S. for big conventions like PAX. And though Polish devs are starting to attract more international attention, Styliński says that just being in Poland can dampen the amount of visibility and make it hard for devs to get the word out about their games. For instance, though members of the Reikon team have previously worked on critically acclaimed games such as The Witcher and The Witcher 2 as well as indie hits like This War of Mine, it still had trouble getting replies from publishers.

“We actually contacted, I don’t know, 15 or 20 publishers, just writing them about how we were making this game and showing materials and stuff like that,” said Styliński. “We didn’t get too many replies. Most people ignored us. We’re a new company they’ve never heard of.”

Reikon didn’t even try to pitch Devolver at the start, thinking that the publisher was too large and well-known to take an interest in its small studio and game. However, after radio silence from the others, it pinged Devolver and got a reply straight away.

It’s been six years since the former Poland Prime Minister Donald Tusk gifted former President Barack Obama with a copy of The Witcher 2 to raise awareness of Polish games, and Styliński says that the landscape is changing very quickly. Thanks to new government funding projects, it’s easier now for studios to apply for grants. Organizations are springing up like the non-profit Indie Games Poland and the Polish Games Association, which aims to increase industry recognition. Developers can showcase their work at local games festivals like Poznan Game Arena and Pixel Heaven.

“Really, the huge boost in Polish game devs started three, maybe four years ago,” said Styliński. “There were quite a few bigger companies back then, and of course indies, but the speed with which new companies are popping up is getting faster and faster. I think it’s a matter of time.”

There is one challenge that may never go away, though.

“The weather,” said Styliński with a laugh. “It sucks. Most of the year is gray and rainy. Very gray and sad.”