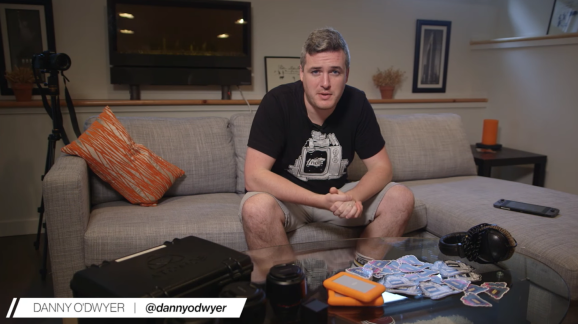 Danny O'Dwyer runs NoClip, and he is completely funded outside of YouTube.

YouTube creators are still dealing with the ramifications of the adpocalypse brought on in part by superstar PewDiePie repeatedly making jokes sympathetic toward Nazis. That made it more difficult for people to earn revenue on Google’s video platform, and now YouTube has changed its policy so that creators have to agree to its partnership program in order to add links to any external site, such as Patreon. This is a new obstacle that may cost creators revenue from sources outside of Google’s provided avenues, and YouTube’s mixed messaging is causing anxiety for those creators.

When creators upload a video, they can select to add an “endscreen” on YouTube the provides dynamic links to other YouTube videos or external websites. But if you are not a partner, you will now see a warning that this option is “not enabled” for you. If you click through to the support page about this, Google said your channel had to be monetizing.

“To link to your website from videos, you also need to be monetizing your channel,” Google’s support site read this morning when this change first scared some non-partnered creators.

Google has since updated the support page to say that “you also need to be part of the YouTube Partner Program.”

That’s not how it worked before today. Channels like Innuendo Studios could add links inside their videos using YouTube’s tools, even if they haven’t set up monetization through that service. Creators used this to funnel viewers to their Pateron pages to invite fans to take action and contribute as financial patrons. Many medium-sized YouTube stars have shifted to a model where they do not try to generate revenue through YouTube ads and instead rely entirely on community funding. Gaming channels like NoClip, Clothmap, and Innuendo Studios all do this, and that enables them to stay above YouTube’s ever-changing ad landscape. The pitch for NoClip and Clothmap explicitly highlight that they give away high-quality documentaries about video games ad-free.

I reached out to Google, and the company claims that — despite what its support page says — this isn’t actually about monetizing channels.

“In order to use externally-linking end cards in videos, creators are being asked to join the YouTube Partner program, so that we can evaluate the validity of the channel as well as determine whether the channel is following our community guidelines,” a YouTube spokesperson said. “This update is meant to curb abuse and does not affect current YouTube partners or the availability of existing end cards. Additionally channels do not have to actually monetize any videos as part of this requirement.”

I asked Google for examples of the violation that spurred this action, and it simply linked me to its policy-and-safety page in its community guidelines. That didn’t provide any specific examples or anything beyond saying that it is seeing a recent spike in people breaking its rules. So even as Google is saying its new linking policy is about community moderation, a lot of creators are still concerned that this is part of an ongoing trend to slowly box Patreon out of YouTube.

The company said that this isn’t about crowdfunding or Patreon. The policy applies to all outgoing links, but YouTube already has millions of partners who are using external links without any issues. Google also says that once channels are approved as a partner, they can go back to using links without actually having to turn on monetization for their videos.

That justification doesn’t help the creators who will now have to partner up with YouTube to maintain access to the external linking, and that will give Google a chance to expose these often influential creators to some of its products — like the newly launched Sponsorship program.

For Patreon-funded creators like NoClip’s Danny O’Dwyer, he thinks Google has the right to make a move like this since it is already hosting his videos for free.

Honestly, I still find it amazing that we can stream millions of hours of video for free with ad-rev turned off, so yea sure go ahead YT.

Innuendo Studios’ Ian Danskin also sees this new policy as a way for YouTube to herd some of its creators into the partner program and Google’s products.

“It used to be that we included links with annotations, which, I believe, could link to anything,” Innuendo Studios creator Ian Danskin explained in a note to GamesBeat. “Then YouTube started pushing the cards system, which only let you link to approved sites. Patreon was OK, but not crowdfunding of your own creation.”

The card system are those tiny notification chimes that pop up over YouTube videos on the web and mobile. Creators can control where these go and what they link to as long as YouTube approves. Endscreen are an even more effective version of cards that overtakes the entire video screen for the last 20 seconds.

“With endscreens, [you could add links] only to approved sites and only if you included an endscreen to another video on YouTube,” said Danskin. “So you could only drive traffic off-site if you were also driving traffic to YouTube.”

But this new policy goes even further and completely shuts down external linking in endscreens for channels that do not agree to YouTube’s partnership program. You can still put that same link in the description of the video, but that’s not nearly as effective.

“Endscreens are the only viable way to drive traffic to your Patreon,” said Danskin. “Until yesterday, you could link to Patreon with an endscreen provided you also had link to another video on YouTube.”

In August, in response to concerns about the adpocalypse and YouTube marking many game-related videos as “not suitable for all advertisers,” YouTube said it was working on finding more ways for creators to earn a living.

“We’re very focused on creating more ways for gamers — and creators of all kinds — to earn money on YouTube,” YouTube Gaming boss Ryan “Fwiz” Wyatt wrote in a blog post in August. “That’s why we acquired FameBit to help creators partner with brands and why we’re experimenting with sponsorships in the YouTube Gaming app. We even launched Super Chat so that your biggest fans can give you money for serving up chicken dinners while live streaming PUBG.”

Google says this isn’t about people using crowdfunding and that it just made this change due to unspecified TOS violations. In response to that, the company decided that moderating violators was more important than maintaining linking privileges for non-partner channels. That seems like an extreme action — especially since YouTube already treats crowdfunding sites differently from any random link. Patreon is part of YouTube’s pre-approved list, but to add a unique link to your personal site (or some malware or something), you need to go through a separate approval process.

It seems like YouTube could effectively accomplish the same moderation by preventing non-partnered channels from linking to any site that is not pre-approved. Alternatively, the company could just do the moderation during the process where it approves the link in the first place.

I’ve asked Google why it didn’t take one of those other routes, and a spokesperson explained to me that even legitimate sites (like one of the pre-approved crowdfunding platforms) can feed into abusive sites, and Google doesn’t want to support that. As for how this is different from approving each link individually like it already does, Google says it can check to see if a site complies with its guidelines if it goes through the partnership program.

But until those questions are answered, it’s easy to see why some creators are skeptical of Google and think that YouTube is hoping it could attract some of the revenue that is currently going to Patreon.

Update, 8 p.m. Pacific: Google has updated the language of its support site and to clean up some wording.