I wasn’t a huge fan of the first episode of Telltale Games’s Batman: The Enemy Within, so I approached Episode Two, The Pact, with caution. Thankfully, it features a meatier story, more difficult choices, and the introduction of an element of intrigue that could possibly lead to an interesting payoff down the line. Episodes One and Two of Batman: The Enemy Within will be available on October 3 for PC, Mac, Xbox One, and PlayStation 4, as well as on iOS and Android.

Episode One’s bright spot was its bone-breaking quicktime events and fast-paced, Batarang-flinging action. Episode Two surrenders all that for more dialogue and story, and it worked.

You’re Bruce Wayne for most of the game, which was a smart move as it forces the player into some gleefully cringe-inducing situations fraught with awkwardness. If you’re really quiet, you can almost hear the sound of Bruce’s reputation as an upstanding citizen crumbling into nothingness.

You spend a lot of time with pre-Joker John Doe, and each moment is loaded with meaningful decisions. Should you make promises that you know you can’t keep? How do you stay friends with a psychopath, and is that even something you want? Is it possible to thwart John’s descent into murderous madness, or is the birth of Joker an inevitability?

In the fleeting moments when you put on the Batsuit, you’re again forced to decide between your loyalty to Jim Gordon and the practicality of an alliance with The Agency’s Amanda Waller. This time, it feels a lot tougher because the playing field’s changed. Not only does Waller have leverage over Batman because she knows his true identity, but the situation you’re in is now much more tactical and perilous. You’re undercover as Bruce with the Joker’s group of maniacs, and you have to ask yourself if Gordon is really the right guy to pull you out if things go sideways.

Now I’m not a big fan of Bane. It’s not that he’s the you-know-what of my existence necessarily. It’s just that I find him a little boring. However, Telltale’s incarnation grabbed my attention, and not just because I could actually understand what he was saying. When you first see Bane, you feel a little kick of adrenaline. His appearance carries all the weight of Batman’s bloody history with him, and I found myself wondering where exactly this story was going. It added a sudden unexpected urgency to the combat.

It was smart for Telltale to lead with Bane’s appearance, because it set up a Chekhov’s gun of sorts. Knowing how things usually go between him and Batman makes you instantly wonder when the other Bat-boot is going to drop. And since you’re in the driver’s seat now, you wonder if you can prevent Bane from snapping Batman’s spine in half as per usual.

And then we get to meet the rest of the rogues gallery, and that sets up yet another thing: fun. Batman’s villains are easily some of the most entertaining things about his world, and though you don’t fight with them in Episode Two, the anticipation is there. They got some uneven treatment in this episode — for instance, I think they kind of phoned it in for Mr. Freeze — but hopefully further development will come down the line.

Aside from the Joker, you spend the most time with Harley Quinn. I’m cautiously optimistic about her; though it’s still hard for me to accept a grimdark version of her, we’re teased with just enough of her sordid past where it’s believable that she’s gone down this path. Unlike the homicidal mania we’ve seen in other versions of her, she’s painted as a sane person who’s been possibly forced to make insane choices for reasons we’re still not sure of. I’m interested in seeing where her character goes. 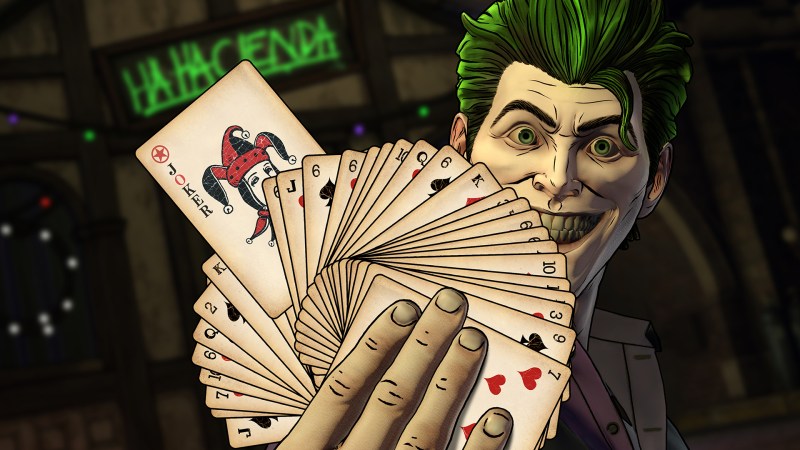 Though Episode Two cut down on the quicktime events in an enjoyable way, I was dismayed at the lack of general interaction. At times, it felt like I was just being ferried from location to location and talking to people, railroaded without any interaction with the environment. I didn’t encounter any puzzles, and I could not do any real investigation. In the few scenes where you do get a chance to examine your surroundings, it doesn’t really yield any useful information. In one, it just yanks on your heartstrings about Lucius Fox. In another, you’re told that you can’t investigate further because people might catch you snooping.

I would have liked Bruce to do more reconnaissance. The episode definitely depends on keeping you in the dark, ending on a cliffhanger that suggests you’ve embedded yourself in a situation far more convoluted than you previously suspected. However, sending Bruce on a mission to gather clues that could hint at horrors to come would have been a great, tense way to keep the players guessing and maybe plant a few red herrings.

From time to time, I found myself taken out of the story because it was hard to suspend my disbelief. For instance, why would Harley or any of the other villains welcome Bruce into their little evil fraternity based on Joker’s word? At this point, Joker’s not a threat and all of them seem to dismiss him as basically a space cadet. It’s not really clear at all, actually, why Joker’s even a part of the gang or how he contributes.

Character inconsistencies were also jarring. Harley makes a big deal out of how Bane is obsessed with loyalty, and then he turns around and abandons a comrade in battle. Maybe this could be explained away as Bane having a different definition of loyalty or as Harley sorely misunderstanding her strange bedfellows, but we’re also supposed to believe that underneath Harley’s face paint and murderous intent is a keen mind and sound logic.

Occasionally, characters would also suddenly turn on me when we were getting along just fine in a previous scene. When I prevented Mr. Freeze from murdering a foot soldier in cold blood, he got really upset with me and Bane told me to “watch my back.” This was right after ol’ Victor and I had spent some bonding time together. You know, we were just chillin’. I thought we were cool. But no, apparently I had to worry about him icing me. (I’m done now.) Aside from Mr. Freeze’s mercurial nature, it also makes no sense that he was so dead set on killing a random nobody. After all, everyone went out of their way to tell me that the only thing he cared about was his wife.

Bruce’s “test” that apparently wins Harley’s trust is also a little shaky, but I can mostly let that slide. What I can’t get over, though, is that the whole time he’s clearly wearing a fancy AirPod of some kind that lets him communicate with Alfred and Waller. And somehow nobody notices.

Episode Two was definitely an improvement on Episode One. Riddler’s unenviable task of being the sole villain is now spread over a whole cast of characters, and it will be interesting to see how Bruce can change the power dynamic.

Though the story and characters are more compelling in The Pact, it also sacrificed interactivity. Batman is all about cleverness, and so far, the game hasn’t allowed us very many instances to be clever. Fortunately, a strong cliffhanger and some interesting decisions has set up what might be interesting consequences. With each episode, John Doe edges ever closer to irredeemable insanity, and the question of whether or not you can save him remains an engaging one.

Batman: The Enemy Within Episode 2 comes out for PC, Mac, Xbox One, PlayStation 4, iOS, and Android on October 3. Telltale Games sent us a code for this review.