Team17 announced today that it’ll publish Pathea Games’s My Time at Portia, a colorful open-world role-playing game. This marks the publisher’s first partnership with a Chinese studio, and it follows an announcement earlier this year about the first time it signed on with a Brazilian developer. My Time at Portia is raising money on the crowdfunding platform Kickstarter, and it aims to be on Steam in Early Access in 2018. It will be available on PC and Mac to start, and Team17 will help bring the game to consoles later on.

Debbie Bestwick, Team17’s CEO, said that China has been on their radar for quite some time. It’s also turned into a country where their games do very well. This year, they’ve seen a big increase in revenue from China, and a lot of interest in their new release, Escapists 2. Twenty-five percent of Escapists 2 players are Chinese.

“We’ve had a huge fivefold increase in revenues in a year for that market,” said Bestwick in a phone call with GamesBeat. “Escapists 2 launched August 22 this year. On Steam it was the No. 1 best-selling new release in August, for the whole month. Looking at China, in terms of unit sales, China is our No. 1 market.”

Bestwick said the exciting indie scene in China intrigues her, and she and her team have been looking for studios to partner with. They knew of Pathea because of its first game, Planet Explorers, which released late last year on Steam, racking up 300,000 copies sold. A lot of her team had tried My Time at Portia’s demo, which is available to download for free and promises six to eight hours of gameplay — virtually unheard of for a demo.

“I don’t know the exact hours, but it’s somewhere between 30 and 40 when it launches in early access,” said Bestwick. “This is a very deep game. The production values are outstanding. If I wanted to get anything over to you, I would try to get across the quality of this studio. This is not a tiny little team that have never made a game before.”

Pathea is a 57-person studio based in Chongqing, China. It was founded in 2012, and it began working on My Time at Portia in 2015.

“From the start, we were influenced heavily by Hayao Miyazaki’s Future Boy Conan and Nausicaa and games like Dark Cloud 2, Harvest Moon, and Steambot Chronicles,” said Zifei Wu, Pathea’s president, in an email. “In the world of My Time at Portia, the world sadly came to an end in war and darkness over 330 years ago. Around 100 years ago, humans picked up the pieces and begin to rebuild society again.” 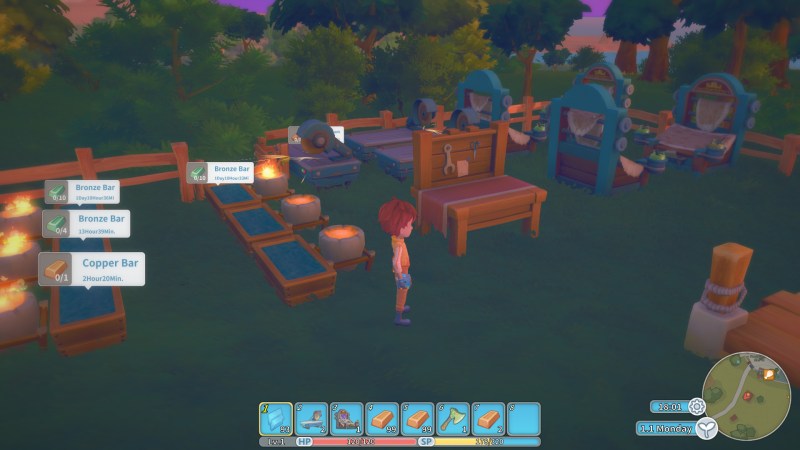 Wu said that they’re seeking to create a dynamic world where the player’s actions have an effect. The player can develop friendships or romances with non-playable characters, in addition to the farming, crafting, fighting, and fishing that’s expected in this kind of open-world game. NPCs can change, get new jobs, or leave town depending on the way the player acts.

Though Pathea’s previous title Planet Explorers sold a decent number of copies on Steam, Wu said that the biggest challenge for Chinese developers is reaching a Western audience. Partnering with Team17 could help alleviate this, as the publisher has experience with catering to global markets.

“The biggest problem though for indies in China is that the main market for indie games is the West, mostly on Steam, and most Chinese studios have no idea how to market to that market,” said Wu. “A lot of times, they completely ignore the rest of the players on Steam and only go for that Chinese segment. This can hurt the bottom line quite a bit.”

This year, North America will generate $27 billion in gaming revenue, according to industry analyst Newzoo. This is overshadowed by the Asia-Pacific region, which altogether will generate $51.2 billion. In that region, China is massive and will account for $27.5 billion of revenue on its own.

Still, the marketing problem is only part of the set of challenges facing indie devs in China. Wu said that funding is another issue, since investors often want huge returns that indie studios simply can’t deliver. There’s also brain drain, with many folks opting to work for huge companies like Tencent and NetEase, which are both enormous players and have been jostling at the top of the mobile charts.

“Indie companies can’t compete with their salaries; last year the average salary/bonus at Tencent was around $125,000, we can’t beat that,” said Wu. “Still, even with all these problems, the indie game scene has been booming the last couple of years in China. There are now conventions and game jams all the time. We think this is just the start and you’ll see more and bigger Chinese games on the horizon.”