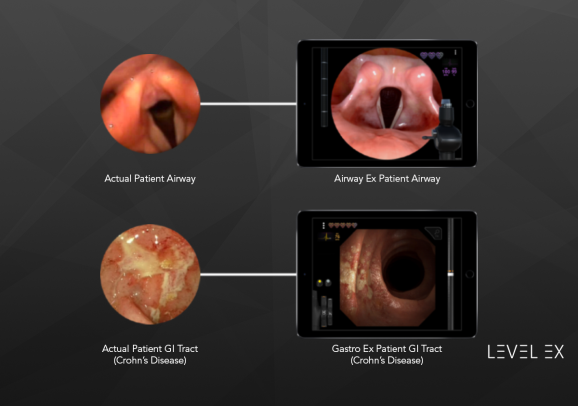 The updated look of Level Ex's app, Airway Ex. The virtual patients are compared to photographs of actual patients.

Developer Level Ex raised $11 million in a Series A round of financing to continue creating games that are aimed at replicating operating room scenarios. It previously created the virtual surgery training app Airway Ex, and with the funds it’s just raised, it will also start to experiment with augmented reality and virtual reality. The iOS version of Airway Ex already has some AR in it thanks to Apple’s ARKit.

“Our main focus with the Series A funding will be to expand our mobile apps as the mobile device is one of the most convenient and accessible training modalities that will ever be adopted by doctors,” said Sam Glassenberg, Level Ex’s CEO, in an email to GamesBeat. “Additionally, we plan to expand our AR and VR titles based on our market demand coming in from the medical device and pharma industry, and medical societies interested in these technologies as a new format for continuing medical education.”

Level Ex will be adding more cases to the Airway Ex app, and it will also start working on games that will cover other specialties, such as gastroenterology and cardiology. Glassenberg says that AR and VR offer a lot of exciting opportunities, with different use cases for people in the medical profession.

“Ultimately, I believe AR will be more useful in the operating room whereas VR will see more application and utility in medical training,” says Glassenberg. “With AR, a surgeon can project pre-op MRI scan data on top of a patient on the operating table — to effectively ‘see through’ the patient during surgery. Applications like this will aid surgeons to to be more accurate when operating on patients.”

VR, on the other hand, is immersive and can re-create the high-pressure environment of the operating room and help train professionals on a variety of situations.

Glassenberg says that they do a lot of user testing to make sure the controls in apps like Airway Ex are intuitive. They also consult medical advisors, who help ensure that the experience is still educational and informative for doctors. Level Ex’s developers also reference the sounds and appearance of operating rooms to mimic reality as closely as possible.

“Our game developers study in-depth the devices and clinical environments doctors practice within,” said Glassenberg. “The presentation of realistic patient anatomy, exact details of device specs, including camera visuals, and sounds of machines in the [operating room] bring a sense of familiarity and intuitiveness to the game. By the first few cases, doctors across the board get it, and shift into game-play mode, performing procedures and tackling the challenges being presented to them in the game.”

The feedback from medical professionals has so far been positive. Glassenberg says they’re seeing a session length of about 12 minutes on average. This is higher than other mobile games, which are reported to be about 7 minutes or so per session on average, according to TechCrunch.

“They are always amazed that they are able to see such a high level of realism from their mobile device,” said Glassenberg. “It’s exciting to see doctors jump when our virtual patients breathe, bleed, and cough based on their actions in the app. Not only do we hear such positive feedback when we talk to doctors, but we see it from our data. Doctors replay cases over and over to master a technique, earn a high score, or compete against a colleague.”