The Creative Assembly‘s new strategy game, Total War: Warhammer II, debuted last week as the latest release in a series that combines turn-based strategic war, real-time tactical combat, and the fantasy lore of Games Workshop’s Warhammer universe. It is a massive game that seeks to lure fans in from both the richly detailed Warhammer world and the ancient warfare of the Total War games.

The Warhammer theme was a risk for the Total War studio when it did Total War: Warhammer in 2016. It was the first time in 15 years that the franchise moved beyond a historical setting into a fictional universe. But the Sega-owned studio in the United Kingdom did its homework, and in the newest game, it came up with a campaign game that pits four Warhammer factions against each other in a race for a single-minded task: Conducting five rituals to gain control of the Great Vortex, a magical maelstrom at the center of the strategic map.

It turned out the bet was a good one. The first was the best-selling Total War game ever, and it topped more than 1.7 million units shipped, according to SteamSpy.

Above: A High Elven Mage in Warhammer II.

I come at this game like many do, as a big fan of the Total War historical games. Total War: Attila, which came out in 2015, commanded about 400 hours of my time, according to Steam. I loved the challenge of defending the crumbling Roman empire against the hordes of barbarians closing in from all directions in that game. I’ve put in about 42 hours into this game.

By contrast, I know very little about the Warhammer universe. I tried playing the first game, but I couldn’t get it to run on my computer. So I came into Warhammer II as a fresh fan might.

And I’m happy to report that the burden of learning the Warhammer lore is fairly light. In fact, it helped a lot that I was already familiar with how the Total War games worked on both a tactical and a strategic level. But I found the basic story and tutorial to easy enough to follow. It lured me in, and all I really had to understand was that I couldn’t let the races get to the finish line ahead of me. 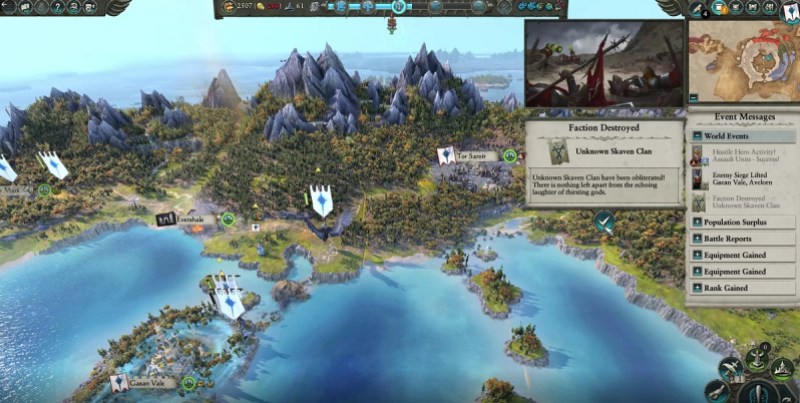 Above: Total War: Warhammer II’s action focuses on the continent around the Vortex.

Total War has always distinguished itself as a strategy game on its graphics. It has colorful terrain on its strategic maps, which you can view in 3D from any angle. And you can also dive into a given battle scene and fight a battle in full 3D. You can zoom in on a single soldier, or zoom out to see the panoramic battlefield. You can get both the rat’s eye view and the dragon’s eye view. Thousands of soldiers can fight in each battle, and the sound design is awesome as well with creaking catapults and ambient battle cries. The narration is great, and the whole effect is that the game brings the Warhammer universe to life.

You can jump right in

The game is kind of a sequel to the first one, but all you have to know here is that you have to beat the others by controlling the Vortex. You can ultimately connect the campaign map of Total War: Warhammer to that of Total War: Warhammer II. But that takes place later, after you fight the campaign in Warhammer II. The game has a lot of cinematics that tell you about each race and help you understand what is driving your faction. I chose the High Elves, and all I needed to know is that they hated the Dark Elves, the Skaven, the Lizardmen, and the forces of Chaos, which serve the role of wandering barbarians in this game.

You can play this Total War without knowing a thing about the Warhammer universe. Your faction has an adviser who can relate what is happening to you, and he will give you advice about what to do next. You simply build your cities, recruit your armies, and then move them around on the grand strategic map. When two opposing armies meet on the map, they go into a tactical battle, rendered in beautiful 3D. You fight it out, and the consequences are reflected in the armies on the strategic map. You can also choose to skip the battle and take a gamble on an automatically resolved battle.

As the High Elves, I started with a few cities, and I had to deal with an invasion by the Dark Elves. I had a few cities, but the Dark Elves had taken a couple of them from me. I had to take them back. I did so one battle at a time. The tutorial showed me how to deploy my troops and to think about tactics in the rock-paper-scissors gameplay. The cavalry could scatter the archers, but the spearmen could halt the cavalry. The woods are great for hiding ambushing troops, and high ground makes your archers into a force to be reckoned with. But once you get something like a dragon or an eagle in the picture, these troops could melt away in a state of panic.

Above: A cut scene from Total War: Warhammer II.

The Vortex gives the game a narrative and a deadline

The map has a central continent in the shape of a donut. In the middle is a sea, and in its center is the Great Vortex. The High Elves are in an excellent position to expand across the continent and control the whole donut. The other races start off in continents that are separated by a great ocean. That ocean is quite hard and time consuming to cross. But each race can’t be content to control one continent and leave the others be.

In Warhammer II, you can’t just conquer your neighbors and settle in for a long siege. You have to conquer enough territories and build the right structures to complete all five rituals that you must perform to control The Great Vortex. If you don’t do these rituals, the competing races will get to the task first, and that will be bad for you. The need to do those rituals prompted me to wage a civil war against my fellow High Elves allies. In any case, the designers force you to be aggressive and take risks. And this makes for a more dramatic story.

The battles are intense and unpredictable

If you have standard cavalry, spear, and archer units, you can turn them into a formidable veteran army over time. But at some point, you have to add special units, like Great Eagles or dragons. These can strike terror in the battlefield, forcing enemies to flee. But they’re not all powerful, as they’re a magnet for attackers, and you can find that the tide of battle changes when your great beasts get shot down. You have to pay close attention to each skirmish, as it isn’t easy to tell which units are strong. If you have a veteran unit with strong combat skills and a good position, you’ll do well against a weaker enemy.

I attacked The Phoenix Gate, the last stronghold of the Dark Elves, with a full 20-unit army with another 20-unit army as reinforcements. But I lost because the Dark Elves had a couple of dragons that terrified my troops. If you don’t have special units, you’ll be doomed to lose. That’s not something you can fix easily, and if you find yourself in a technological mismatch, you could easily lose a war.

The fun thing about Total War is that you can never really predict which way a battle is going to go, particularly when you have thousands of soldiers whose courage can turn the tide or fail at any given moment.

Above: The Great Vortex is the object of contention in Total War: Warhammer II.

The strategic game is a lot of fun

The strategic game is so long and fun by itself that I found myself automating the results for the tactical battles more often than I did in Total War: Attila. It’s a beautiful map, with colors allowing you to easily figure out what is going on. There are plenty of choke points on the peninsulas and mountain passes where you can lay ambushes or block a larger force from getting through. There are so many tasks to do on the strategic level — from building structures in your cities to recruiting armies — that you can spend most of your time performing strategic tasks. The tactical battles are almost ancillary.

As the head of the High Elves, you also have to worry about how much influence you have a court, as there are different factions vying for control. You need influence to recruit more leaders and heroes to your cause. 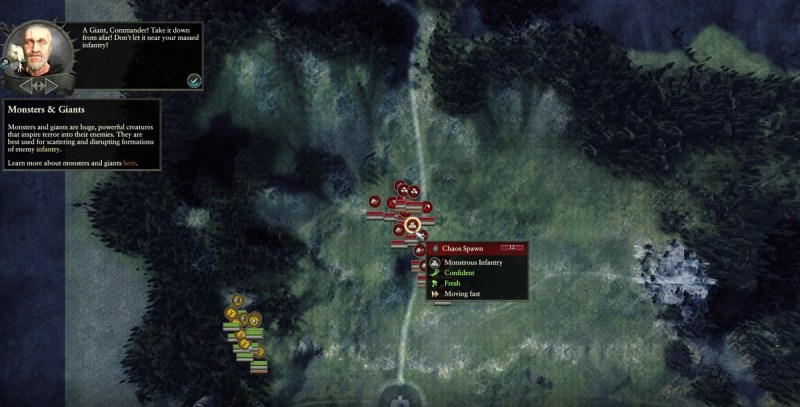 Above: Trying to hide in the woods. A top-down view of a battle.

The races are distinct and balanced

The Skaven, or rat people, are bad news because they’re vermin who can spread fast, and other factions may not realize this until it’s too late. Other factions simply see a ruin, but the Skaven could be building a massive rat city under that ruin. And when the opposing factions move onto the ruin, they may get a nasty surprise. They multiply in great numbers, and they have a lot of expendable foot soldiers. But they also have some awesome special units, like the Doom Wheel, a mechanical creation that is like a lawn mower that can chew up infantry. The Skaven also have poisons and other crazy weapons of war that can turn the battle around.

In the long run, money matters

You have to make sure that your empire is well run. If you forget to set up trade routes, it could doom you to a shoestring budget for expansion. But if you have a steady income, you’ll have a war chest to keep expanding and crushing the other enemies. I found that the best way to ensure economic health was to continue expanding cities, conquering more cities and occupying them rather than razing them, and exploring the world (especially the ocean) in search of treasure. You also generate money with every major quest that you complete in the campaign. That helped me stave off bankruptcy a few times. This side of the game means you have to run it a bit like Civilization, making sure that you don’t overbuild your armies and fortresses. 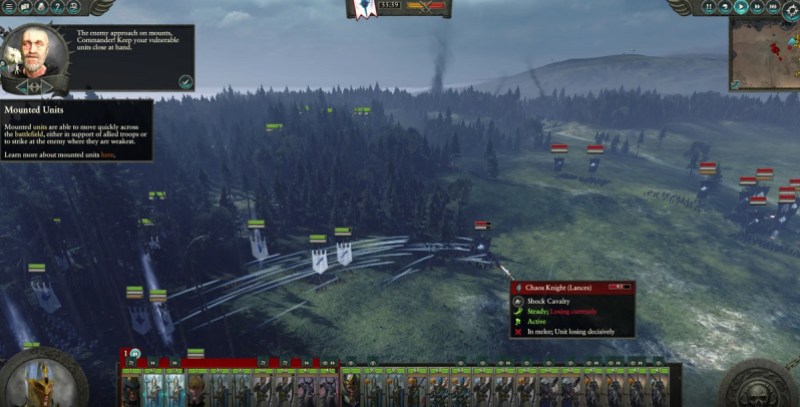 Above: The High Elves fight from the woods against the forces of Chaos.

I was going to have a hard time conquering all of my neighbors. But fortunately, I didn’t have to. I traded with some of the other High Elven factions, and I carried on diplomatic relations with them. I was eventually able to merge those factions into a larger confederation. They effectively joined me, and this allowed me to take over their armies and cities without a single battle.

On the other hand, if you allow your enemies to team up against you, you’ll find yourself cornered and checkmated. As you complete each task in the ritual list for control of the Great Vortex, you’ll also find that you have to fend off surprise invasions from the forces of Chaos.