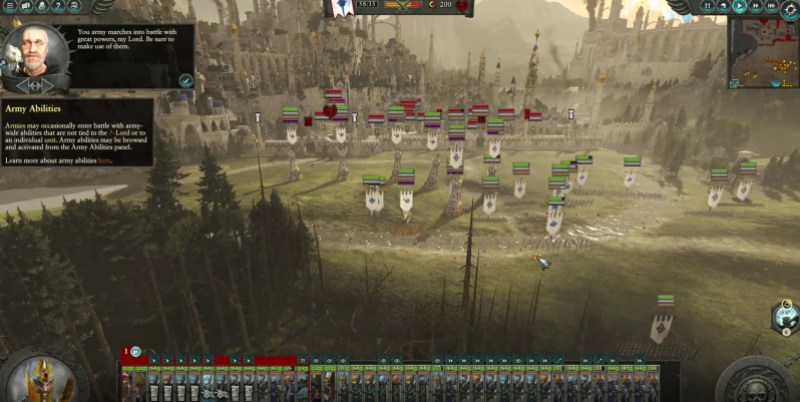 Above: The battles can be massive and the terrain majestic in Ttoal War: Warhammer II.

My PC is barely able to load the big tactical battles, and so I had to wait a while for the tactical screen to load. Fortunately, there are fast-forward buttons for the tactical screen as well as for the computer opponent’s turn. For the record, I used an Asus computer with 8 gigabytes of main memory, an Nvidia GeForce GTX 980 Ti graphics card, and an Intel Core i5-4590 processor running at 3.3 gigahertz. Not only did I have to wait for the battle to load, I also had to wait for the strategic map to load once the battle was over. My system is aging, but I worry that a lot of gamers are in the same boat.

Like in other Total War games, the battles can be repetitive. You’ll recognize that the woods, hills, and rivers tend to look the same, wherever you meet the enemy in battle. The cities are beautiful works of art, particularly in the High Elves region. But taking control of them can be a rote process of climbing the walls and controlling the victory point areas. Since the tactical battles were fairly predictable, I skipped many of them and automatically resolved them. I did this not only because of the long loading screens, but because it isn’t that fun to fight a battle when you’ve got an overwhelming advantage over the AI.

Above: One of multiple continents in Total War: Warhammer II.

OK, you have to know something about the Warhammer universe

It does pay to know that certain units are quite strong, and they can beat your highly trained elven archers easily. I made a lot of mistakes simply because I didn’t really know the pecking order in terms of the most powerful units. But it is a huge universe, with a lot of units and a lot of characters. It’s not for the feint of heart. And you have to invest some time into understanding the units and what they can do before you set them loose against the enemy. If you thought Total War was a challenge to learn, it’s an even bigger challenge to come up to speed on the special units of the Warhammer universe.

The tech and leadership tree is confusing

I could have used a better tutorial on the meaning of the technology tree that I was spending research points on, as well as the experience tree that I was climbing as each leader won a battle. Sometimes it was obvious, but at other times it was confusing. To me, that meant I could have used better description cards on how to figure out which leadership and tech traits were the most useful. 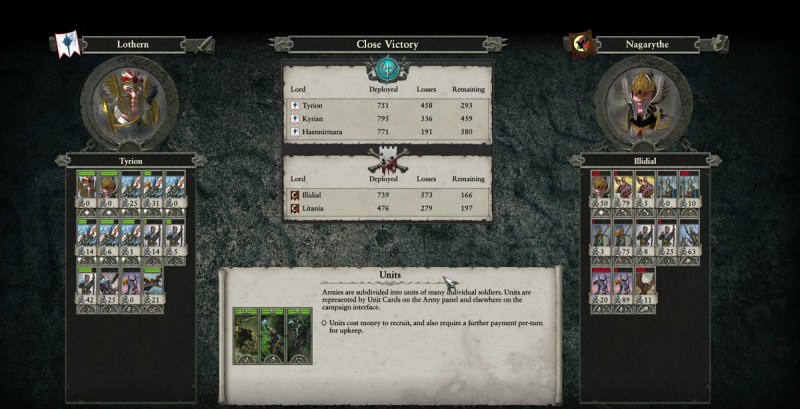 Above: A battle victory screen in Total War: Warhammer II.

Overall, Total War: Warhammer II is an exciting edition to the Total War series, and the Warhammer characters certainly add a lot of personality. They’re the sort of characters who generate more interest in the narrative and make you more interested in pursuing the rest of the story.

I certainly miss The Creative Assembly’s big history games. I sure hope The Creative Assembly goes back to building a giant history game. But the developers have set up another interesting scenario in Warhammer II, where each race has to move on a timetable to deal with The Vortex. It’s a compelling driver that forces you to engage with the larger map of the world. And that means you have to race to create a massive empire, being careful not to spend too much or too little.

I have a long way to go before I come to an end of multiple campaigns, but I am very impressed with the High Elves and the craftsmanship that went into the design of the strategic map, the narrative, the characters, and the campaigns. It’s a deep game that you could play for hundreds of hours.

Total War: Warhammer II is out on the PC. Sega sent us a Steam code for the purposes of this review.