Dual Universe is ambitious. It’s a massively multiplayer role-playing game that promises a single shared universe, one where potentially millions of people can gather to engineer ships, create organizations, develop miniature economies, and build virtual lives. After raising over $660,000 on the crowdfunding platform Kickstarter last year, it’s now entered a prealpha stage, and 2,500 of its backers can explore a preliminary version of the world.

The main difference between Dual Universe and other MMOs is that it’s a “single-shard” world. It runs on one server, so everyone is participating in the same virtual space at the same time. It’s a permanent world, and developer Novaquark said that it will be just one solar system. Then, as time goes on, the game studio plans on adding more and more to the universe.

Novaquark has been working on the underlying tech for over three years now, and it’s raised a total of $7.4 million. That’s counting the funds from its Kickstarter campaign as well as from investors, many of whom are familiar with Novaquark’s CEO, Jean-Christophe Baillie. He has a background in artificial intelligence and robotics, and he founded a robotics startup called Gostai in 2006.

A big draw for investors, Baillie says, is his vision of a single virtual world that acts as a platform rather than a game. He compares it to Facebook, where people can share content they’ve made or collaborate and learn from their peers. Based on the current rate of technological improvements, Baillie believes we’ll eventually reach a post-work society, and Dual Universe is something that will fulfill the need for entertainment. Just as Facebook is the primary gathering place for a lot of folks online, so will there be a virtual world that wins out over all the others.

“You only have one central place, and everybody gathers there,” said Baillie in a phone call with GamesBeat. “You know your friends are there. You can make a group there, but you’re still part of that central place. We believe there will be one big universe that exists.”

Within that universe, Novaquark’s aim is to give players the tools — such as the capability to mine, craft, build, and, if the player wants, to program their own ships — and then set them loose. Dual Universe does have trappings of a story, though Baillie is keeping the details close to the vest. All we know is that a neutron star somehow destroys Earth, forcing humans to evacuate and travel on space crafts called “ark ships” for 10,000 years to rebuild on an alien planet. Players disembark from the same ark ship at the beginning, and from then on, they can do pretty much whatever they want.

“You don’t have an explicit goal, or a story in the traditional way where there’s an end to it,” said Baillie. “There’s no content made by us. We don’t make cities or spaceships or anything. We’re bootstrapping this world at the beginning, but the idea is that all the content in the experience comes from the players.”

The players don’t create everything. Novaquark is forming planets and moons, deciding on their geological makeup and the kind of biomes that exist. In the future, the design team may also create animals and wildlife for players to interact with. Dual Universe lacks aliens (or at least so we’ve been told for now), only other players. The studio is creating a shell of a world, and what players do with it is up to them. If players want to explore the far reaches of the galaxy, they’ll have to mine resources to build ships. To make more in-game money, they can turn their ship’s design into a blueprint and sell it on the market. In order to build a city, many players will have to work together.

“Everything is editable. If you walk on a planet you can leave a hole in the ground, to the center of the planet if you want,” said Baillie. “It’s all about mining resources in the environment. But beyond that, you can also build cities, spaceships, orbital stations, basically build the content in the environment where you’re going to evolve together with all of the other players.”

What Dual Universe keeps coming back to are the players. Baillie says that the economy is one way that “good content” will proliferate in the world. For instance, if someone creates an amazing ship design, more people will likely buy it and it will gain a larger audience. If there’s a rampant problem with others acting as space pirates, players can organize and figure out how they want to deal with them.

“We’re trying to be extremely realistic,” Baillie said. “We hope to see some civilizations, basically, emerge inside this virtual world. In terms of inspiration, it’s a mix between Eve Online, for the emergent story content, and I would say Minecraft, or more recently there’s all sorts of games following this Minecraft style, for the 3D content capability. You can build things in the world and create stories and social structures.”

Players build communities … before the game 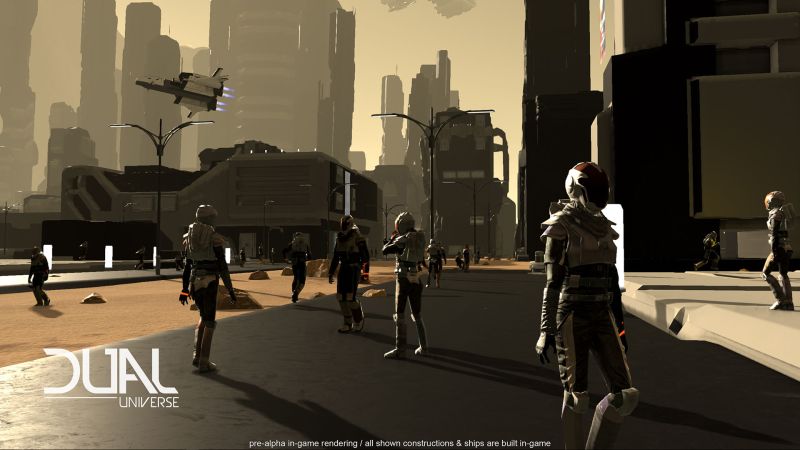 Baillie says that players have created more than 1,600 organizations and groups on the Dual Universe message board. One, the Terran Union, has even experienced a rise and fall in leadership. A player who goes by the handle FleetAdmiralCoke now runs the Terran Union after significant internal turmoil.

“Even though the game is only just now going into alpha, there’s already been a lot of politics and civilization building before it even began,” said FleetAdmiralCoke in an email. “The Terran Union was known for having a lot of internal issues, and being the largest organization so far, it made us an easy target for other organizations to point out our flaws. After we had a large group of players leave, and our former leader had stepped down, I was the only one left to pick us up and build ourselves back up.”

The Terran Union has 500 members, and it acts as governing body for its constituents. Players can opt to join its military as well as ministries — such as the Ministry of Commerce and the Ministry of Research and Development — as well as a council that convenes once a week to discuss the goings-on in Dual Universe. Its members pay taxes and agree to military conscription if the union deems it necessary.

“I see tremendous potential in the Terran Union, since this is a game that with proper organization and infrastructure, building anything is possible,” said FleetAdmiralCoke. “With our new staff, we have really high aspirations for what nations and civilizations can do in this game.”

Another player, who goes by Cybrex, leads an organization that might very well clash with the Terran Union at some later point in time. It’s called the Band of Outlaws, and it boasts 200 members. Though it also has structure, it’s not as rigid as the Terran Union. “Let’s act like grown men and women,” says the only rule listed on its site. “This also extends to how members are expected to act towards other organizations/communities. Be respectful, regardless of affiliations.”

“[Band of Outlaws] caters to those players who want to fulfill their fantasy of being the renegade,” said Cybrex in an email. “Playing the game their way with no pressure to do anything they don’t want to do. We want our members to enjoy their time in our community and the game above all else.”

Band of Outlaws already has a couple of missions already. Project Tortuga, for instance, is the plan to establish a free port that’s unregulated by any of the other organizations in Dual Universe.

“Among all the things this game has to offer, I finally have a game where I can live out my dream as a space-faring pirate, liberating cargo from those stingy traders,” said Cybrex. “It’s a game where you can be anything you want, and build anything you want all in the same persistent universe with everyone else. Who doesn’t want that?”

Both FleetAdmiralCoke and Cybrex say they’re fans of the space-building genre, and that other games haven’t provided as much freedom as they’ve always wanted. Dual Universe promises free rein in a way that appeals to them both.

“I’ve been an avid fan of space games for several years growing up with Wing Commander, Freespace, and my favorite, Eve Online,” said Cybrex. “As great as all of those games are to me, they all still missed out on truly letting myself live in a sci fi universe.” 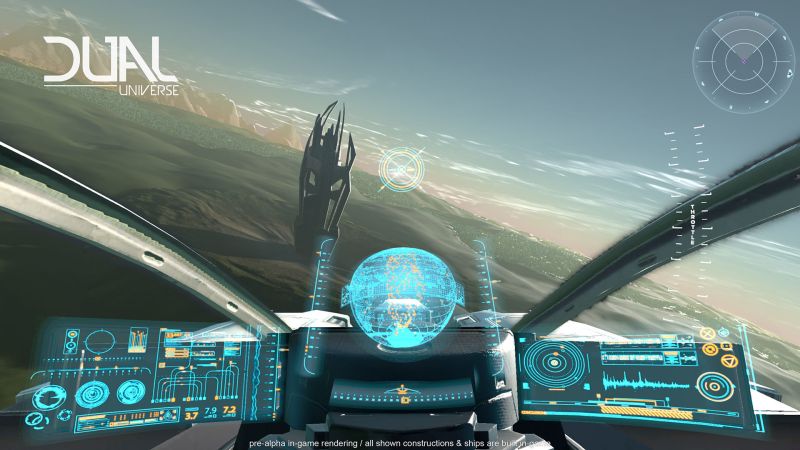 Of the 35 people on Novaquark’s team, three of them are community managers. Soon, Baillie says, they’ll be hiring two more as well. Transparency is a huge priority for them, especially since Dual Universe is such an ambitious project.

“We make a three-minute or four-minute video where we show what we have, good or not good, we show what we’ve done,” said Baillie. “The message is, if you didn’t see it in the [developer diary] videos, it’s not going to happen. We share our road map. We talk about what we hope to develop in the future. But we also are trying to be extremely clear about what we have today. That’s what we can do.”

By communicating clearly with the fans, Novaquark is hoping to manage expectations and hype as much as possible, and to also get feedback. Both FleetAdmiralCoke and Cybrex voiced positive opinions about its efforts.

“They’re incredibly transparent, and they do listen to the community, and I can tell you that it makes a huge difference when developers do those things,” said FleetAdmiralCoke. “Through the [developer diaries] and regular forum posts they’ve laid out their vision for the game, and they have done their best to listen to everyone’s feedback on what could make the game better, and so far it’s working really well.”

Another reason why community management is so important is to combat player toxicity. Baillie says that if people report offensive behavior, they’ll step in and censure where needed. They also have other features in the game that are designed to prevent toxic behavior. For instance, Dual Universe will be subscription based, about $14 per month, which Baillie is hoping will filter out people who aren’t serious about playing the game. There are also skills in the game, such as the ability to create a “protection bubble” that will help players defend themselves and their belongings. And, of course, Baillie says that they’re hoping players will self-police and band together against trolls or other malicious actors.

“It’s true that it’s a challenging issue, because we’re doing something nobody else has done before, not on this scale,” said Baillie. “If you think about it, any toxic activity will tend to accumulate, because the world is permanent. It doesn’t get reset. This is something we’ll observe. We’ll see what happens. We have all these mechanisms, and we might add more of them.”