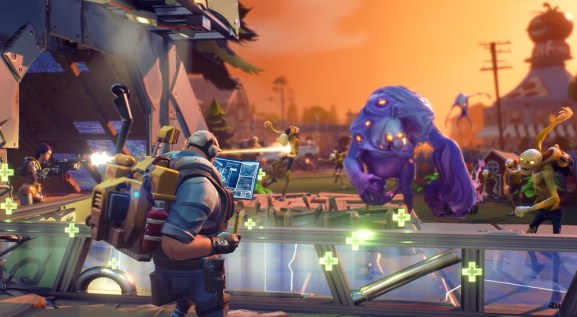 Fortnite will bring you numerous kinds of zombie enemies.

The big rumor last week was that Tencent, the biggest game company in the world, had bought a 5 percent stake in Bluehole Studio, the South Korean developer behind one of the most talked-about games of 2017: PlayerUnknown’s Battlegrounds. It hadn’t, though the talks between the Chinese PC and mobile gaming behemoth and Bluehole are ongoing.

PlayerUnknown’s Battlegrounds has become so huge that Bluehole has created a subsidiary to manage the online multiplayer shooter. This is important, because so many people are playing that it’s making it hard to keep the servers up. Bluehole addressed this today, and we’ll see if things improve or not.

Meanwhile, Fortnite said that it had 7 million players between its standard and free-to-play Battle Royale modes … on consoles. This is significant, because PlayerUnknown’s Battlegrounds isn’t on the Xbox One or PlayStation 4 yet. It’s still on PC. And Fortnite’s take on the last-player-standing model is free.

It’s amazing that we’re seeing these blockbuster numbers for two base games that are still in Early Access development — people pay to play these ($30 for PUBG, $40 for Fortnite) before they officially release, dealing with bugs and changes and providing feedback (and money) to the developers.

As for me, the pull of Divinity: Original Sin II continues to dominate my PC gaming time. It’s one of the best role-playing games I’ve ever played. It’s also huge, full of side-quests. At this rate, I’ll finish in … March?

Dual Universe is ambitious. It’s a massively multiplayer role-playing game that promises a single shared universe, one where potentially millions of people can gather to engineer ships, create organizations, develop miniature economies, and build virtual lives. After raising over $660,000 on the crowdfunding platform Kickstarter last year, it’s now entered a prealpha stage, and 2,500 […]

EXCLUSIVE: Team17 announced today that it’ll publish Pathea Games’s My Time at Portia, a colorful open-world role-playing game. This marks the publisher’s first partnership with a Chinese studio, and it follows an announcement earlier this year about the first time it signed on with a Brazilian developer. My Time at Portia is raising money on the […]

Amazon is updating its Lumberyard tools for game developers. The engine is adding dozens of new features to improve animations, nonphotorealistic visuals, and more. Lumberyard is Amazon’s biggest gaming project. The company has some internal development studios, but it is putting a lot of investment in building making a tool for others to use. The company […]

Tencent has not invested in Bluehole Studio, the company that makes PlayerUnknown’s Battlegrounds. News reports out of South Korea yesterday claimed that Tencent had acquired a 5 percent stake in the PUBG developer, but Bluehole confirmed to GamesBeat that those reports are false. This does not mean that Tencent — a Chinese internet behemoth that […]

PlayerUnknown’s Battlegrounds is getting its own subsidiary from Bluehole

Bluehole, the studio behind the massive battle royale shooter hit PlayerUnknown’s Battlegrounds, announced today that it is creating a subsidiary, PUBG Corp., to handle the development and business growth of the game. PUBG has been available on PC in Early Access since March. It has already sold more than 13 million copies, according to Bluehole. The developer […]

Think “high-performance athlete” and a fairly typical ideal probably springs to mind. The classic media representation of an elite athlete embodies physical prowess built on a foundation of continual conditioning and fitness. While it puts some emphasis on the mental aspects of athleticism, its main focus is all about the body. Compare that to the […]

Game developers working with Unreal Engine are about to reap the benefits of Epic Games’ recent adventure into developing a battle royale game. (via Gamasutra)

20 years ago today, Fallout set the world on fire

Dota 2 is celebrating its biggest-ever update and what is essentially a brand new game. Well, brand new games need patches, and there’s bound to be a whole bunch of them. Below we’ve gathered some highlights from the last few to be deployed, along with links to where you can find out more. (via PC GamesN)

Earlier this week, Elite: Dangerous’ players found themselves struggling with a moral quandary. They’d figured out how to kill aliens, but they weren’t sure if they should. Now, though, they’ve been hit with a curve ball: the aliens are growing wise to human weapons and tactics. (via Kotaku)