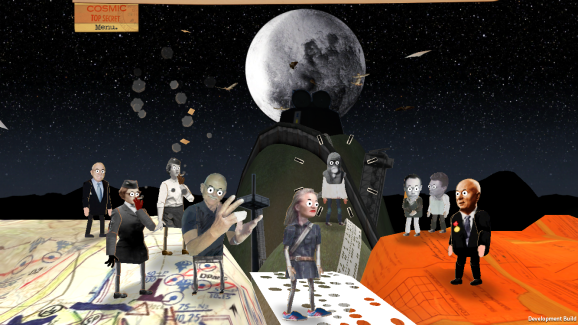 Cosmic Top Secret is an autobiographical mobile game about the Cold War, but it’s far from a staid affair. Archival photos, film clips, and documents are nestled in an adventure game with tons of charming whimsy and personality. It’s developed in partnership between Klassefilm and Those Eyes, and it will be out in 2018 for Apple and Android devices and possibly for PC and Mac. It’s also one of the nominees at this year’s IndieCade Festival, an international games event that’s been showcasing independent titles since 2005.

When Trine Laier, a director at Those Eyes, found out her dad might have done ultra classified work for the Danish Security and Intelligence Service, she decided to investigate. She turned what she found first into a thesis film for the National Film School of Denmark, and then into a game.

The main character is a fictionalized version of Laier. She’s referred to only as “T” and she appears as a cardboard cutout with googly eyes. When T moves around, she turns into a crumpled paper ball and rolls to and fro. The entire world has a surreal mixed-media aesthetic, looking like a collage of torn cardboard, scribbles, animated stickers, and cartoony colors. While T chats with her father and tries to find out more about his secret history, she also relates historical anecdotes and helps a mysterious figure collect pieces of some kind of high-tech apparatus.

The visual style came from playing around with pictures and videos of real people, from Laier’s family and family’s friends as well as historical artifacts. The paper cutout element seems to echo the fact that T is diving into documents, searching for the truth.

“[The visual style] stems from real archived material, photographs of real people,” said Laier in an interview with GamesBeat. “That connected with some drawn images, and set in a fictive setting some of the way, it came up like that.”

Cosmic Top Secret has a sense of humor and seems to delight in satirizing historical figures. Laier says that it’s the “fun parts of Cold War history.”

“For instance, there’s one story about Khrushchev, the former leader of the Soviet Union,” said Laier. “He went to visit Copenhagen in 1956. And then the Danish Intelligence installed pipes in his hotel room to see if his poop — see what his condition was like. They took it out and brought it to a laboratory and discovered that he was just doing fine. Little stories like that.” Above: T runs a race course through the forest and learns how to throw hand grenades.

Despite the cheeky attitude, it also explores themes like identity and familial relationships. Early on, we learn that T also has a secret she’d like to confess to her father, but even though they seem to have a close, warm relationship, they don’t seem to have a good way to simply confide in each other.

Lise Saxtrup, founder of Klassefilm and Cosmic Top Secret’s producer, says that telling Laier’s story as a game seemed completely natural. Saxtrup and Laier both have backgrounds in film, but they’re also both fans of games.

“To us, this universe invites for a game,” said Saxtrup in an email. “Even before the story fell into place, the universe contained huge potential for classical as well as experimental game design. The story could probably also have been told in a film, but it would have been a completely different story, where you don’t do the story but are having it told to you.”

Saxtrup and Laier did a lot of research for the game, and sometimes they discovered that reality was in fact stranger than fiction — for instance, at one point T discovers that her mother taught Judo to the queen of Denmark. Saxtrup says that a lot of it didn’t make the cut, and while designing the game, they would pick and choose content based on the kinds of mechanics they wanted to include.

“As mechanics developed, they were also part of editing the story, as we went with content that supported our mechanics,” said Saxtrup. “In this way, the development is like creating two legs for a body, enabling it to walk.”
Last year, Cosmic Top Secret won the award for Most Amazing Game at the A Maze Festival in Berlin. What seems to appeal to people isn’t just its charming sense of style, but also the personal story it tells.
“We aim at having the game inviting for a reflection on your own relations, for example in your family,” said Saxtrup.