According to tales of the Old West, a whole host of unfortunate souls have been known to make deals with the Devil. And that’s exactly what the nameless protagonist does in Where the Water Tastes Like Wine. It’s been nearly two years since Dim Bulb Games and Serenity Forge released an announcement trailer for their stylish narrative-driven exploration of Americana, and it’s finally getting ready for its debut. It will release in early 2018 for PC and Mac on Steam and then roll out to consoles later down the line.

Where the Water Tastes Like Wine is an open-world adventure in a magic realist version of the U.S. where nothing is more important than stories and the people who tell them. There’s something incredibly mythic about it right from the start.

When I played a demo at the IndieCade Festival (an annual event that celebrates independent games), the opening scene was cozily familiar: the main character in a seedy saloon, playing hand after hand of poker until all that’s left is a heads-up match against a shadowy stranger. Of course, the stranger goes all in, and of course, I do anything I can to match it. And, of course, he turns out to be the Devil, and now, I’m cursed to walk the lands, gathering stories for him.

Creator Johnnemann Nordhagen found inspiration in his own travels. He was one of the cofounders of Fullbright, and after the release of the indie hit Gone Home, he left to found Dim Bulb. In the interim, he also decided to do a bit of wandering.

“After I finished working on my last game, I went traveling a lot,” said Nordhagen in an interview with GamesBeat. “I was traveling all over the world, trying to do that mostly by train and boat. I was avoiding planes because I like knowing when I’ve traveled somewhere, right? Planes are kind of like teleporting.”

During his voyages, Nordhagen met a lot of folks and exchanged a lot of stories. He incorporated the idea of exploring this kind of nomadic storytelling with his love of bluegrass, jazz, folk, and blues music — and Where the Water Tastes Like Wine emerged.

“I wanted to bring the world you hear about in those songs — selling your soul to the Devil at the crossroads, the lonely gambler looking for one last score, that sort of thing,” said Nordhagen. “I wanted to create that world. The era of U.S. history when people were doing a lot of traveling on trains and where a lot of this folklore comes from is the 1930s, the Depression, the hobo heyday, so that’s the time period I chose, and the game grew from there.” 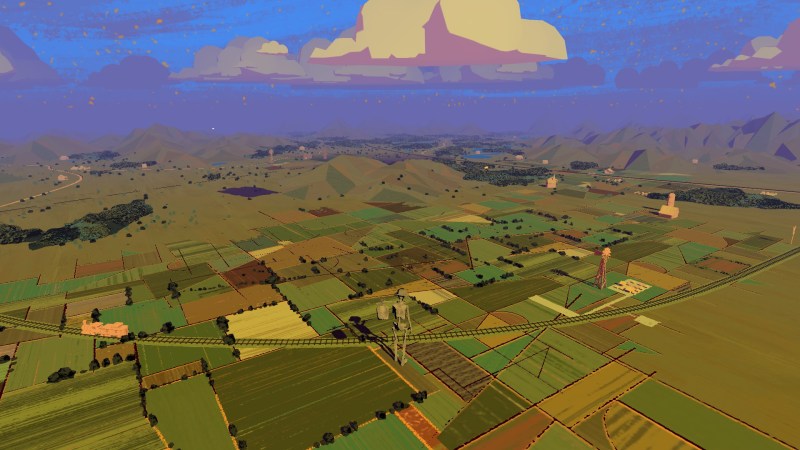 Above: The nameless character, looming larger than life over the U.S. as they search for stories.

Stories are the basis for everything in Where the Water Tastes Like Wine. You have to gather true stories in order to set yourself free from the Devil. You also use stories as currency when you meet other characters around the campfire. The more you tell your stories, the more likely they’ll roll around the country like tumbleweeds, gathering size and legendary feats until they return to you, bigger and bolder and weirder than ever.

“They get embellished as people tell them and add their own little bits to them,” said Nordhagen. “That’s how you level up your collection of tools, by telling [your stories] and watching them grow bigger.”

There are a lot of little bits of strangeness in the game. For instance, you roam a map of the U.S. as a bare skeleton with a rucksack and a jaunty hat. It’s ambiguous, Nordhagen says, if that’s metaphorical or literal. Other people react to you like you’re completely normal and not at all as though you’re a walking, talking, storytelling skeleton. Some of the stories you encounter are odd snippets — like when you find a boy hiding in a bag in the woods. It turns out that his father is leaving home, and the boy is hoping he won’t notice if he hides in his father’s luggage and runs away with him.

The title’s unique style and the way it deals with narrative have grabbed people’s attention. It’s already garnered some love at festivals like SXSW, where it was a 2017 Gamer’s Voice Award nominee, and it’s a nominee at this year’s IndieCade Festival as well.

And because stories are so central to the game, Dim Bulb has taken care to weave in iconic tall tales as well as invent some of its own.

“The little stories, the little adventures you have, they’re either made up by the writers, or they’re based on American folklore,” said Nordhagen. “You can meet Paul Bunyan, Pecos Bill, the Headless Horseman, that kind of thing. But the characters you meet are actually based on American history.”

Speaking of writers, Where the Water Tastes Like Wine has a fantastic roster contributing to its anthology of Americana. It features people like Anne Toole, a video game writer for CD Projekt Red’s The Witcher; Austin Walker, the editor-in-chief of the gaming news site Waypoint; Leigh Alexander, who wrote the upcoming Reigns: Her Majesty from Nerial; Jolie Menzel, a narrative designer and writer for Ubisoft’s South Park: The Fractured But Whole; and more.

The tales in the game aren’t just born from imagination, though. The stories — the true and important ones, as the game reminds us — are inspired by real experiences.

“They’re not based on specific people, but you can meet a coal miner or a hobo kid who was kicked out of his home during the Great Depression,” said Nordhagen. “You can meet a Navajo woman who was forcibly relocated in the Long Walk. All these different characters come from different aspects of American history that we don’t often talk about or necessarily learn about at school.”