When Microsoft announced its Windows Mixed Reality platform last week, it talked about how the combination of virtual reality and augmented reality (which Microsoft calls mixed reality) would create a new era in computing.

Alex Kipman, technical fellow at Microsoft and the researcher behind Microsoft’s HoloLens AR headset, went on stage at an event in San Francisco and answered questions from a group of journalists. He did his entire presentation while wearing a new Samsung HMD Odyssey mixed reality headset, and he predicted that communications would be the killer app for mixed reality.

That’s why Microsoft acquired AltspaceVR, a social networking space in VR. AltspaceVR and Microsoft will try to figure out ways that people can meet each other in VR or AR. Developers will be able to make apps on Windows that can run on VR or AR headsets, and consumers will be able to use Windows for VR or AR apps, starting on October 17. There are plenty of other apps, as well, from Microsoft’s own Halo Recruit VR demo to the whole SteamVR library (coming later this year).

Kipman said, “We are standing at the threshold of the next revolution in computing — a revolution where computers empower us to expand our capabilities and transcend time, space, and devices, a revolution where we immerse ourselves in virtual worlds of our choosing, and we accomplish seemingly impossible things while making lasting memories with the people we love.”

After his presentation, Kipman took a bunch of questions. Here’s an edited transcript of the conversation. 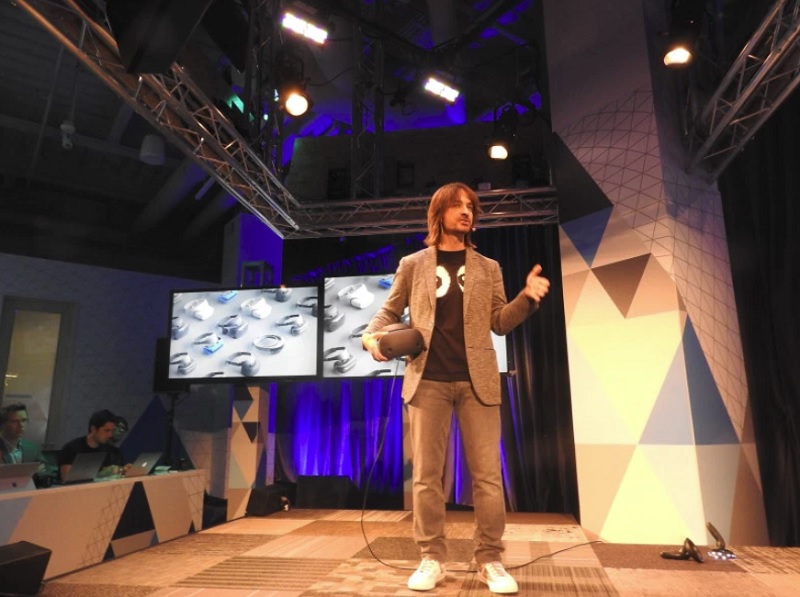 Above: Alex Kipman thinks communications will never be the same after mixed reality takes off.

Question: Any plans to make the Cliff House social, as in bringing friends into your personal home?

Alex Kipman: Absolutely. Maybe not in this current release of Windows, but Windows has a path of releases ahead of us and making the Cliff House social is part of our plan.

Question: Should we expect to hear anything about Xbox and VR soon?

What you’ve seen us do is leverage this experience on PC first, where the cords are already in the right place, where the horsepower of the machines from the GPU and the CPU are in the right place. Over time, absolutely, we’ll have it in Xbox, but we’re not going to announce anything for that space today.

Question: You described Windows Mixed Reality as the first spatial operating system. Do you want to differentiate it from Windows 10 on its own, or do you still consider those the same thing? It seems like the way you’re presenting it is as its own operating system outside Windows 10. 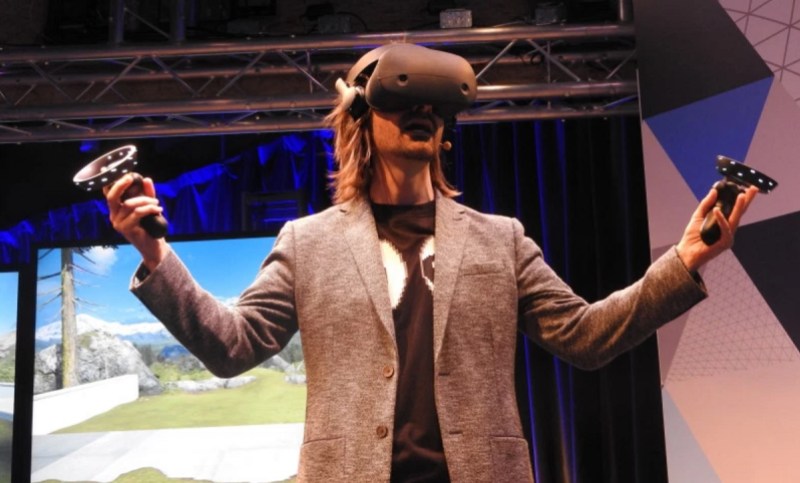 Kipman: I’m glad you asked that question, because I’m going to disambiguate it. Absolutely all Windows 10. There is one operating system. It’s Windows 10 and we love it.

What I do want to differentiate is how that one operating system evolves into the future. As a matter of fact, in all your machines, on October 17, you’re going to download this version of the OS. You’ll have the same beautiful desktop, and when you plug in the headset there will be nothing to install. You’ll just go through the headset setup, download some updates perhaps, and you’re off to the races. The idea of being the first spatial operating system is just a natural evolution of the operating system to adhere to this immersive world that is mixed reality. So we’re absolutely not trying to differentiate from Windows 10. It is Windows 10.

Question: By October 17, how many mixed reality titles do you expect to be available? Is there anything you’d regard as a killer app?

Kipman: For me the killer app for mixed reality is Altspace communication, the communication fabric of being able to be with all the people you love in a family setting. Or as an employer, to be able to have my people be around the world in a physically present way without actually having to be physically present. The ability this provides—I mean, why are you here today? Think about that. You all have, I hope, put a premium on face-to-face interaction, reading each other’s facial expressions. There’s more to this experience than doing it over Skype, text messages, email.

We believe in the power of being present. The little con is that you have to be in the same place at the same time. Mixed reality gives you the superpower to transcend time and space, and now all of a sudden, in the very near future, you’ll be able to have communication that’s this immersive, this present, but maybe I’m standing on the surface of Mars. That’s the killer experience. It’s communication. You see that our acquisition today is part of the strategy of making sure that we start building a communication fabric created for mixed reality.

As far as the first half of your question, with how many titles are available in the store—it’s a store. More titles come in all the time. Out of the gate you’re getting more than 20,000 applications in that store. You saw that whole wall of immersive virtual reality experience, and that was a fraction of the titles. If I had to quote a number it would be 20,000, but it’s the Microsoft store. More titles are coming in all the time.

Question: Could you give a few more details on the AltspaceVR acquisition? How many of those team members are going to join Microsoft? Are you planning to rebrand that? Can you say anything about a purchase price?

Kipman: Most of those things we don’t talk about. My key objective with any acquisition is making sure that we stay true to the reason we bought them. To great extent it’s a partnership with people who’ve been pioneers in social mixed reality. The point of joining forces is to learn from each other and share the DNA that everyone has.

From that perspective, the majority of the team did come over as part of the acquisition. I don’t have anything else to talk about today in terms of branding, future direction, blah blah blah. The objective with the acquisition is to get the teams together and start creating, together, the mixed reality future centered on communication.

Question: Is the idea to build out AltspaceVR to keep what’s there alive, or do you want to start over and build a new social experience?

To the question of whether people will be able to visit your Cliff House—over time, we’ll evolve the experiences. One can imagine that in the world of tomorrow, the minute you join any of these immersive experiences you’re going to be able to be with the people you love, the people you work with, and the people you’re trying to communicate with. Altspace is a very good foundation for that world of the future. But again, I have nothing more than to be excited about the fact that we acquired them. We love the community of Altspace and Altspace is going nowhere. 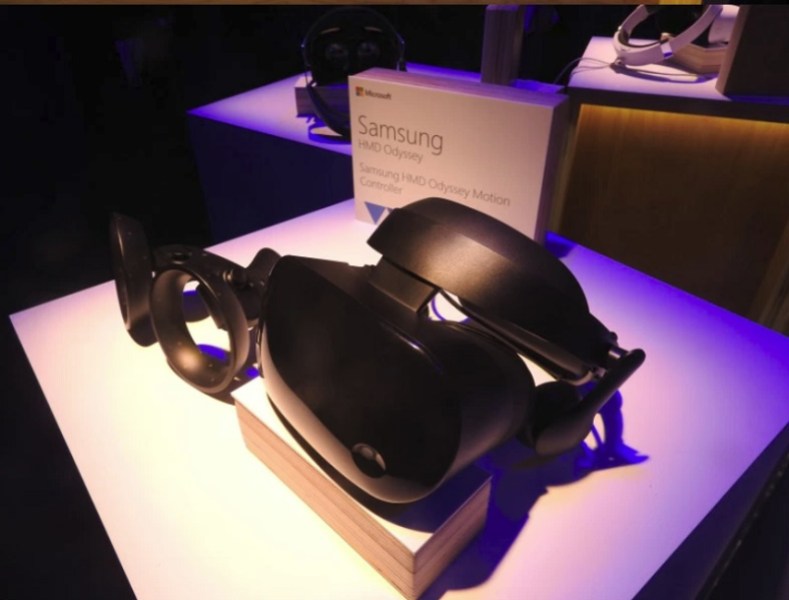 Above: The Samsung HMD Odyssey headset sells for $400.

Question: We saw you interacting with a lot of legacy apps in 2D. What’s the timetable for some of those legacy apps evolving to a mixed reality interface?

Kipman: I think you’re going to see that it’s mixed. To a great extent, there’s a tremendous amount of value in our entire portfolio, in the Windows universe of apps. Part of my objective as a platform holder is to reduce friction for developers, so they can target a single unified platform that goes across an Xbox, a PC, a HoloLens, and our mixed reality capable devices.

Much like anything else on our universal Windows platform, developers are customizing for the device end point. In the same way you can get Spotify on the desktop and Spotify on the Xbox, the apps are a little bit different. One needs to be controlled with a game pad from about 10 feet away, the other needs to be controlled with a mouse from about two feet away. The folks at Spotify adjust for the end point within a single application that morphs in terms of both input and output to match that end point. It’s easy to imagine Spotify tomorrow doing the same thing, except within the context of mixed reality. Break the bezel and put music all around me, something like that.

The example I showed you with the picture of the little butterfly app, it’s an example of that. That’s a universal Windows application that had no bezel, where content is just popping out. You’re going to see that content start showing up in Windows Mixed Reality, and one expects that, over time, the majority of applications are going to be intelligent enough to say, “When I’m doing these types of things I’ll optimize for motion controllers. When I’m doing this I’ll customize more to not need a bezel.”