The conversation about the Switch’s battery life was a lot louder before the system launched in March. When Nintendo announced that the Switch would typically last 2.5-to-6 hours on one battery charge, people freaked out because that seemed short. Now that everyone has a Switch, you don’t really read or hear many people criticizing the system’s power efficiency. It turns out that even 2.5 hours for something like The Legend of Zelda: Breath of the Wild is a lot in more circumstances. But what happens when it is not enough? You do what gamers have always done for their portable systems: get a Nyko Power Pak. 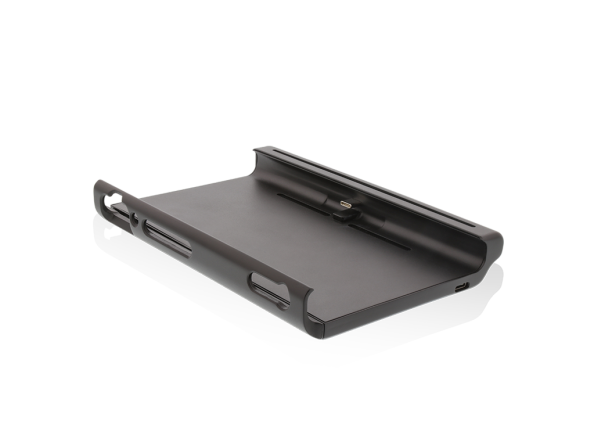 Above: The Power Pak looks like it has a small profile, but it will add some odd grooves to your Switch.

Nyko, one of gaming’s long-time peripheral makers, has launched its Power Pak for Nintendo Switch product for $40. It’s a plastic shell that wraps around the Switch and adds a 5,000 mAh battery to the system. Nyko claims it “provides up to double the battery life” of Nintendo’s hybrid handheld/home console. At $40, this is an alternative to a high-voltage USB-C battery pack. Cheaper battery packs don’t have the juice required to actually replenish the Switch.

I’ve spent a lot of time using the Nyko Power Pak for Nintendo Switch, and it has some quirks that you should know about before running out to get it. But it also works as advertised. I clocked in over 9 hours of game time without charging on the two instances where I was keeping track. In general use, it gets the job done without a lot of problems. A big button on the back activates the Power Pak. If you start getting down to around 75 percent, you can hit that button and the Switch will start charging. Four LED lights on the back tell you how much power the peripheral has, and it will automatically stop charging after one of the lights goes out.

This is ideal for travel, and I would almost think it would work best if you kept the Power Pak in your laptop bag or something. That’s because you won’t want the extended battery on the Switch at all times. You cannot dock the system with the Power Pak equipped. But an even bigger problem is that the external battery makes the Switch a lot more uncomfortable to hold.

With the Power Pak on, the Switch is heavier and doesn’t fit your hands as well. This will cause a lot of discomfort if you try holding the system while laying down. I found my hands getting fatigued in situations like that. The battery gets in the way of your hands and keeps them from gripping the Joycon controllers and the console all at once. Instead, you have to pinch each Joycon, and that can hurt — especially with the added weight.

But this is less of a problem when you’re sitting up in a chair, in a car, or on a flight. The Switch rests a little easier in these circumstances, and I didn’t have any problem playing for hours. I still don’t think most people will need something like this, but if you find yourself running out of battery frequently, then I like this option way better than dragging a cable from a battery pack and into the Switch.