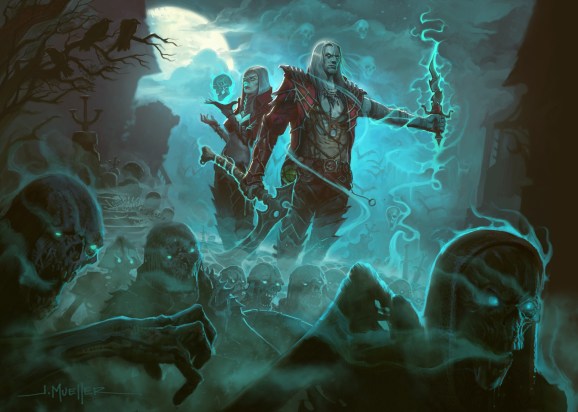 Concept art for the Necromancer in Diablo III

The Necromancer was a childhood favorite of mine. Childhood might not be a fair term; I wasn’t a child when I first played Diablo II, but I wasn’t exactly an adult either. I remember my brother and I installed Diablo II and we both picked the Necromancer, and we both ran around exploding corpses and reviving monsters for hours. That was some of the most fun I’ve ever had gaming. I’ve spent a lot of time in the Diablo franchise as a player and now a designer, years at this point, and the D2 Necromancer is definitely one of the most memorable parts of that. So when we finally got together and decided we were officially going to make the Necromancer for Diablo III, I was like: “Hell yeah, let’s do it!” It was a big honor. But it was also a big challenge to bring this character back for a new generation by adding him to what is a completely different game.

The first and most obvious task we had before us was differentiating the Necromancer from the Witch Doctor. Witch Doctor had been the de facto “pet class” of Diablo III since the game’s original launch. Any character that relies on summons is going to exist in the same gameplay space, so it was very easy to think that the only thing different about the Necromancer and the Witch Doctor was the packaging: the latter being a voodoo jungle doctor guy instead of a commander of the dead, summoning hyperactive little fetishes instead of skeletons and a gargantuan zombie instead of the Necromancer’s trademark golems. But clearly they’re different, so we had to ask ourselves: “How do we make them feel different?” 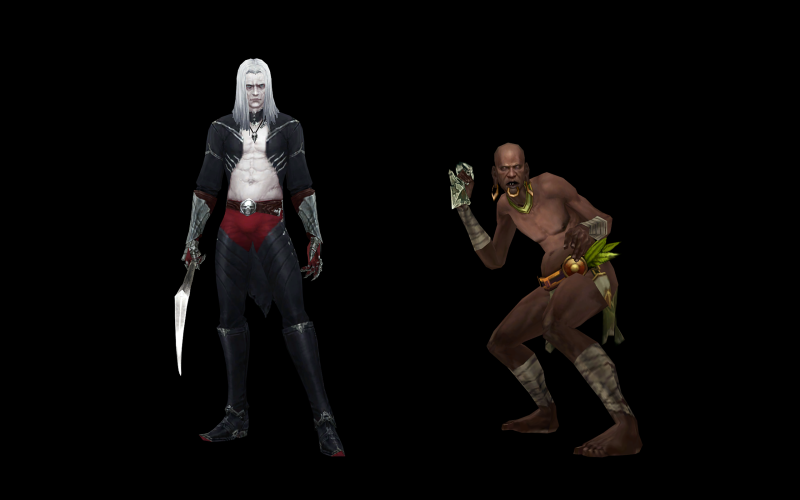 Above: The Necromancer and the Witch Doctor, theoretically similar classes.

In with the old

Looking at the Witch Doctor, we saw that the hero’s entire kit is wrapped up in undirected damage. Your pets are undirected, your spells spread and bounce around dealing ambient damage, you kind of just do things and then watch everything die. The fantasy of the Necromancer is one in which you are commanding armies of undead. We decided to really hone in on the commander aspect of the character. He’d have pets in a similar way to the Witch Doctor, but we wanted players to feel much more connected to those pets on a deliberate, tactical level. There’s where the ability name “Command Skeletons” came from: we wanted you to be able to have your posse of skeleton bros and then point at one monster and say, “I want that guy to die. (That guy specifically, screw him in particular.)” Above: “CANNONBALL!” The Necromancer’s golem has some very directly targeted abilities

Making the Necromancer distinct from the Witch Doctor wasn’t our only challenge. As is often the case when you’re trying to adapt — and thus modernize — a classic that a lot of people (myself included) played and loved, we ran up against a lot of nostalgia for the Diablo II Necromancer. A big holdover players originally had in testing was they really wanted to summon all of their skeletons individually from enemy corpses, one by one, which is how it worked in D2. We’d designed Command Skeletons in DIII to have a group of skeletons automatically pop out of the ground when you equipped the ability, and some people felt that killed part of the summoner-undead commander fantasy.

The problem was we really wanted the specific button press to be meaningful for Command Skeletons — the keystroke you make when selecting a target and telling your minions to kill that guy. That monster. If you had to also press a button seven times to summon seven skeletons, that would make the ability more confusing, and the command to go kill your enemy less satisfying. I think some people had forgotten about the  annoying moments  when it came to summoning D2 skeletons: when you would die and lose all your skeletons especially, and then not have any to help you kill more bad guys, which meant you couldn’t get any more skeletons, and…you can probably see where this is going.

Some things couldn’t be brought back from the dead

Other parts of the Diablo II Necromancer’s kit simply couldn’t fit into the modern context of Diablo III. Take Iron Golem. That’s a really powerful, compelling fantasy: you sacrifice some legendary weapon or piece of armor, and give its legendary power to your golem. But every time we tried thinking about it we fell into a rabbit hole of different problems. You’d be deleting legendary items, for instance, so then what happens if you disconnect? Would you never be able to fully log out of the game? How specific do we get in the traits adopted by the golem — should it depend on the color of the item? But if it just depends on the rarity of the item, how meaningful is the choice and sacrifice you’re making?

We also talked about trying to make some sort of “gem golem,” summoning different golems based on the gem that was socketed in your helm. Players already have tons of gems in their stash, plus that would encourage them to switch out between all five different colors. But it got really complicated really fast, and we felt that it was straying pretty far from the undead summoner fantasy we were going for. Same thing with the Fire Golems from Diablo II, they felt way too elemental. We wanted to go for a reanimator vibe for the character: not using elemental spells or flashy tools, but harnessing the power of blood, bone, and flesh were core to the character’s skill set.

The plus side of all this is that, as you can probably tell, we were already dictating our design decisions with the mentality of: “What sounds cool? Let’s make that.” At one point, for instance, Julian Love (lead FX artist on Diablo III) said during a meeting: I want to do this visual where we summon everyone into the land of the dead! That was the whole pitch. So I agree, “Ok, that sounds friggin’ cool, let’s do it!” But what does that mean for gameplay? The answer, fantasy-wise, is that if I took you to the land of the dead, that’d be where everything that’s dead exists, so you would have unlimited corpse fodder. So we made a timer that let you use all your corpse skills at will for some amount of time.

(Figuring out the corpses was a whole feat unto itself—I’ll go into more detail about that in a future post.)

As we continued to have fun with ideas, give them legs, and then really run with them, we got to expand on areas of the Diablo II Necromancer that I felt had been left unexplored. Blood magic is the biggest example. D2 had the Blood Golem, and I thought that was so cool when I first played, but it was the only blood magic in the game. If you’ve watched fantasy movies or anything with a dark supernatural element to it, there’s always someone cutting their hand and casting a spell. The fantasy, which is perfect for the Necromancer, is a ritual sacrifice that gives you stronger than normal magic.

We looked at the Blood Golem and thought: “Let’s take that, and blow that out into an entire aspect of the class.” We made blood versions of spells that would be more powerful, but the added cost is that you’re paying for these spells with your health. And then there are blood-specific spells that heal you, so it becomes a question of how much health you’re willing to use, and how risky you’re willing to play. This was a single element that existed very lightly in the D2 Necromancer, and we managed to make it a huge part of the whole class.

The truly rewarding part of working on the Necromancer was that it gave us an opportunity to look back at not only Diablo II, but much of the original design of Diablo III as well to see how we could improve our craft. We’d already set out to encourage more diverse playstyles with the Loot 2.0 update and Reaper of Souls, dropping valuable items that encourage you to try out different abilities and passives so you’re not just using the same six spells the entire time. Seeing those go over well with our players allowed us to keep pushing ourselves in this direction with The Necromancer.

One thing I really wanted, for instance, was for everything in the Necromancer’s kit to have a strong clarity of purpose. I remember reading through all the curses that existed in D2 and thinking “these are redundant.” There was one to amplify damage, another to lower resistance, another to decrepify…ultimately they all did the same thing: make that guy you’re attacking die faster.

We’d definitely already improved abilities in Diablo III, but we still had some problems with that same kind of redundancy and confusion. No matter how you build a Demon Hunter, for example, you’re going to have six different active abilities that all cost you resources to cast — we call these “spenders,” as opposed to “builders,” which regenerate resources for you. How do you decide which is the best one? We gave the Necromancer three spenders. That’s less than any other character in the game, which might seem odd, but we had to keep asking ourselves: “Do we really need a fourth one?”

Take Bone Spear. We took Teeth, which was a low-level skill in Diablo II that dealt damage in a cone shape, and made it a rune for Bone Spear. Earlier on in Diablo III’s development, we might have made Teeth its own separate skill. But I started to realize that the essential purpose of the skill is to just deal damage in a shape. So then how many shapes do you need? You have a straight line, which is the base Bone Spear, and then you have a cone with Teeth, and one that erupts on impact with Shatter, which is basically a Fireball. People understand cones and fireballs, we don’t need to make them spenders #4 and #5, because if we did then you’d constantly be second-guessing yourself. 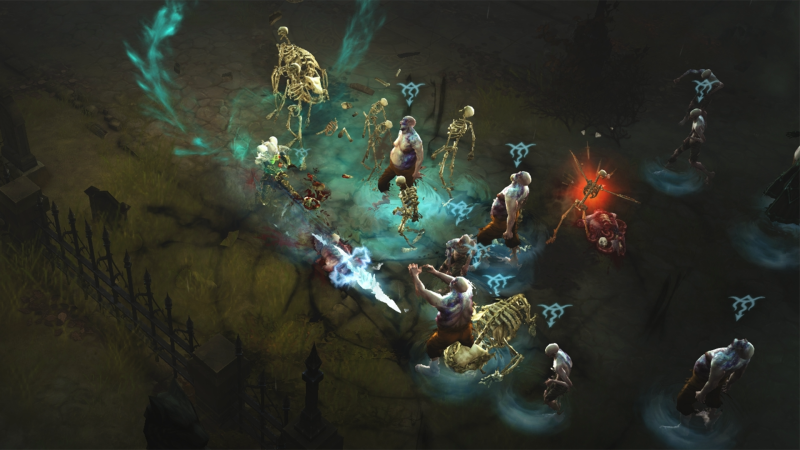 Above: The Necromancer’s Bone Spear became the primary “damage in a shape” ability.

I like to think that we can take the lessons we learned from Diablo III’s early development, and how we improved our craft with Reaper of Souls and the Necromancer, and bring them all with us into today’s Diablo. But right now I’m still just trying to process the fact that I got to be one of the people who made the new Necromancer, and that players seem to love the character. On a professional level, I’m really proud to be able to point to this character. And on a purely personal level, I think about how my buddies and I used to run around playing Diablo 2 exploding corpses. Now they get to corpse explode my stuff!

Speaking of exploding corpses, I’ll go into more detail about how we figured that out in a second piece on Thursday.

Travis Day is a game designer on Blizzard Entertainment’s Diablo III team, who contributes to the development of new game features and class improvements.