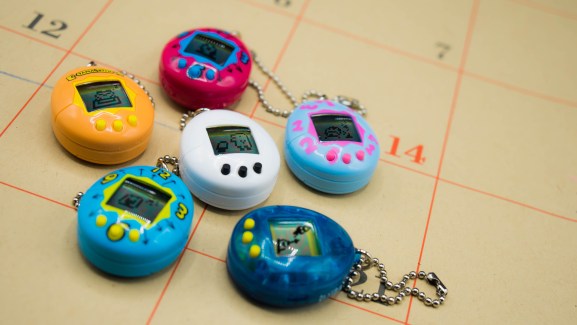 The retro craze is in full swing, and Bandai America is adding adorable fuel to the flame by bringing back Tamagotchis. It announced today that on November 5, it will be rolling out a limited supply of the virtual pets to stores globally. The new Tamagotchis will cost $15.

Before Neopets and Nintendogs, Tamagotchis were the original virtual pets that taught children everywhere about mortality and the consequences of their own inactions. They were a staple in the ’90s, egg-shaped handheld devices that housed a tiny digital creature for you to love, feed, and play with. It’s now celebrating its 20th anniversary with a miniature version. The mini Tamagotchis will feature six designs from the original Japanese launch, and each will also have six characters to choose from.

“There’s a huge trend now with ’90s nostalgia, so it fits right in with what we’re seeing happening in pop culture,” said Liz Grampp, vice president of marketing and brand management at Bandai America, in a phone call with GamesBeat. “And then the other reason is, we made an announcement from our Japan headquarters that we were re-releasing Tamagotchi in Japan, and we got such a huge outpouring of fan demand and adoration that it just reinforced our decision that now was the time to bring it back to the U.S.”

“When it first came out, and even today, it has a couple of things,” said Grampp. “One, it’s that basic human emotion of nurturing. Everyone loves to take care of a little pet. It’s fun and it’s cute. It goes right to your heart. I think it was also the first mobile device of its kind. It really broke through, in 1997, because it was a small portable game device that nobody had ever seen before.”

This is just one more addition to the many retro devices and titles that have been making a comeback as of late. Nintendo saw success with its NES Classic edition, and the SNES Classic just came out a week or so ago. It’s also bringing back arcade games with its Arcade Archives on the Switch. And speaking of classic arcades, the Ataribox will soon make Atari’s whole back catalog available in our living rooms. In broader pop culture, we’re also seeing revivals of everything from the Magic School Bus to a new show from ’90s science icon Bill Nye.

“I definitely think there will be a huge millennial engagement. It’s something you grew up with. It’s iconic,” said Grampp. “But I also think those same millennials will introduce that to the kids in their life, because it’s so much fun. The gameplay is enduring, even if the delivery is a little bit retro, with the pixelated style.”