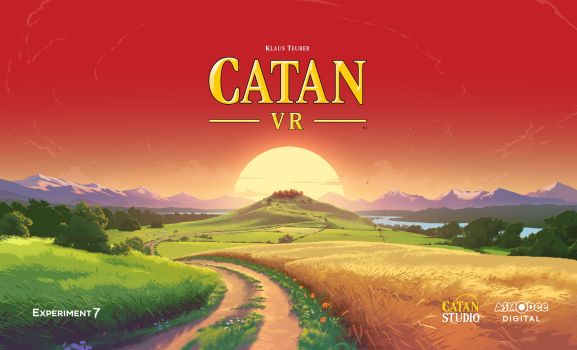 Settlers of Catan is coming to virtual reality thanks to Experiment 7, a studio dedicated to making tabletop VR games.

This week, a friend of mine said he wanted to be able to play games like Dungeons & Dragons at a virtual table. Oh, no problem, I said — check out Roll20, an app that helps people gather for role-playing games online. But then he said, “No, I mean virtual as in virtual reality.”

Well, duh, I thought. I should’ve known that. But my friend has a point — role-playing experiences could be a killer app for VR. But how would it look?

Experiment 7 is working on translating board games to VR with its Magic Table system — it’s done chess and is now gearing up for Settlers of Catan. Ubisoft’s Werewolves Within is missing the crucial facial and body cues you need for party games. VR devs have a long way to go in nailing tabletop board games before heading into pen-and-paper RPGs.

Heck, how would they even look? Social AR and VR could be killer apps — Microsoft certainly seems to think so — and you don’t get much more social than RPGs. Would we be sitting around a table, rolling virtual dice? Would we be manipulating miniature figures on maps? Or would we have avatars, swinging swords and slinging spells at orcs and beholders?
OK, I could get behind that last one.

3rd Eye Studios announced today that it has closed a $1 million round of funding. The company will use the investment on its toolset, 3rd Eye Core, which is a cross-platform suite for PC, mobile, and virtual reality game development. 3rd Eye Core is testing in China and Finland. It will have an official launch some […]

Founder Brian Mullins has stepped down as CEO of the augmented reality startup Daqri. He is being replaced by Roy Ashok, a former Qualcomm executive who has been serving as chief product officer of the AR company for two years. Los Angeles-based Daqri has been working on AR devices, such as connected smart glasses for […]

Nokia has announced plans to “halt” development of its Ozo VR camera, citing “slower-than-expected” virtual reality adoption in the digital media realm. It was back in July 2015 that Nokia first announced the Ozo VR camera, a device that sported eight synchronized shutter sensors and microphones for stereoscopic three-dimensional video. With a starting price of $60,000, […]

When Microsoft announced its Windows Mixed Reality platform last week, it talked about how the combination of virtual reality and augmented reality (which Microsoft calls mixed reality) would create a new era in computing. Alex Kipman, technical fellow at Microsoft and the researcher behind Microsoft’s HoloLens AR headset, went on stage at an event in […]

This week, Neill Blomkamp, the Academy Award-nominated director of District 9, unveiled a short film that he made with the Unity Technologies game engine. At Unity’s event in Austin, Texas, Blomkamp’s Oats Studios showed off Adam: The Mirror, a 6-minute film that was a sequel to Adam, a short film that Unity built as an internally produced showcase demo last year. […]

Sunken is a virtual reality game that plunges players into the ocean deep to explore shipwrecks. Though it’s a low-stakes hidden object game, it’s tinged with hints of H.P. Lovecraft, and the environments evoke a sense of dread. It launched today for the Samsung Gear VR. Tapps Games has a history as a mobile studio. It […]

Valve’s 2.0 Base Stations Will Have New Mounting System, Four Of Them Can Cover Huge Rooms

Valve Software’s Joe Ludwig dumped a cache of information about the upcoming 2.0 base stations the company is preparing for release. While the update from Valve is directed toward manufacturers building on top of its tracking technology, the information offers some tantalizing details about the new hardware. (via Upload VR)

Japanese company Square Enix is looking to broaden the VR storytelling conversation by bringing 3 genres together into one incredible VR experience with Project Hikari: Tales of the Wedding Rings, which made its US debut at New York Comic Con. (via VR Scout)

With ARKit already baked into the mobile operating system of “hundreds of millions of iPhones and iPads,” the massive potential install base means there’s plenty of reasons for developers to start making new augmented reality apps for Apple’s App Store. Now Udacity, the for-profit online education site that was spawned from free Stanford University computer science classes, has created a course that says will take you one month to complete so you can start making your own AR apps for iOS. (via Road to VR)

Depending on which analysts you choose to believe, Windows Mixed Reality headsets will either sell strongly, outselling the Oculus Rift by two-to-one and the HTC Vive by ten-to-fifteen percent in the fourth quarter… or get off to a slow start, with VR remaining niche. (via Arstechnica)