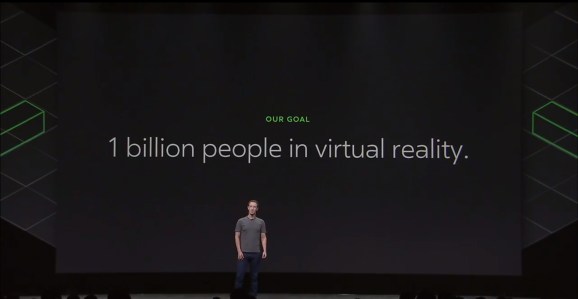 Mark Zuckerberg, CEO of Facebook, announced an ambitious goal to make virtual reality accessible to everyone.

“We are setting a goal,” he said. “We want to get a billion people in virtual reality.”

Zuckerberg made the announcement at his company’s Oculus Connect event at the San Jose Convention Center.

One of the key ways Facebook will get there is through the Oculus Go, a wireless VR headset that will sell for just $200. Zuckerberg said it will be available next year, after developers get their hands on a developer version, code-named Santa Cruz.

The big headset is not great and Facebook is working on it, Zuckerberg said. Some also say VR is isolating.

“We all have limits to our reality, and opening up more of those experiences to all of us is not isolating,” he said. “It is freeing.”

Zuckerberg pointed to Dorothy Howard, an 80-year-old British grandmother who uses the Rift to visit places because she is no longer fit enough to go on vacations. You can use features like Facebook Spaces to get together with coworkers or relatives in distant places.

He also praised Echo Arena, a game for competitive gamers that is a lot like Ender’s Game.

He said the company needs to find the affordable sweet spot, which he says is the Oculus Go headset. Santa Cruz, the new wireless headset for developers (which will eventually ship as Oculus Go), will be available early next year.