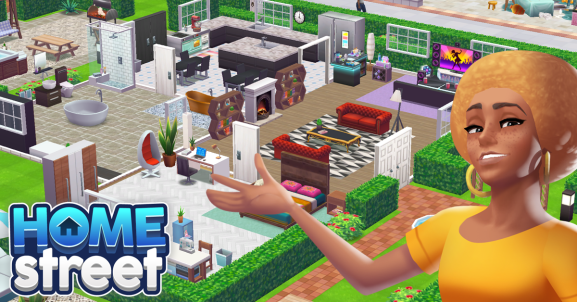 Developer Supersolid raised $4 million for its casual mobile games such as Home Street, its latest hit. Index Ventures, a venture capital firm that has invested in other hit mobile studios such as King (Candy Crush Saga) and Supercell (Clash Royale), led the round.

“The core team at Supersolid was responsible for many of the successful games at Playfish, a prior Index investment,” said Ben Holmes, venture partner at Index Ventures, in an email to GamesBeat. “They were not seeking an investment at the time, but alongside Initial Capital, we persuaded them to take a small seed investment in 2013. This investment underscores our belief in the team and their formula for making fun and distinctive games.”

This marks Supersolid’s second round of investment, and it will go toward growing its London-based team as well as its games. It will be trying new marketing angles with its latest title, Home Street, which is a life simulator where players can join a neighborhood, customize the appearances of their characters, chat with friends, and participate in themed events. It’s a free-to-play, with both single and multiplayer modes, and it will be out on iOS and Android on October 12.

“For Home Street, we also want to invest in innovating on new marketing channels,” said Supersolid co-founder and CEO Ed Chin in an email. “We will be bringing players richer features and more content through partnerships with entertainment, retail and lifestyle brands. The first partnership kicks off with a major Grammy Award-winning artist, to be announced soon.”

Supersolid reports that it has over 50 million downloads worldwide so far. Previous games such as Food Street, a restaurant management simulator, have seen success. Though Food Street launched nearly two years ago, it was downloaded over 3.2 million times on iOS and Android in the last 12 months ending in September 2017, according to market researcher App Annie.

“In Q3 2017 alone, Food Street has seen over $1.3 million in consumer spend across iOS and Google Play worldwide,” said Christine Kim, communications manager at App Annie, in an email.

“I think a big part of our success comes from the long experience we have in the team for developing engaging social and casual free-to-play games,” said Chin. “Much of our senior team have worked together for many years prior to the founding of Supersolid, and together we created some of the most successful early free-to-play games, which happened to be on Facebook.”

“Both King and Supercell, like most other successful mobile games companies, have at their core a team of people who have worked together for a long period of time and experienced failure and success together,” said Holmes. “However, there are relatively few investment opportunities where this is the case.”

The mobile game market grows every year, and analysts project that it will reach $65 billion by 2020. Its revenues surpassed those of PCs and consoles this year, and big publishers have been releasing mobile titles at a steady clip.

“Firstly, the landscape of mobile games is undoubtedly getting more and more competitive. As the sheer size of the market has become clear, we are seeing more developers enter the market, and they are on average investing more in developing each game,” said Chin. “Secondly, the mobile games market has seen high saturation in particular game genres, but there remains a lot of opportunity in mastering new genres. We believe this to be especially the case for several under-served genres with a wider casual audience.”

Supersolid looks to tap into that audience, not only by building out features in its games, but through community management that ties in closely with customer service. Chin says it’s all done in-house, led by head of community Beverly Myshrall-Quenelle.

“Food Street — launched in 2015 — is updated more than once monthly, as Home Street will be, so our community really is able to influence how our games evolve,” said Chin. “On top of answering direct customer support messages, emails and reviews, we manage multiple social media pages. Supersolid and Food Street Facebook pages alone, together have over a million followers.”

It took Supersolid over two years to develop Home Street, and Chin says that people often underestimates the excitement in the casual market. On top of that, mobile gamers now also have higher expectations because of the rise in quality and the competitive market.

“We believe that what the market usually refers to as casual audiences, are increasingly excited by mobile games that offer greater levels of depth and interaction, whilst still remaining accessible,” said Chin. “This is where Supersolid’s strengths lie, and this is the opportunity we believe that Home Street is perfect to seize on.”