One of the very first things I said after we’d officially decided to bring the Necromancer back for Diablo III was: “If we’re going to make the Necromancer, he has to explode corpses, and he has to revive things.” We all agreed that not having the Necromancer do stuff with corpses was just a nonstarter. But then the problem became: “How does the Necromancer get the corpses?” This was the tricky part; we spent a lot of time trying to figure out how corpses would actually work if he did have them — which, again, he absolutely needed to.

For all their connections to one another, Diablo II and Diablo III are very different games. Diablo II was built from the ground up to have the Necromancer character and the corpses that he used for so many of his abilities. Whatever you killed would keel over and lay on the ground dead. Then you’d use a skill to explode its corpse or revive it. 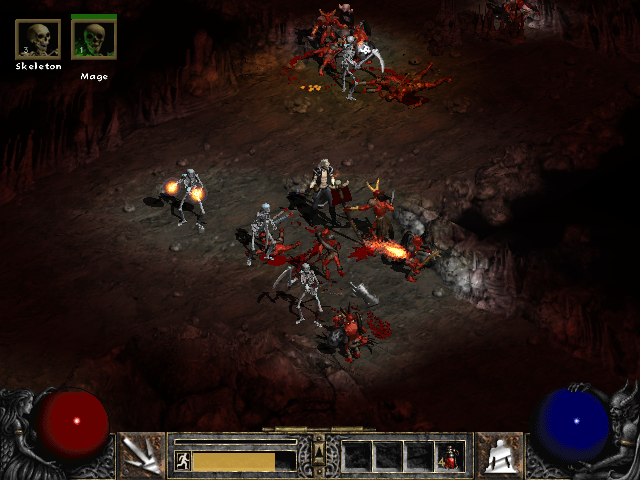 In Diablo III, we didn’t have that luxury of corpses already having a significant presence in the game. Really, they had no presence at all.

Where have all the bodies gone?

The relative lack of corpses was originally a key departure from Diablo II’s aesthetic and mechanics that we leveraged to make Diablo III’s combat feel so satisfying. Pre-Necromancer, the death mechanics of Diablo III did many horrible things to the bodies of monsters. If you’re a Barbarian and you bash a skeleton, that skeleton flies across the entire screen. If you hit someone with a holy spell, they’d disintegrate into the air. In many cases, we didn’t even have a body once a monster was dead. But now we needed there to be a corpse because the Necromancer needs to know how their gameplay is going to work. 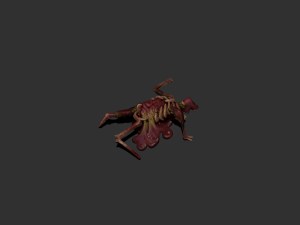 Above: A generic corpse from Diablo 3

You can start to see how problems would arise once we got down to building the new Necromancer. Without some new type of corpses, if a Wizard in your party kills something with Arcane Damage, then you’d start yelling at them for disintegrating the corpses you need. Or if a Barbarian hits some bad guy across the screen, you’d have to chase the body across the room — not really what you’d expect or want to do as a commander of the undead. We quickly realized that this meant we were going to have to decouple the original visualization of killing an enemy — any enemy — with the new gameplay of having a fresh corpse to use.

Mobs of enemies can get pretty huge in Diablo III, and initially our engineers were worried that there’d be too many corpses. So then we thought: “Well, maybe you don’t always get a corpse, maybe they’re rare.” We tried that out, and we got a lot of feedback saying it was hard to understand when corpses were available and when they weren’t. So then we said, “alright let’s go to the other end of the spectrum”: You always have corpses, and we’ll just placate the engineers by having a reasonably low limit to how many can appear on the screen so you don’t end up with 800 corpses that crash your whole system. We had one feedback session early on in one of our corpse prototypes where the same person said, back to back, “Corpses are way too loud,” — because at that point they were these glowing beams announcing here’s a friggin’ corpse! — and then he added, “also, I can’t see corpses ever.” 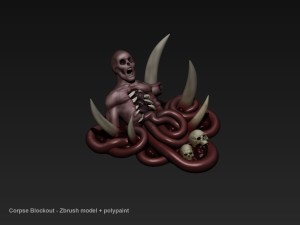 Above: A Diablo 3 corpse concept made with zbrush

A corpse is a corpse (of course, of course)

Through lots and lots of iteration, it became clear to us that we needed to establish two standards when it came to corpses. First, players need to understand that when something dies, it’s going to leave a corpse. And second, they have to be able to look at the combat space and understand visually, at a glance, what is and isn’t a corpse. Ultimately the corpse design informed our final skill design for the Necro. There were some cool things we talked about wanting to keep in his kit from Diablo II, for example, but simply couldn’t work with the new corpse paradigm we settled on.

We talked a lot about having corpses of different sizes, for instance, which is how they worked in Diablo II. There’s definitely a strong fantasy there: killing an elite character and then harvesting all that power. But things were just too different otherwise for that one aspect of corpses to remain the same. In Diablo II, Corpse Explosion dealt damage as a percentage of the health of the monster you just killed, so what you’d do is spend a long time killing the biggest and scariest guy who has more health than everything else on the screen, then you would cast Corpse Explosion, and everything would be dead.

Above: A low-poly first pass at what Corpse Explosion could look like.

The entire corpse dynamic in Diablo II operated on a basic structure of: you cast Corpse Explosion on a corpse, and then that corpse blows up. The pacing of combat in Diablo III is so much faster by comparison; you’re killing entire swarms of monsters at a time. When we tried keeping the one-target, one-corpse model from Diablo II, then, we saw almost immediately that people would cast one or two spells and then spend ten seconds blowing up every individual corpse. Those explosions would yield more corpses, so they’d blow those up, and the cycle would just repeat itself until all they were doing was blowing up corpses and nothing else — not using any of the Necromancer’s other abilities. The gameplay got too one-dimensional.

So we established relatively quickly that unlike in Diablo II, corpse skills would target areas instead of individual corpses. That way you can think more in terms of, “I want to blow up everything over there,” without having to worry about clicking 20 times in a row. But this also meant that we couldn’t make corpses cost anything. Because if you aren’t targeting a specific corpse and miss an ability so nothing happens, it costing you a resource (the Necromancer uses “essence”) or a cooldown would make you feel resentful.

Bring out your dead!

Above: Concept art for the exploding corpse.

Clarity of gameplay was the value we held above everything else we did for the Necromancer’s corpses. The process started to get really fun and interesting once we’d settled on our basic rules: that all corpses would be the same, that they would deal a set amount of damage, that they didn’t cost anything or have a long cooldown, etc. Then we could start experimenting, layering more ways for players to have a broad variety of options. One of the legendary sets even makes your golem poop out corpses (though technically the idea is that he’s shedding body parts for you to use as fodder). Or we gave skills like Blood Rush and Skeletal Mages specific runes that would generate corpses as well.

Initially we started thinking about these kinds of features to help players avoid situations where they’d suddenly run out of corpses—a corpse build Necromancer was never a strong option against bosses in Diablo II. But really the corpse generation mechanics were the same as all the other elements of character design we bring to Diablo. We want to give players a really big toolkit, hand them that toolkit and say, “Have fun, do what you want to do with it.”

It’s all the better when the “tools” are all corpses, which is why I think we like these kinds of dark magic users in the first place.

Travis Day is a game designer on Blizzard Entertainment’s Diablo III team, who contributes to the development of new game features and class improvements.