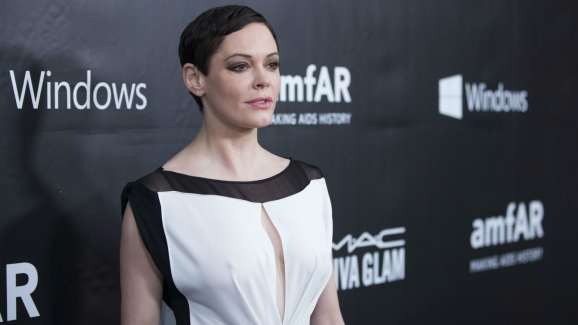 Amid a surging wave of sexual harassment and assault allegations against movie mogul Harvey Weinstein, actress Rose McGowan has emerged as one of the most outspoken critics.

In the New York Times story detailing how Weinstein paid off accusers for decades, McGowan was reported as one of his victims who was paid a $100,000 settlement in 1997. As big Hollywood names have expressed shock over the allegations, McGowan has been calling out the industry on Twitter for being hypocritical, claiming that many knew about Weinstein’s behavior, including actor Ben Affleck.

All of you Hollywood “A-list” golden boys are LIARS. We have just begun. #ROSEARMY pic.twitter.com/r5yPL2A3bC

TWITTER HAS SUSPENDED ME. THERE ARE POWERFUL FORCES AT WORK. BE MY VOICE. #ROSEARMY #whywomendontreport

It’s not clear which tweets specifically were deemed inappropriate. But it is further evidence of the controversy stirring around how Twitter monitors content.

McGowan’s tweets were clearly angry, and for good reason. But she doesn’t appear to have directly threatened violence against anyone. And certainly they could be deemed newsworthy, an exception the company applies to people like President Trump when he posts insulting, angry messages of his own.

The company has been promising more transparency around these decisions for a while. This might be a good time to start.

Update: Well, start they did. This afternoon, the Twitter Safety cccount tweeted that the reason her account was temporarily suspended.

We have been in touch with Ms. McGowan's team. We want to explain that her account was temporarily locked because one of her Tweets included a private phone number, which violates our Terms of Service. 1/3

Twitter is proud to empower and support the voices on our platform, especially those that speak truth to power. We stand with the brave women and men who use Twitter to share their stories, and will work hard every day to improve our processes to protect those voices. 3/3

when will nuclear war violate your terms of service? https://t.co/72FiiyoZ59

Of course, Twitter typically says it can’t comment on private accounts. But in this case, adding some clarity was probably the right move. But the company also should have known this was likely to cause controversy and still needs to figure out a better way to explain its decision making.