Middle-earth: Shadow of War is getting a some flack for the way its story ends. But the ending isn’t the problem. Rather, it’s the fact that the final cinematic is hidden behind 10 to 20 missions where you have to laboriously take over fortresses. There are only four fortresses involved, but you have to keep on taking them or holding them over and over. Fans aren’t all that happy about this, since they believe you can bypass the tasks by spending a lot of money on loot crates.

But that isn’t really true, and it certainly wasn’t the design team’s placement of the ending cinematic, said Shadow of War creative director Michael de Plater in an interview with GamesBeat.

This story has narrative spoilers — Ed.

Certainly, fans have noticed that getting to the ending without spending isn’t easy to do, and it adds many hours to the game. That’s good if you enjoy the missions, but it’s bad if you just want to know the real ending.

Shadow of War has 63 missions that take you through most of the story of Talion, the Ranger of Gondor who teams up with the wraith (ghost) of Celebrimbor to take on the Sauron, the Dark Lord. The number of missions multiply if you fail any one of them, as I did many times. That extends the length considerably. But de Plater insists that you do not have to buy loot crates with real money to get to the endings. I would agree with that, as I never bought anything in the game and managed to finish. 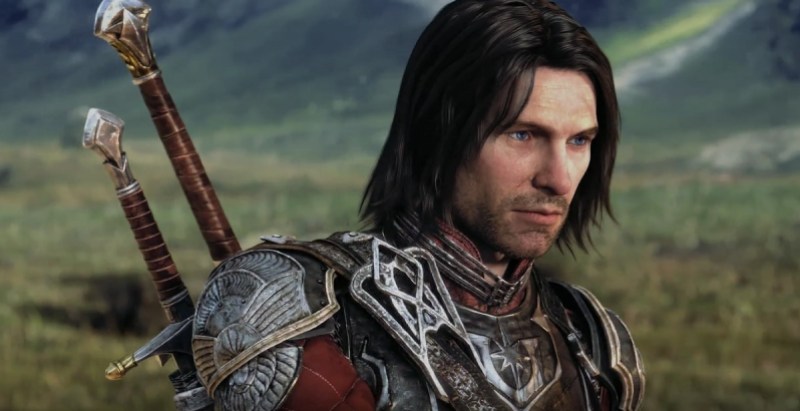 Above: Talion is the Ranger of Gondor who challenges the Dark Lord.

Most of the narrative comes through the Minas Ithil campaign, but this ends without a true resolution. The story splinters into separate threads, including a campaign for the Elf warrior, Eltariel, and another short four-mission campaign related to Shelob, the giant spider who takes the form of a woman in a black dress in Shadow of War.

At first, Eltariel and Talion are allies, fighting side-by-side with Celebrimbor against the Dark Lord’s forces. But Eltariel’s campaign leads to a rift between the wraith and the ranger. And then Eltariel and Celebrimbor go on to engage in an epic fight against Sauron in the Dark Tower. That’s the ending in the video. In this “ending,” the battle is up to you. Your skill decides which way it goes, and that’s the way the ending of a game should be.

Shadow of War has had a huge reaction from fans on social media, de Plater said. A fair amount of it has focused on the multiple endings. De Plater said he considers the cinematic below to be the true ending of the game. It suggests that there is more to the story ahead, as Sauron hasn’t been defeated. He noted that you’ll be able to play Eltariel in upcoming downloadable content. But he said he isn’t able to share yet whether there will be a third game or not. In any case, the ending that De Plater views as the true ending leaves room for more conflict with Sauron in the future.

The battle and cutscene in the above video appears to be the end of the story, but then it continues. Our attention returns to Talion. He survives, and he continues to wage his civil war against Sauron and his Orcs.

Then the grind begins. You have to fight through 10 stages of a campaign in the Siege Battles section. There, you start taking over the four fortresses … and then defend them, again and again. In the first stage, there is just one task, defending one of the fortresses. This task can be demanding because you need a half-dozen or so Orc captains to take or defend a fortress. You have to capture and convert those captains one at a time, as you wander through the landscape around the fortress.

De Plater said that he doesn’t view the Siege Battles as a pure grind. One reason is the Nemesis System, which records the choices you make and what you do once you capture, kill, or shame the Orc captains. As you progress through each battle, where Talion himself has become undead, you can run into the same Orcs over and over. And their reaction to you changes. You may have killed a captain earlier, but he may come back in the later battles as an undead Orc, itching for revenge.

These moments make the player feel like the game is truly reacting to their gameplay, and that’s something the Siege Battles are meant to amplify. So the players are meant to enjoy the variation that results in different outcomes in the Siege Battles and different dialogue due to the Nemesis System. The battles also magnify the theme of death and undeath, as Talion fights these final battles as an undead character, and he goes up against Orcs who are either alive or undead.

“The game is at its best when it is not rapidly or immediately consumed,” de Plater said. “There’s a lot of game there with 50 or 60 hours. People will build stories over time. The game is even better when people can enjoy it like that.”

In the Siege Battles, the number of tasks grows with each stage. In the very last stage, you have to successfully defend or retake all four fortresses. If you fail to defend a fortress each time, that means there are eight battles alone in that final stage. And once you beat that citadel, you get the final cinematic about Talion’s fate.

Here’s the video of that. The final video’s credits also include an extra scene in tribute to Michael Forgey, executive producer at Monolith for the game, who died in 2016. It depicts the Forthog Orcslayer fighting a bunch of Orcs. He normally appears in the game when you need to be saved.

I knew that Talion’s story would have a tragic end, but the final cinematic is a bit of a letdown, since there is nothing you can do about it. You fight all that way, and then your fate is decided for you in the end. You can’t do anything about what happens.

It also suggests a certain finality to Talion’s tale. Does it mean that this sequel is the very last Shadow game? I would have thought that they might have tried to do a trilogy, but the ending you see here doesn’t leave room for that. You see Talion’s fate. It seems final, and so you can see that it really is something like a true ending to the tale.

But de Plater says, “We didn’t really think of the final ending as the true ending. We thought of it as a bonus ending. It was like the extra credit sequence you get a the end of a superhero movie. At the same time, we learned people loved the Nemesis System. We wanted to make sure we gave people goals and keep them playing. In hindsight, we could have used the user interface to present it more clearly.”

Asked whether there is a third game, de Plater said, “I can’t say too much.”